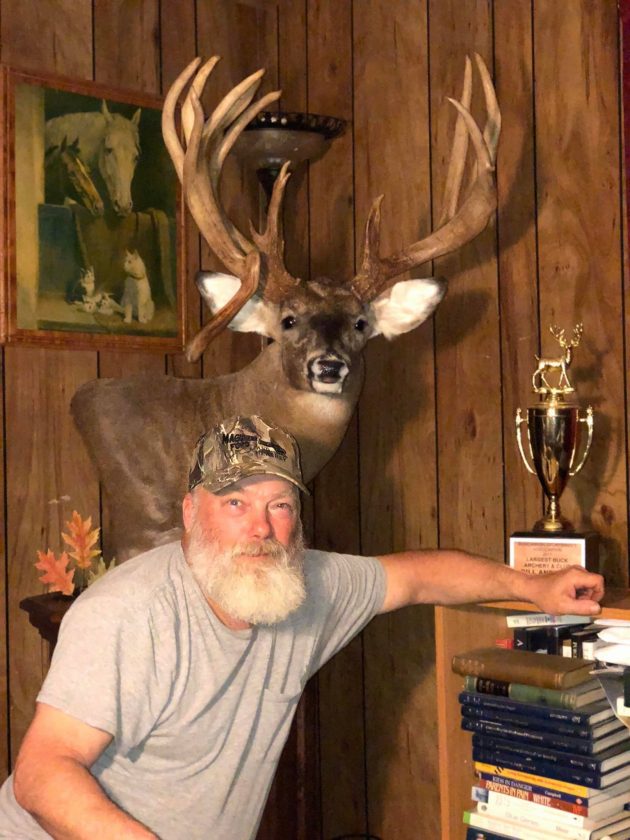 Submitted photo
Bill Andrews poses with the monster buck he shot during the 2017 archery season. The buck is the largest ever killed in Perry County.

It’s hard to believe that it was eighteen years ago that the Pennsylvania Game Commission first instituted antler restrictions. Although it was extremely unpopular then, nearly two decades later, some would say that the changes made have led to more and more mature bucks being harvested in the Keystone State every year. Currently, more than 50 percent of the Top 60 bucks taken in the state have been killed since 2002. I’ve tracked down some of the largest and prettiest bucks harvested in the last few seasons and the hunters who took them in order to bring you their stories in a several part series.

Part two of this series takes place near Duncannon in Perry County, with a man named William (Bill) Andrews and a buck that would climb high in the ranks of the PGC Record Books among non-typical bucks taken with archery equipment. Andrews is no stranger to hunting as he grew up farming and hunting on the same piece of land he took his monster on, for more than 50 years.

“I rarely shoot a doe anymore. I’ve killed some nice bucks over the years and I don’t really need the meat, so I’m pretty much a trophy hunter,” Andrews said. “My grandkids can shoot whatever they’d like, but I’m very selective.”

Just by talking with him, you can tell that Bill enjoys spending time practicing archery with his grandsons, and hunting with them any chance that he gets. That is where this story all began.

“My one grandson had a football game on Friday night and we had planned to hunt on Saturday morning. He came over after the game to spend the night, and we took a ride up the hill,” Andrews said. “When we got to the top of the hill, there were about 20 doe in the field and there laying in the middle of all those doe was this buck.”

This would be his first sighting of a buck that had all the neighbors within a mile talking about it, and finally confirmed to Mr. Andrews that this deer was everything that was rumored and more.

“The next morning we split up to see if we could get a chance at him and both my grandsons were there,” said Bill.

Try they did, but the opportunity never presented itself, although Bill’s youngest grandson did manage to take a smaller buck that morning.

Then a week later, after a non-eventful morning hunt and a break for lunch, Bill hit the woods again around 4:30pm, and it wasn’t long until the monster would emerge again.

“I rarely use a tree-stand. I’d much rather hunt on the ground,”Andrews said.

So, with a comfortable seat on the ground and his trusty crossbow, Bill sat and patiently waited. Then, the buck he had been waiting for had finally emerged and was making his way toward his direction. As the giant deer walked toward a clearing in range, Bill fired his shot. Unfortunately the arrow slightly clipped a dead pine branch on its way to the deer and drove the arrow further back on the deer than he would have liked.

“You hate to see it, but it happens to archery hunters all the time,” Andrews shared.

Bill and his family tracked the deer until the blood trail ran cold, and continued the search for hours. Despite many failed attempts to find the deer, the entire family never gave up the quest to recover the monster buck.

Eighteen hours later, one of the largest non-typicals ever killed in the state of Pennsylvania with archery equipment, and the largest buck ever killed in Perry County was finally recovered. Scoring a whopping 204 and seven-eighths inches in the Boon and Crockett Scale, Bill Andrews’ 2017 archery buck still sits in third place for its class, respectively. Great job Bill!

Dancing With the Stars is back