It is difficult to comprehend the amount of information there is out there on our American history. Researching and reading information takes me from one exciting event to another, eventually reaching our current history. For example, June 14, 1775, became an important date in American history and the events of that day impact us today. It is the date that the newly commissioned Gen. George Washington reached Massachusetts to take over as commander of the new Army and its Revolutionary War. The battles of Lexington and Concord had already happened. If you haven’t already guessed it, that is the date that the United States Army was born. But here on the home front, did people really know what happened “up there” in Lexington and Concord? Going to Massachusetts in that time took a fortnight (about two weeks). It was too far away to be concerned with or even know about. Information took not days, but weeks to be delivered from Massachusetts to the middle of Pennsylvania. However, within five days after the event, the information was rushed to Philadelphia where the Second Continental Congress sat. Men from our area were to play a remote part in this great event and birth date once they were soldiers.

The Second Continental Congress called for riflemen to join the cause. They asked companies of riflemen be formed from Pennsylvania, Maryland and Virginia. Pennsylvania within a few weeks had nine companies of their own instead of the eight requested of them.

“Within 10 days after news of the battle of Bunker Hill had reached the Province of Pennsylvania her first regiment was officered and completed. Many of the eight companies numbering 100 men.” 1

With the initial call by the Second Continental Congress for riflemen to join the cause, William Hendricks and Robert Cluggage responded. Soon to be Capt. Hendricks was selected by the commanding officer, William Thompson, of Carlisle, who was putting together unit captains from the wealthy and those he knew. He found Hendricks was qualified and was appointed to be a captain. Robert Cluggage, who was also appointed captain, commanded the troops from “the Bedford end of old Cumberland County.” 2 Two men from the Mifflin County area were some of the first to enlist. Under Capt. Robert Cluggage was John Davis and under Capt. William Hendricks was William Small. 3

The call for these units of riflemen would change the complexion of the war. Up until this point, the primary weapon was the Brown Bess Musket for the British, a smoothbore that at best, had an accuracy range of 80 yards and only if it is aimed. There is a question as to how much the musket was aimed because there were no sights, the projectile was in the barrel loosely and there wasn’t time to take aim while waiting for the command to fire! Wars were fought under specific rules of engagement, both sides presenting themselves, march toward each other, fire, fix bayonets and charge for the most part. The rifle changed that and created the American way of war. The rifle, while slower loading, in the hands of skilled riflemen, can reach accurately out to 300 yards. This had to do with the internal groove in the barrel called rifling that gave a twist to the patched ball throughout the length of the barrel, spinning it and giving it extreme accuracy. While there would always be a need for the American Continental Line who were also equipped with the inaccurate musket and bayonet to meet the British head-on, those musket men were also giving protection to the riflemen who took longer to load, but were much more accurate. With riflemen killing the enemy officers and soldiers, the war would be shortened with a positive outcome for the Americans.

Of those battalions that went north to assist the northern colonies, one was Thompson’s Pennsylvania Rifle Battalion, of which our local soldiers were now a part. It’s noteworthy that, “long before the term ‘melting pot’ came to be used to describe the American assimilation process this remarkable confluence of backgrounds, interests and purposes occurred literally overnight in the recruitment and deployment of Thompson’s Pennsylvania Rifle Battalion.” 4 Thompson’s was an amalgamation of different ethnicities making up a powerful rifle battalion. One captain, possibly Hendricks, who led William Small, devised a contest to weed out the less skillful. “This unnamed captain drew with a piece of chalk the figure of a nose on a board which he placed at a distance of 150 yards. Sixty riflemen hit the target and were chosen.” 5 Colonel Ganoe gave this evaluation: “The first troops raised by Continental authority became the backbone of the force which finally achieved independence … they made possible the continuance of the Revolution.” 6 Our William Small must have been quite a marksman!

“Six months before the year of independence (1776) began, the riflemen had marched a thousand miles, fought, and disappeared into the haze of oblivion which never has really cleared … Yet Hendricks’ men were among the first half dozen military units from beyond the Hudson to join the Continental Army, and the Hendricks Company was the first of these whose captain led it into an attack on the enemy.” 7

“These were the first soldiers ever to have been enlisted at the call to arms of what is today the United States Government. This Battalion of Thompson’s is cited by the official lineage book of the U.S. Army as having furnished six of the first 10 companies of the Continental Army.”8 These men, including our local soldiers, John Davis and Andrew Small, were then detached to go on what was to become a disastrous ill-fated expedition to Quebec to hopefully secure what would become the 14th Colony. They would eventually become the 1st Pennsylvania Regiment of the Continental Line, which was the first regiment of the newly formed United States Army. Capt. Hendricks would be killed at Quebec. Others went to Quebec from our area. Men such as Capt. Adams, who was the first on the Continental Line from here to be killed at Isle Oxnaux on June 21, 1776. Capt. Adams commanded that Battalion of the Regiment, the Sixth Pennsylvania, which was commanded by Col. William Irvine with William Bratton as first lieutenant. Adams also holds the unfortunate distinction of being the only one from here killed.9 Capt. Hendricks, of the riflemen, would also be killed at Quebec.

Soldiers from our area played an important role at the beginning of the Revolution and the future United States of America, even though we were far from that opening scene of Lexington and Concord, “our local soldiers” were part of the first regiment of the United States Army.

The war would last until a peace treaty was signed in 1783. It took eight long years, but with intrepidity, self-sacrifice and challenges that would be all but unbearable today, they persevered and secured the blessings and liberties we have today and helped forge and shape a nation. Today that same United States Army stands strong, diligent, ever present and ready in the face of our adversaries to do the exact same thing.

“This We’ll Defend,” is the official motto of the United States Army. It refers to the army’s primary purpose of defending the country as one. It dates back to before the American Revolutionary War. When the War Office was created in 1776 to manage the Continental Army, it adopted “This We’ll Defend” as its official motto.

For those of you who follow our American Revolution Round Table of Central Pennsylvania (ARRT-centralpa.com), our next program is June 25 at the Boalsburg Fire Company, located at 113 E. Pine St., Boalsburg, from 6 to 8 p.m. Our speaker will be local historian and volunteer at Fort Roberdeau, Catherine (Cat) Shirf, speaking on Fort Roberdeau and its part in the Revolutionary War. While there is no charge for the program, memberships are available at the event. Donations are accepted.

Mark DeVecchis is an independent historian of early American history. He is a member of the Company of Military Historians, Brigade of the American Revolution, 5th Battalion Cumberland County Militia, Virginia Historical Society and the Mifflin County Historical Society. He and his wife, Valarie, live near Lewistown. 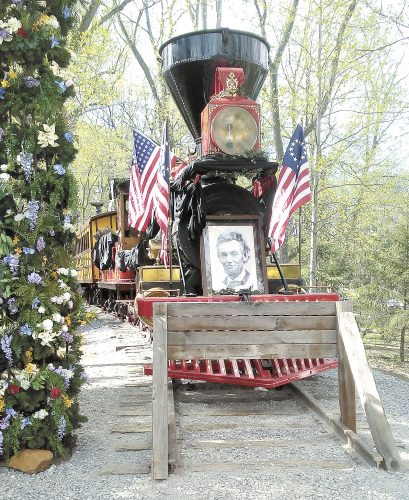