Ronald Fogleman is named to National Aviation Hall of Fame 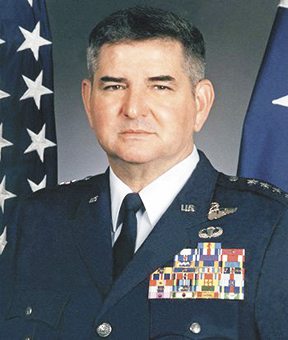 WASHINGTON — Gen. Ronald R. Fogleman, formerly of Mifflintown, was one of four individuals who have been elected by the National Aviation Hall of Fame for its Class of 2018.

Executive Board Member Dr. Kathy Hughes and Executive Director Amy Spowart revealed the names before an audience of nearly 300 attendees at the fall awards dinner of the National Aeronautic Association in Washington, D.C.

Each year, the NAHF Board of Nominations, a voting body comprised of over 120 aviation professionals nationwide, selects a handful of previously-nominated air and space pioneers to be recognized for their achievements with induction into the NAHF. Since its founding in 1962, 237 men and women have been honored with enshrinement into the Congressionally-chartered 501(c)(3).

The NAHF Class of 2018 is a diverse group representing a broad range of enduring contributions to both the advancement of flight and the manned exploration of space:

(The late) William H. (Bill) Dana was a 40 year veteran of NASA, test pilot and aeronautical engineer. He was also the project pilot for the X-15 and pilot astronaut for the X-20, among several other aircraft.

The NAHF was founded in Dayton in 1962 and chartered by the U.S. Congress in 1964. Its mission is to honor America’s aerospace legends to inspire future leaders, which it does through a 17,000 square-foot public Learning Center featuring interactive exhibits, a youth education program, other public outreach programs, its annual enshrinement ceremony and collaboration with like-minded organizations.