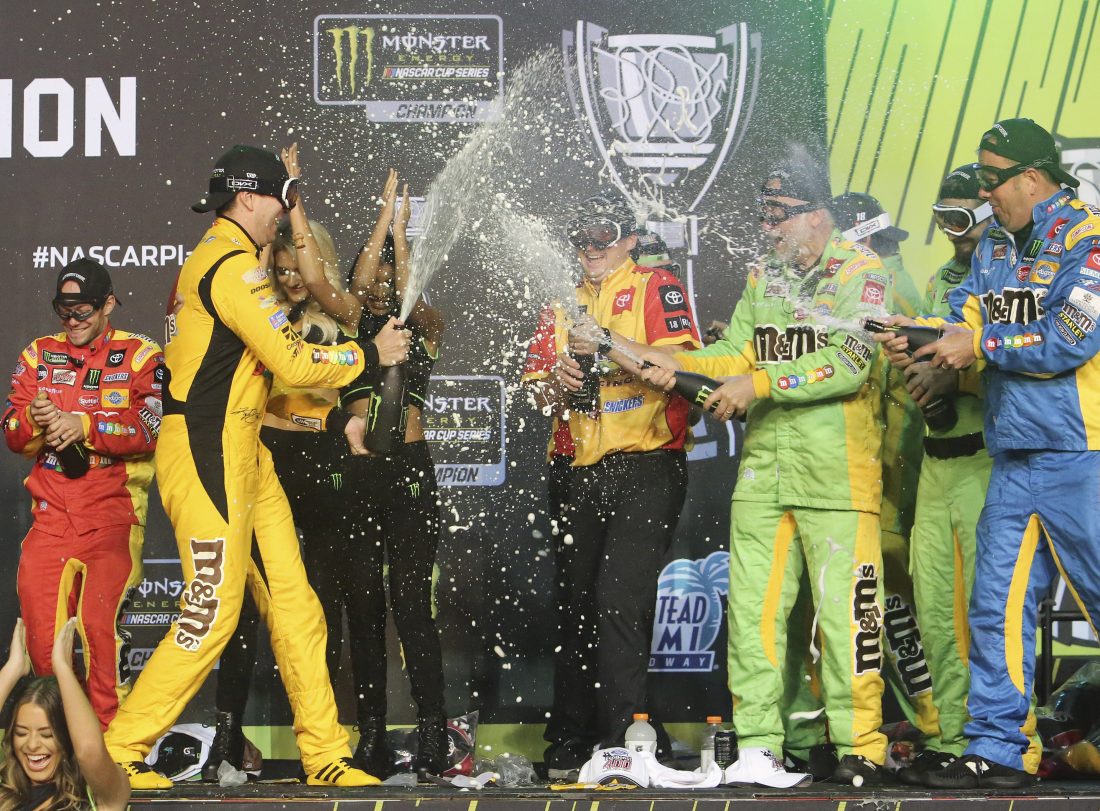 ­HOMESTEAD, Fla. (AP) — Kyle Busch casually collected the championship flag from his team and did a slow, subdued celebratory lap. The most polarizing driver in NASCAR had just won his second Cup title and wanted his true fans to enjoy the moment with him.

It was a lesson learned from his first Cup title in 2015 when Busch ruined the massive championship banner doing smoke-filled burnouts.

Busch won the season finale at Homestead-Miami Speedway to snap a 21-race losing streak and beat Hamlin, Truex and rival Kevin Harvick for the Cup. Busch joined seven-time champion Jimmie Johnson as the only active drivers with multiple titles.

The 34-year-old Busch simply thanked his crew. He’s the 16th driver in NASCAR history to win multiple championships, and one of only five to win titles in both the Cup Series and the second-tier Xfinity Series.

The No. 18 crew climbed the pit wall and handed Busch the championship flag for his post-race celebration, and he was met on the frontstretch by 4-year-old son Brexton, who immediately asked: “Dad, are you going to throw me in the air again?” about their celebratory tradition.

“He was asking if he could get thrown up in the air because we won a race,” Busch said. “He’s a little lighter than the trophy, so I think I’m OK.”

Busch had raced for a second championship in each of the last three seasons and fell short a year ago in part because of his crew’s own pit error. This time, it was Truex and Hamlin bitten by silly mistakes. Truex dominated early but fell a lap back after his crew put tires on the wrong side of his Toyota.

“You’ve got to be perfect, one mistake probably cost us the championship,” Truex said. “I’ve never had that happen. I don’t even know what to say. It doesn’t drive good with the left front on the right front, though, I can tell you that. It’s very tight.”

Hamlin fell out of contention when an aggressive aerodynamic gamble backfired because a large piece of tape placed across the front of his car caused his engine to overheat. Hamlin had to make an unscheduled pit stop to remove the tape.

Truex recovered to finish second, but Hamlin didn’t have enough time to overcome the miscue and was a disappointing 10th.

“I feel like I did all I could. I don’t feel I could have done a better job. I didn’t leave anything out there,” Hamlin said. “I was thinking we got a chance and it just didn’t work out. We got a little aggressive there and it cost us.”

Harvick, the only Ford driver in the championship field, never had anything on long runs for the Gibbs cars and finished fourth.

“On the restarts I could do what I wanted to do and hold them off for 15 or 20 laps,” Harvick said. “This race has come down to that every year. You kind of play toward that and they were quite a bit better than us on the long run. We had a really good car for those first 15 to 20 laps on the restarts and had a lot of speed, we just never got to try to race for it there.”

The finale pitted a trio of Toyota drivers from Hall of Fame owner Gibbs against Harvick, the hand-picked driver of former Gibbs protege Tony Stewart at Stewart-Haas Racing. The Gibbs group had the edge based on its tremendous season — Busch’s win was the 19th out of 36 races for the organization — and the trio insisted it would continue its note-sharing all weekend.

Las Vegas couldn’t chose a title favorite and the four had essentially even odds at the start of the race, even though Busch was probably the least likely contender of the group. Although he won the regular season crown, his last Cup win was at Pocono in June, his playoffs leading into Homestead had been mediocre at best and his mood soured with every missed victory lane.

“We had a cold spell there. It’s been well documented,” Stevens said. “Quite a few questions about it. We’re in such a unique situation, as a competitive team that runs up front with the goal of winning the championship every year, everything we do is to make that happen, right? To win the regular season points championship, then try to maintain that and get to Homestead, that’s what it’s all about.”

Hamlin, Harvick and Truex had all won playoff races, and Hamlin’s win at Phoenix last week gave him all the momentum. But with friend and fan Michael Jordan in attendance, Hamlin failed to win his first championship in his third try. Hamlin is the only driver in the final four without a Cup title.

“Our year was fantastic in every way you can think of, and it just didn’t pan out in one race in our favor,” said Hamlin, who won the Daytona 500 and five other races a year removed from a winless season.

Busch, ironically, had one of his worst races in the pits in last year’s finale as his front-tire changer had hiccups on two stops. But he was flawless Sunday night and led a race-high 120 laps.

“Everybody always says you never give up. We’re no different. We just do what we can do each and every week,” Busch said. “Sometimes we may not be the best, sometimes we may not have the right track position. We had a really good car and I could race around and move around. That’s what’s so special about Homestead Miami Speedway, is the ability to put on a show.

“I felt like we did that there racing those guys. I know it kind of dulled out toward the end. It was exciting enough from my seat. It was a lot of fun to cap off such an amazing year.”

Busch gave Gibbs his fifth Cup title and bookended a season in which the Gibbs cars opened the year 1-2-3 at the Daytona 500. Gibbs this entire year has been mourning the death of his son, JGR co-chairman J.D. Gibbs, and the organization promoted a “Do it for J.D.” theme the entire weekend.

The season ended with a 1-2-3 finish in the finale as it was Busch, Truex and Erik Jones across the finish line for Gibbs.

“I know J.D. was looking down on us all year long,” Busch said. “I mean, damn, what a season Joe Gibbs Racing put together.”