Along with Hults and Sucese, junior Evan Barratt landed on the Second-Team while junior Alex Limoges and senior Peyton Jones were named honorable mentions. For Sucese and Limoges it marks the first time in their careers they have received postseason recognition while Barratt garnered a First-Team nod in 2018-19 and Hults was an honorable mention that same year. Jones earned All-Freshman team and honorable mention accolades following his freshman season.

Sucese, who inked a one-year, entry-level contract with the Arizona Coyotes back in March, became the fourth Nittany Lion in program history to reach the 100-point mark in March of 2019 after a career-high 19-goal season where he added 18 assists for 37 points as a junior. This past season, the Fairport, New York native led the Big Ten and ranked tied for 15th nationally with a career-high 38 points on a league-best 27 assists and 11 goals which tied for 13th in the Big Ten.

The left shot centerman registered at least 29 points in each of his four seasons in Hockey Valley and leaves the program as the all-time leader in points (140) and goals (61) while ranking second in assists (79), shorthanded goals (5) and shots on goal (470). Sucese’s career plus-47 rating is good for fourth all-time as a Nittany Lion.

Barratt, who inked a three-year, entry-level contract with the Chicago Blackhawks back in April, finished second on the team and tied for third in the Big Ten with 34 points on a team-high 12 goals while adding 22 assists this season. He once again dazzled the national audience in 2019-20 scoring a pair of highlight-reel goals that graced SportsCenter’s Top-10. Over the past two season’s Barratt’s uncanny stick skills have appeared on SC’s Top-10 on four separate occasions, climbing as high as No. 2.

Barratt came up just shy of the 100 games and 100-point mark at Penn State finishing his Nittany Lion career with 95 points on 39 goals and 56 assists in 98 games played. His .970 career points per game mark ranks second in program history only behind classmate Alex Limoges’ .971 mark while his 1.34 points per game mark in 2018-19 is a single-season program record. Barratt’s 95 points rank eighth on the Penn State all-time scoring list while his 39 goals and 56 assists are good for tenth and eighth in program history, respectively.

Limoges ranked sixth in the Big Ten with 32 points on 11 goals and 21 assists in 30 games while his 1.07 points per game was good for second in the conference and 26th nationally. In Big Ten only games, he paced the conference averaging 1.05 points per game in 22 games ranking tied for second in league only games with 23 points on nine goals and 14 assists.

Limoges became the eighth Nittany Lion in program history to reach the 100-point mark for his career this past season and will enter his senior season leading all returning Big Ten players with his 103 career points, good for fifth nationally among current juniors and tied for seventh all-time at Penn State.

Jones, Penn State’s all-time wins leader, graduates with 14 program records and registered career-highs as a senior with a .919 save percentage, ranking fourth in the Big Ten and 21st nationally, to go along with a 2.60 goals against average while posting a 18-9-3 record and leading the Nittany Lions to their first-ever Big Ten regular-season championship. Jones’ .919 save percentage and 2.60 goals against average are both the second-best single-season marks in program history.

The senior, who recently inked a two-year AHL deal with the Colorado Eagles, is the Penn State career leader for games played and games started by a goalie with 133 for his career as well as leading in minutes (7866:20), saves (3,685) and points/assists by a goalie with eight. Along with his single-season program record for wins (23), Jones also holds single-season standards in games started (36), saves (983), points/assists (4) and shutouts (2).

Penn State now has 29 All-Big Ten honorees, six first-team, under head coach Guy Gadowsky and have had at least two selections each year dating back to the 2014-15 season. 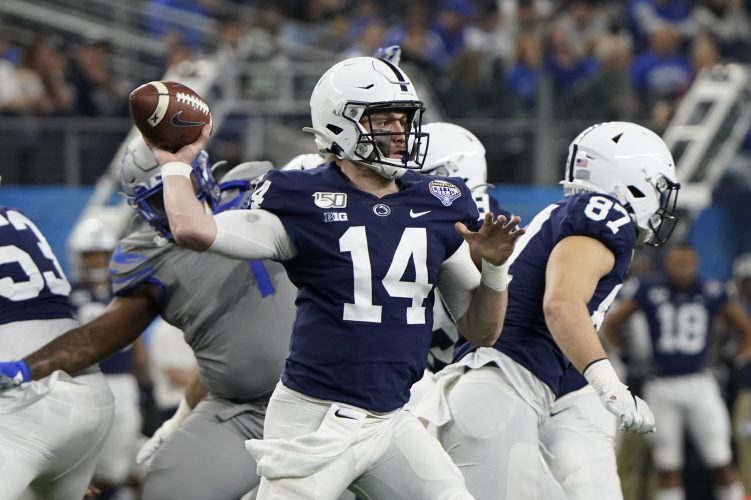