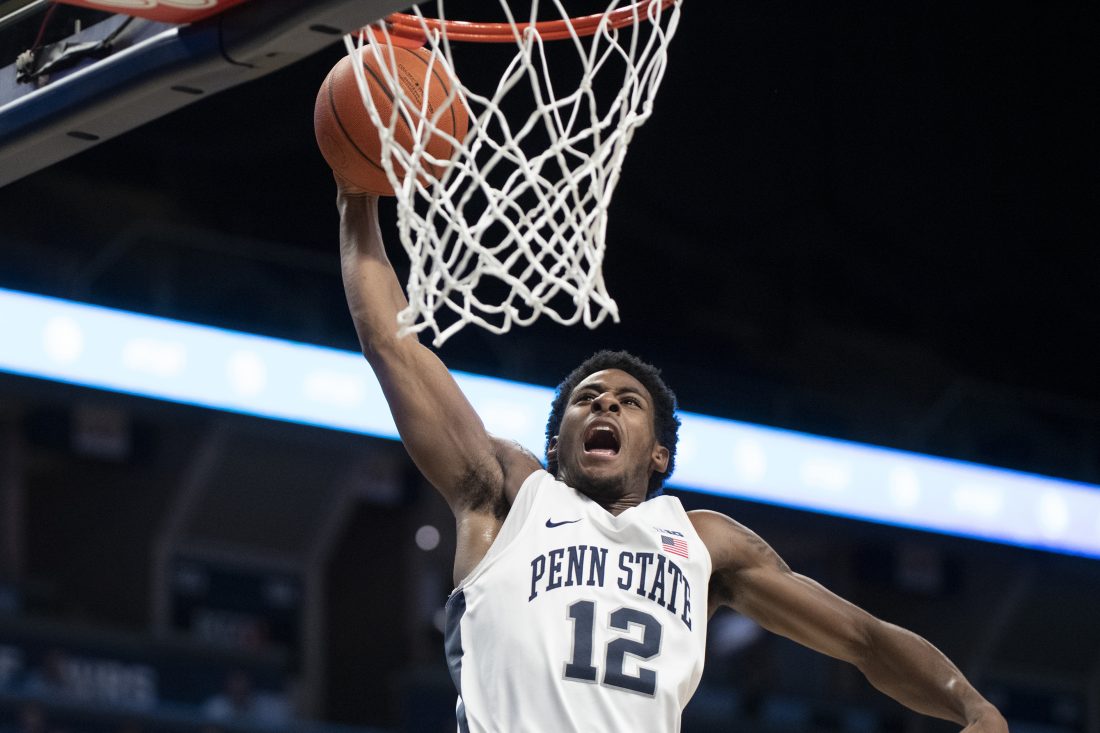 AP photo
Penn State guard Izaiah Brockington scores against Maryland during the second half of an NCAA basketball game in State College on Tuesday. Penn State defeated No. 4 Maryland 76-69.

The Penn State faithful came out in droves, as few empty seats remained in the arena after tipoff. The Nittany Lions played an almost perfect first half, led by a terrific first half by Myles Dread and a complete team effort, as the Nittany Lions held on for a 76-69 victory against the No. 4 ranked Terrapins on Tuesday night at the Bryce Jordan Center in a Big Ten men’s basketball contest.

As the final second drained off the clock, the crowd rushed onto the court, continuing to flood every inch of the floor in jubilation.

The Nittany Lions (8-2, 1-1 Big Ten) received 15 points each from Lamar Stevens and Mike Watkins, 12 points from Dread and only turned it over eight times in the victory.

“We learned from Ohio State,” Chambers said. “We learned how tough and physical we have to be in order to find success in the Big Ten and they did that. We knew we had to defend and rebound, and we did that in the first half.”

Maryland (10-1, 1-1 Big Ten) turned it over 20 times — including 13 in the first half — in the loss. The Terps hit some big shots in the first half, but the Nittany Lions kept the lead close to double digits throughout the half. Penn State took advantage of the Terps mistakes, scoring 22 points off turnovers.

“Our defense was here and there on Saturday,” Chambers said. “They committed and bought into the game plan and did a much better job. They got some really good breakouts. That was pivotal in the first half.”

Penn State began the game with a brilliantly executed lob play to Watkins following the opening tip, as Jamari Wheeler’s pass set up the easy slam to ignite the Penn State crowd right away. The Nittany Lions rode that energy and 10 points from Dread including two big 3-pointers and a three on the final possession of the half by Myreon Jones to extend the Penn State lead to 40-30 at the half.

Maryland’s top scorer Anthony Cowan Jr. was held in check for the most part, scoring just seven points in the first half –16 on the night — while a corner 3-pointer by one of the Maryland’s best bigs in Jalen Smith was all he could muster offensively in the first half. The Terps turned it over eight times in the games’ first eight minutes.

As Maryland tried to claw back into it, a 3-pointer by Stevens with 15:50 left helped keep the Nittany Lions on top with a 47-39 lead. After a steal, Izaiah Brockington had a strong run to the basket for a layup to keep Penn State ahead by 10 with 15:02 left to play.

The Terps made their best push in the next few minutes, as Darryl Morsell drove through contact and got a tough layup to go for an and-one that cut Penn State’s 10-point lead to 49-44. A 3-pointer by Jones with 12:47 left to play put Penn State back up eight. A straight-on 3-pointer by Cowan Jr cut Penn State’s lead to just 52-50 with 10:57 left.

Penn State pushed the lead back up to eight on a slam by Brockington that sent the arena in a frenzy at 58-50 with 7:51 left.

A 3-pointer at the shot-clock buzzer with 5:15 left by Brockington gave Penn State a 61-55 lead — one it wouldn’t relinquish for the rest of the night. Brockington finished with 14 points and three steals.

“What a spark he gives us off the bench with his speed and his athleticism and his toughness,” Chambers said. “His ability to guard and also get us critical baskets.”

Watkins and Stevens both had double figures in points and rebounds, while Jones, Dread, and Brockington all scored in double figures for the Nittany Lions. Maryland led for just 1:21 of game time.

The Nittany Lions have been receiving votes in the AP Poll for the past two weeks and could be a ranked team for the first time this decade.

Chambers spoke about the significance of a victory over a Top 5 team this early in the season.

“If you look at us and the way that we have played and being 8-2 and knocking off a Top 5 team, we’ve had some buzz on campus,” Chambers said. “We have some good wins — Georgetown, Syracuse, Wake Forest. I’m going to throw Bucknell and Yale in there because they’re good teams. There’s going to be energy and excitement in the program for people to come out. I think this game could help us in March. It won’t punch our ticket, but it’s definitely going to help us.”

The Penn State crowd of 8,643 was loud and active all night as the Nittany Lions showed every bit of just how good they can be this season when they play at their best. Saturday’s loss to Ohio State was the exact opposite.

“It’s all about response,” Chambers said. “Are you going to respond with toughness? You can’t let one loss lead to two. You can’t let Ohio State beat you twice. One led to two and two led to three. I think we are more mentally conditioned to draw that line in the sand and not letting this happen anymore.”

The win improved the Nittany Lions home win streak to 10 games. The Nittany Lions have also beat the No. 4 ranked team in the AP Poll three times under Chambers at the Bryce Jordan Center. Chambers’ 15 wins against ranked opponents are the most all-time for a Penn State coach.

“I want to thank all of the fans who came out tonight and the students,” Chambers said. “What a home court advantage we had tonight. There were situations where I couldn’t hear in the huddles. That’s fantastic and I really appreciate the students.”

Penn State continued to play smothering defense, something that has become a calling card in 2019. Penn State has held eight of 10 opponents under 70 points this season.

The Nittany Lions return to action on Dec. 14 for a 2 p.m. non-conference game against Alabama.

UNIVERSITY PARK — A former Penn State football player claims in a lawsuit that Nittany Lion players hazed him and ...

Transfer portal, future goals on the line for PSU

UNIVERSITY PARK —For something that’s only been in existence for 15 months, the NCAA Transfer Portal has ...