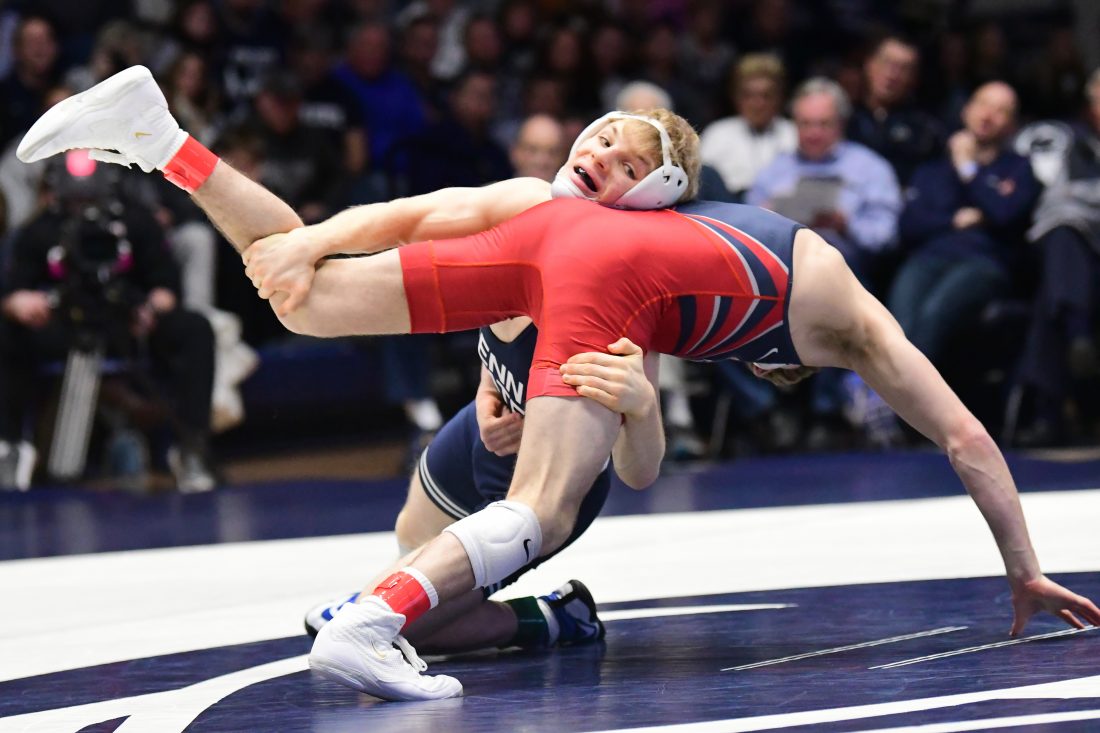 UNIVERSITY PARK — As the final seconds ticked down on Brandon Meredith’s upset win over No. 10 Michael Colaiocco on Sunday, the Rec Hall sellout crowd of 6,437 rose to its feet as one.

This would be just the first of eight wins for the No. 3 Nittany Lions in a 33-7 win over the Quakers, but the Penn State wrestling faithful are always quick to recognize great performances and reward them with their throaty applause.

Even without starters Brady Berge and Anthony Cassar in the lineup, Penn State was able to cruise to another win, fueled mainly by a 37-10 edge in takedowns.

With starting 125-pounder Brody Teske out with an injury, Meredith stepped in, as he had against Lehigh on Friday, and jump started the Nittany Lions, earning the Ridge Riley Award in the process.

“More than anything, you want to start off with somebody that’s just going to set the pace, and just kind of send a message that you’re going to wrestle hard,” head coach Cael Sanderson said.

“You always want to win, that goes without saying, but just a kid that’s going to be consistent and go wrestle hard and use all seven minutes, that’s the important thing there. We know that Meredith is more than capable of doing that. You know that was a big boost for us, I think, moving forward.”

Colaiocco scored a pair of takedowns and amassed 1:16 in riding time to lead 4-1 after a period. He escaped to start the second, but Meredith converted on a single and rode the Quaker the rest of the period to trail just 5-3 heading into the third.

In the third, Meredith escaped, scored another takedown and then dominated Colaiocco on top, eventually earning a penalty point for stalling. He earned another point for 1:39 in riding time advantage to set an 8-5 win.

“He fell behind a little early but kept his composure and just gave himself a chance. He had a really nice takedown and just kept plugging away. I think that’s a great win for him and hopefully a confidence builder for him,” Sanderson said.

Meredith said the crowd “definitely helps” but the foundation for a win like that was laid during the summer.

“Yeah, I think I put a lot of time in the summer just, you know, working and doing everything I can to get better every day. That’s the main focus I’ve been trying to take with me this year versus last year, just focus on little things and get better and things like this will happen,” he said.

“You know, B Money said that he was putting a lot of work in over the summer. I watched him do it. I saw him put the hours in, working his butt off,” Joseph said. “He looked really good out there today. I know he’s gonna go and wrestle hard so just seeing guys like that go out there and do what they do and make the progress that they make is pretty cool to watch.”

Even Mark Hall, who celebrated his 100 th collegiate win with a 19-4 technical fall in seven minutes, said he has appreciated seeing some of Penn State’s unheralded backups make the most of their opportunities.

Hall then downplayed his own milestone win.

“It was pretty cool,” he said with a smile. “I’ve got a couple more wins to get this season.”

In addition to Hall’s bonus-point win, the Nittany Lions added four others. Joseph scored his first fall of the year, using a crossface cradle to finish his match in 4:24. Aaron Brooks, in his second dual meet at 184, was dominant in piling up a 19-4 technical fall. Roman Bravo-Young collected 10 takedowns on his way to a 21-9 major decision at 133. And 141-pounder Nick Lee notched a 13-4 major decision.

Sanderson said Cassar’s absence was planned as he trains for Senior Nationals in an effort to earn a berth in the U.S. Olympic Trials. Berge, Sanderson said, was held out as a precautionary measure.

UNIVERSITY PARK — A former Penn State football player claims in a lawsuit that Nittany Lion players hazed him and ...

Transfer portal, future goals on the line for PSU

UNIVERSITY PARK —For something that’s only been in existence for 15 months, the NCAA Transfer Portal has ...