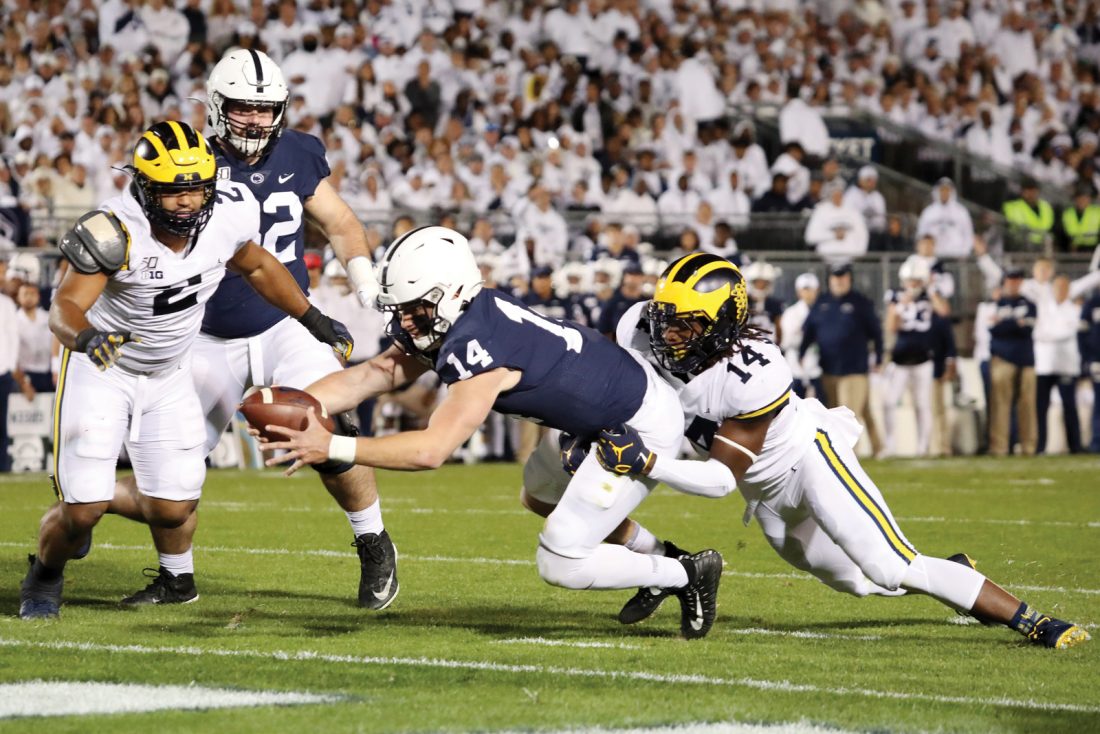 Sentinel photo by CHRISTOPHER SHANNON
Penn State’s Sean Clifford reaches across the goal line for a touchdown during during the Nittany Lions’ 28-21 victory over the Wolverines Saturday evening at University Park.

UNIVERSITY PARK — Penn State bent and bent and nearly blew what looked like an easy win.

But the Nittany Lions didn’t break.

And they got very, very lucky.

Michigan dropped a short fourth-down pass in the end zone that would have tied the game with 2:01 remaining. That allowed the No. 7 Lions to hold off the No. 16 Wolverines, 28-21, in a whiteout showdown before 110,669 fans Saturday night at Beaver Stadium.

“It was a great win,” Penn State coach James Franklin said. “We didn’t play, I would say, our best in all three phases today, but we played well enough to win the game.”

Franklin improved to 2-4 against Michigan and avenged last year’s 42-7 loss in Ann Arbor. Jim Harbaugh, meanwhile, dropped to 1-10 against top 10 teams and has lost eight of them in a row with the Wolverines.

Penn State (7-0, 4-0 Big Ten) is still undefeated and in the hunt for a Big Ten title and College Football Playoff berth. That, ultimately, is all that matters.

Those things appeared to be a foregone conclusion after PSU took a 21-0 lead midway through the second quarter Saturday. The Lions clicked on all cylinders early, getting their usually dominant defensive effort and big plays on offense that led to three quick touchdowns.

But Michigan charged back, breaking through against Penn State’s defense with good balance on offense. The Wolverines pulled within 21-14 with 1:05 left in the third quarter, and with Penn State’s offense having turned stagnant, all of a sudden, victory was becoming more in doubt.

“He’s the most electrifying player in all of college football,” Clifford said of Hamler.

“I was just trying to make a play for my team,” Hamler said. “I left it all out there.”

Michigan had another answer, though, and scored a bit of a questionable touchdown to pull back within seven. Shea Patterson barely snuck into the end zone on fourth-and-goal at the 1, with the officials not signaling TD for about 30 seconds as they cleared the pile of humanity at the goal line.

Penn State’s offense went backward on its next series as Michigan’s defense came up big to give the Wolverine offense a chance to tie it.

Michigan (5-2, 3-2) took over at the Penn State 47 with 6:54 to go and immediately got a 14-yard pass from Patterson. The Wolverines stalled and faced fourth-and-4 at the 27, but Patterson rolled to his right and found Cornelius Johnson for 6 yards and a first down.

Patterson later hit tight end Erick All for 10 yards to set up first-and-goal at the 7.

The Wolverines gained 4 yards on three runs — one by running back Zach Charbonnet and two keepers by Patterson — to set up fourth-and-goal from the 3.

Patterson stood in the pocket and tossed a pass right to receiver Ronnie Bell, who flat dropped it. The ball hit him right in the hands two yards into the middle of the end zone and he just couldn’t pull it in.

Safety Lamont Wade was right behind Bell in coverage and had his left hand near the receiver’s back, but it wasn’t a breakup. Bell just dropped it.

In an odd coincidence, Allen Robinson was wearing No. 8 when he made one of the great catches in Penn State history during the famous four-overtime win in 2013. Bell was wearing No. 8 Saturday and will always be remembered for such a big drop.

The TV cameras captured an emotional Bell on the sideline after the costly drop. That didn’t lose the game for Michigan — had it been tied, Penn State still would have had 2:01 left to try for a winning score, plus overtime usually favors the home team — but Bell’s drop crushed the Wolverines’ hopes for a big road win.

Michigan, though, did still have a chance after Bell’s drop. Penn State took over at its own 3 with 2:01 left, and the Wolverines had three timeouts. A defensive stop would have given Michigan the ball back around midfield with about 1:40 remaining.

Noah Cain, who had only three carries up to that point, came in the game and gained five yards on first down and two on second down. On third-and-3 from the 10, Clifford took the snap and handed the ball off to Hamler in motion.

Hamler cut upfield, stuck his head down and gained four yards for a game-clinching first down.

Hamler was hit in the head on the play and lay on the ground for close to a minute, but he was able to walk off on his own and spoke to the media after the game.

“Instead of just hand the ball off with them loading the box, we needed to go with one of our read plays where Sean was able to keep it or hand the ball off,” Franklin said of the run by Hamler.