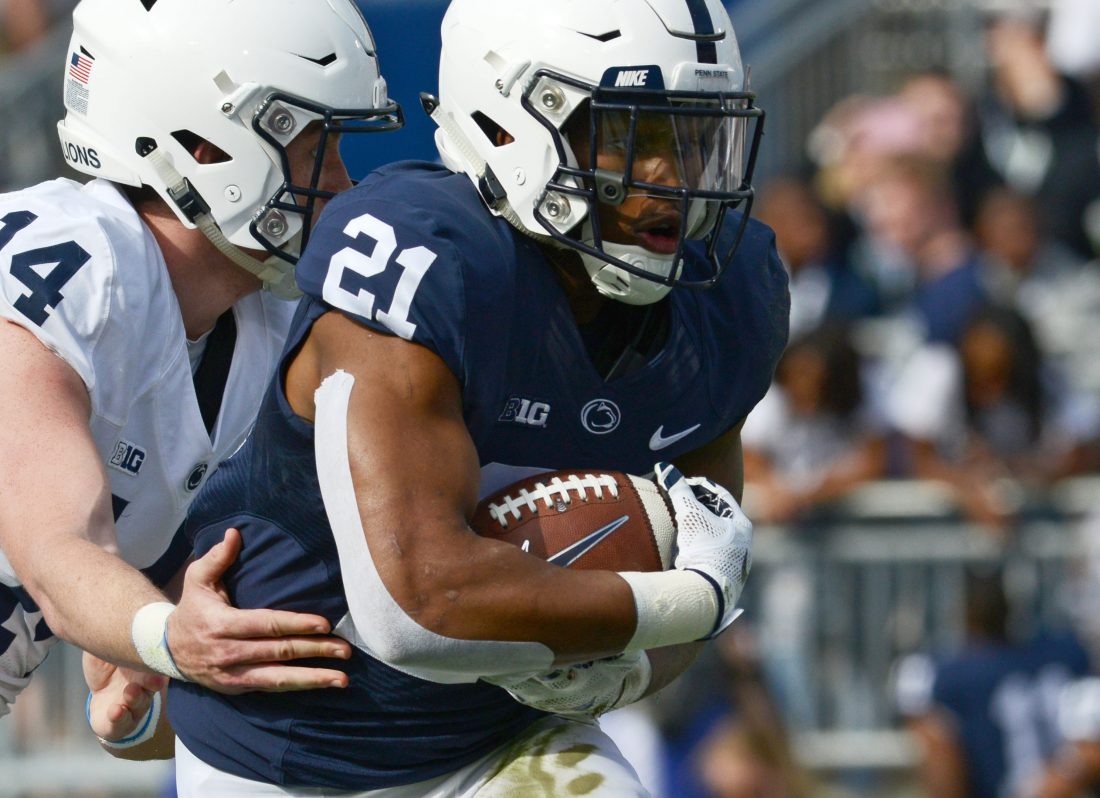 UNIVERSITY PARK — True freshman tailback Noah Cain showed he’s able to do some special things running the ball, and quarterback Sean Clifford did, as well, during the Blue-White Game.

Penn State’s spring game drew an estimated 61,000 fans to Beaver Stadium on a gorgeous Saturday afternoon, and while most probably didn’t know much about Cain prior to the scrimmage, they certainly did afterward.

Cain showed a hard-nosed running style, scoring a touchdown for each side as the Blue team (starters) defeated the White team, 24-7.

Cain won’t be the starting running back this fall — that’s a battle between Ricky Slade and Journey Brown — but the freshman certainly showed he could have a bright future.

“We knew Noah was going to be a very good player for us, and we’re excited about his spring,” offensive coordinator Ricky Rahne said.

Cain finished with 41 yards rushing and one touchdown on eight carries for the White team against the first-team defense. He also carried four times for four yards for the Blue team.

Cain had a tough run on his 2-yard touchdown against the Blue in the second quarter. Then in the game’s closing minutes, he caught a screen pass from Clifford and bulldozed his way for an 8-yard score.

“Noah’s a tough runner,” Clifford said. “He’s one of those guys who’s going to get you that extra yard if you need it. You saw it today on that touchdown, it was awesome. Now, he didn’t know exactly where he was at the start, but I put him in the right spot, and he knew exactly what to do after that.”

“He’s one of those guys who shows up in live periods,” Rahne said of Cain. “He’s a hard guy to tackle, as you saw today. Arm tackles aren’t going to bring him down; that’s not going to happen. He also has very good vision.”

Slade had a 1-yard touchdown run for the Blue, but the best highlight of the day came when Will Levis threw a 59-yard touchdown pass to wideout Dan Chisena in the third quarter. Coach James Franklin announced seconds later that Chisena, a walk-on, was being put on scholarship.

Projected starting quarterback Tommy Stevens warmed up but, as expected, did not play in the scrimmage. He’s been limited this spring after surgery in December.

That meant Clifford got most of the reps with the Blue team, and he turned in a solid day. He finished 11-of-19 (two passes were dropped) for 118 yards and one touchdown.

“We’re just a tough team,” Clifford said. “We know what we can get better at, and we talked about it in the locker room. We’re ready to take that next step … because we know the talent we have.”

Clifford answered some questions about his mobility as he got six carries for 31 yards, second-highest total on the day to Cain’s 45 yards. Stevens is known more as the running threat and Clifford as the prototypical pocket passer, but Clifford moved well in the pocket and tucked the ball and ran for a first down on a couple of occasions.

“Clifford’s probably a better athlete than people think he is, so he’s able to get out of the pocket and make some plays with his feet,” Rahne said.

Not every time Clifford ran the ball was ideal, however.

“There was a couple times I wish we would have taken the first read and things like that and gotten the ball out of our hands a little bit faster,” Rahne said. “But in general I’ve been pleased with the way Cliff has moved in the pocket all spring.”

Franklin was asked after the game if he’s ready to name Stevens as the starting quarterback, which most expect to be the case to open the season in four months.

“I’m a big believer in competition at every position,” Franklin said. “We haven’t named a starter at any position.”

But while it’s true Stevens, a senior, and Clifford, a sophomore, are competing for the job, one would have to think Franklin and the coaches know what the decision ultimately will be.

Stevens’ father, Tom, made some interesting comments this week indicating what would happen if his son is not named Penn State’s starter.

“Tommy has so much invested in this year, and we know that this is his last shot,” Tom Stevens told the Centre Daily Times. “If he’s not Penn State’s quarterback, he’s going to be somebody’s quarterback. Everyone already knows, if he’s not playing at Penn State this year, he’s probably going to leave. I don’t think that’s much news to anybody. He wants to be a starter. … If it’s not Tommy, then I think Sean would do a great job, and we would wish Penn State the best of luck.”

Clifford said after Saturday’s scrimmage that the quarterback competition is a “day-to-day process.”

“Whatever happens, happens,” Clifford said. “We’ve just got to put the best product on the field.”

There’s no question, though, that getting so many first-team reps this spring has helped Clifford build a good rapport with the receivers.

“It’s always good to get that chemistry with everybody,” Clifford said. “Honestly, I think as a quarterback it’s the biggest thing, especially with the wide receivers. Because you could have all this talent in the room, but if you’re not getting that chemistry.”

In terms of such chemistry, Stevens has been the primary backup for most of the past three years, but he wasn’t able to build as much chemistry with the young receivers last season because he was injured some and Clifford was No. 2 behind Trace McSorley.

“I think competition is important across the board at every position because that means you’re healthy at that position,” Rahne said.

“It brings out the best in everybody,” he later added. “If you don’t feel like you’re being pushed mentally, whether it’s by your coach or by the opponent that you’re playing or by the guys behind you or whatever, then you’re never going to reach your full potential.”

Barbour: No PSU players with virus