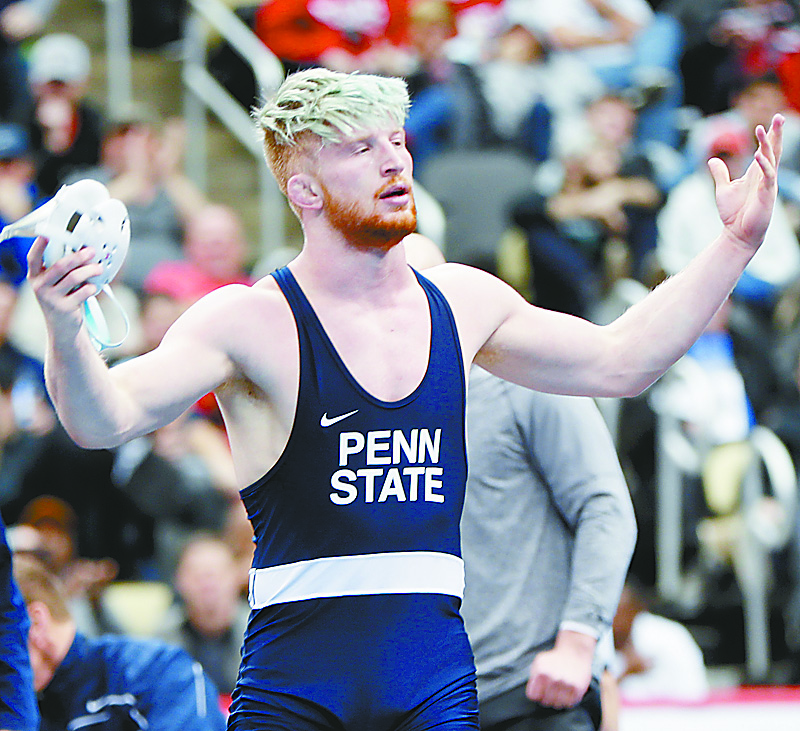 UNIVERSITY PARK — Bo Nickal has been a show-stopper for the Penn State wrestling team ever since he first stepped on the mat in a blue and white singlet on Nov. 13, 2015.

In that match he rolled up a 21-6 technical fall in front of a sold-out Rec Hall. Over the next four years, he entertained crowds all over the country while accumulating a laundry list of records and honors.

Nickal added one more award to his list Monday when it was announced that he is the recipient of the 2019 WIN Magazine/Culture House Dan Hodge Trophy. The award, presented by shoe company ASICS, is considered the Heisman Trophy for amateur wrestling and has been presented to the nation’s best wrestler since 1995.

“It’s something I’ve wanted since I was in high school and I first found out about the award,” Nickal told WIN Magazine. “I’ve tried to go out and do what the Hodge symbolizes, going for the pin and scoring as many points as I can.

“It’s a validation for my hard work. I tried to make the most out of every second on the mat,” he added.

This marks the third year in a row, and the fifth in the past eight years, that a Nittany Lion has won the award. Nickal is the fourth Nittany Lion to have the honor bestowed on him.

The other two Hodge finalists were Rutgers’ Anthony Ashnault and Cornell’s Yianni Diakomihalis.

The Hodge committee is made up of each past Hodge winner, national media, retired college coaches from each region and a representative of each national wrestling organization.

Criteria for the Hodge include a wrestler’s record, number of pins, dominance, and quality of competition. Past credentials, sportsmanship/citizenship and heart are secondary criteria used when two finalists have similar stats.

The Hodge Trophy is named after University of Oklahoma great Dan Hodge. Still the only wrestler ever to appear on the cover of Sports Illustrated, Hodge won three straight NCAA titles between 1955-1957. He was 46-0 in his three college seasons, pinned 36 opponents and was never taken down collegiately.

Nickal will be awarded the Hodge at Penn State’s wrestling banquet on April 14. He will again be presented the Hodge this fall in front of the larger Penn State athletic community at a football game in Beaver Stadium.

“We are very happy and proud of Bo winning the 2019 Hodge Trophy. He truly had an amazing college career and he will not only go down as one of the best ever, but also one of the most entertaining and dangerous wrestlers ever. Bo had such unforgettable pins in big matches throughout his career,” Penn State coach Cael Sanderson told the magazine. “Bo, along with the rest of his teammates that came in, in the same class, especially Jason Nolf, Nick Nevills, Anthony Cassar and Shakur Rasheed, led Penn State wrestling to four straight NCAA team titles and were undefeated in dual meets in their careers.”

Nickal ended the 2018-19 season with a 30-0 record; 27 of his victories produced bonus points. He had the most falls of any of the four Hodge finalists, with 18. Nolf finished with 15. Nickal earned bonus-point wins in 90 percent of his 2018-19 matches, while Nolf’s bonus-point percentage was 87 percent. Ashnault and Diakomihalis were both at 58 percent.

Nickal’s list of records and accomplishments at Penn State is long and includes:

¯ A 68-match winning streak to end his career

“The way you carry yourself is more important than the wins and losses,” Nickal said. “I don’t define myself by wins and losses. Because of that, I’m able to compete more freely. I’ve never been afraid to go for certain moves. I like to put on a show for the fans. And I’m not afraid to take risks and go for big moves.”