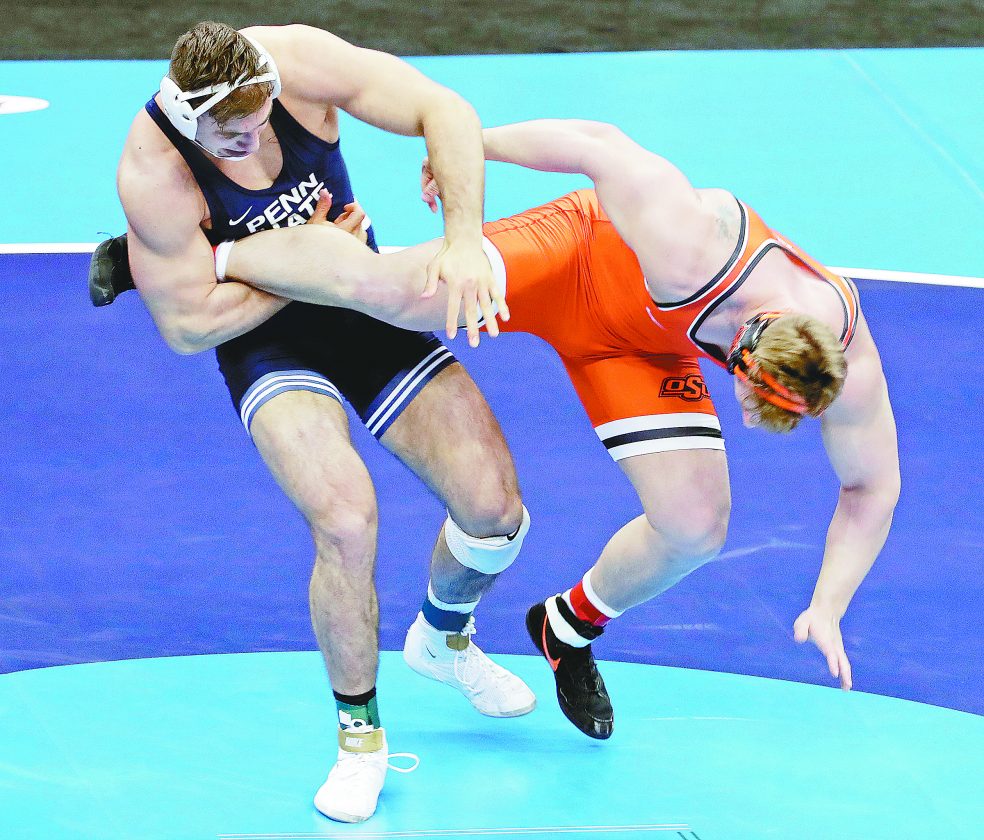 PITTSBURGH — The 18,950 fans that crammed into PPG Paints Arena on Saturday night came for a show, but instead, saw a coronation.

Penn State had already clinched the team title — its fourth straight and eighth in the last nine years — before the finals of the 2019 NCAA Division I Wrestling Championships. For the Penn State partisan crowd, the last remaining question was how many of the five Nittany Lion finalists would win championships?

Earlier Saturday, two other Nittany Lions, Roman Bravo-Young (8th at 133) and Nick Lee (5th at 141), secured their spots on the All-American podium.

Penn State’s seven All-Americans were more than any other team. Iowa had the second-most, with six. Ohio State and Oklahoma State each had five.

The Nittany Lions ended up with 137.5 points. Ohio State was second with 96.5, Oklahoma State took third with 84 and Iowa fourth with 76.

“We’re very happy and proud of this team. Some great competition individually and team-wise. And so being able to win a national championship is very special and something that we’re excited about,” Penn State coach Cael Sanderson said. “We’re also excited about the future, happy that our seniors got to go out on top. And that’s something that’s important to us. And we know we’ve had some really special guys, guys like Bo and Jason, both three-time national champs, really, really just special, special people, special kids and super happy and proud of them.”

Nolf and Nickal ended their storied careers as the third and fourth three-time champions in program history, joining Ed Ruth and Zain Retherford. The duo joined David Taylor as the only four-time finalists.

Nolf finished his career with a 117-3 record and 60 falls, the most all-time at Penn State. Nickal finished 120-3 with 59 falls. Those two are arguably the most prolific duo in the history of college wrestling.

“I think they’re both all-in. They do everything right. That pays off in big moments like this. They can relax and know that they’re ready and prepared for the moment. There’s a certain calmness that comes with being prepared. Obviously just incredible competitors. Two of the best to ever step on a college mat. I believe that 100 percent. That says it all right there,” Sanderson said.

Cassar started the finals with a dominating avenging 10-1 defeat of No. 1 seed Derek White of Oklahoma State. White had defeated Cassar, 3-2, at the Southern Scuffle in January.

“I’ve got to be smart. These are some big boys. And I don’t want to get caught under them. I learned that from my shoulder injury that I have to be smart with my finishes and my attacks,” Cassar said. “And that’s kind of carried over to my style, and so if I go, I’m going hard. And nine times out of 10 I’m going to get that attack. I’m a little patient but if I go you’re going down.”

Cassar struck with a single and collapsed White to his back for a takedown and four nearfall points in the second, added another takedown, escape and riding-time point in the third.

Nolf blitzed Nebraska’s Tyler Berger, 10-2, for the Nittany Lion’s sixth collegiate win over the Husker against no losses.

Nickal faced Ohio State’s Kollin Moore in the final and put together a workmanlike 5-1 win. He had takedowns in the first and third periods. During the last one, he clamped Moore in a near cradle as he had in pinning him in the dual, but held him there until the final buzzer sounded.

Nickal said he was excited that his match was held until last.

Hall, for the second year in a row, dropped the final to Arizona State’s Zahid Valencia, 4-3. This year was closer than the last, but it dropped Penn State’s finals mark on the night to 2-2 at that point.

Valencia tied the series between the two at 2-2. Hall beat him in the semifinals in 2017 on his way to the title and 4-0 in a Rec Hall dual meet in December.

Sanderson said clinching the team title before the finals may have contributed to the relatively conservative wrestling the Nittany Lions demonstrarted in the finals.

“I like it when they have the edge a little bit and there’s a little edge to pressure,” he said. “That just heightens the nerves a little bit and gets you focused. We all have a choice out there and the opportunity to go out and take advantage of every second we have on the mat regardless of the circumstances.”