3-pointers are difference for Boilermakers 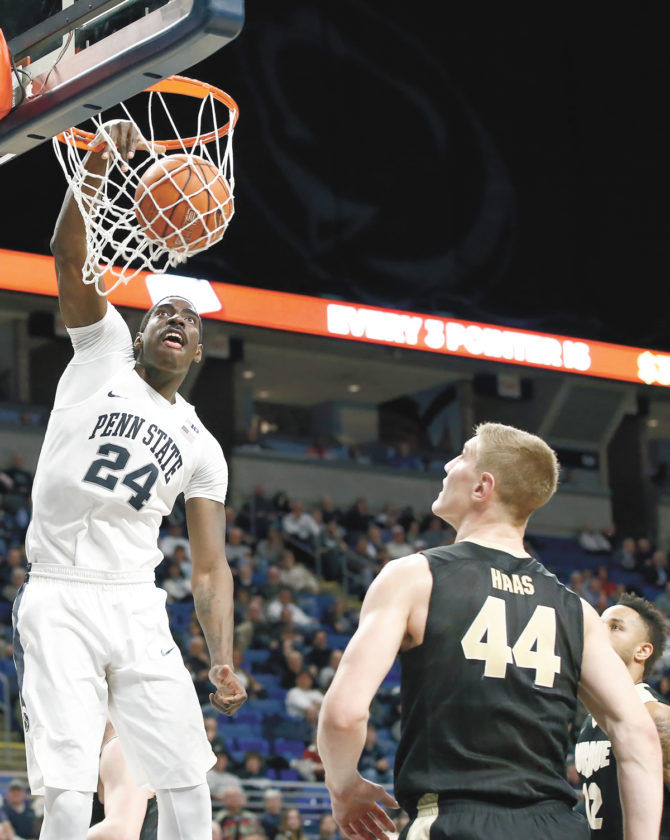 UNIVERSITY PARK — Penn State’s strong defense gave No. 14 Purdue a fight for 40 minutes and then some, but it wasn’t enough as the Nittany Lions fell to the Boilermakers, 74-70, in overtime at the Bryce Jordan Center.

The Nittany Lions had the lead for majority of Tuesday night’s contest but needed a late charge to take matters into overtime.

Tony Carr gave it to them.

Carr finished with a game-high 21 points for the Lions, scoring 12 of those in the final five minutes of regulation — and 14 of the team’s last 18 overall points. His jumper with 17 seconds left and a missed shot by Purdue guaranteed an extra five minutes of basketball.

“We competed. It’s the hardest we’ve played all year,” Penn State coach Pat Chambers said. “We were tough, we were physical, I’m proud of my team. However, there’s no moral victories here. We have to get some things done. We have to close out games.”

“It was one of those games where it rarely happens a team outplays another one and plays harder, and they lose the game,” Painter said. “The only category that we won tonight was the most important, and that’s the final score. They outrebounded us, they were quicker with the ball, played harder than we did. … We had no answer for Tony Carr there at the end.”

Penn State began carrying that momentum into the extra frame, but it wouldn’t last, thanks to Purdue’s dagger — the 3-point shot.

The Boilermakers’ Ryan Cline made back-to-back 3-point goals to give the team both the lead and some padding. A Shep Garner foul on Purdue’s P.J. Thompson that iced the game.

After Mike Watkins closed the deficit to 72-70 with a layup — giving him a double-double on the evening — Purdue’s Isaac Haas missed a jumper from the right side, and Garner, thinking the ball had hit the rim, fouled Thompson on the rebound.

Had he not fouled, the Boilermakers were faced with rushing to get a shot off with the shot clock under five seconds.

“It was an absolute bang-bang play, and I think he thought it was a missed shot and a rebound,” Chambers said. ” … We said in the huddle if they get the rebound, we’re going to have to foul. You always want to give the situation.”

Watkins finished with 11 points and a game-high 13 rebounds.

The biggest difference maker throughout the contest was Penn State’s lack of success both shooting the 3-pointer and defending it.

“We’ve got to make shots,” Chambers said. “I thought we had really nice shots, and our 3-point shooters, they had good, open looks. They didn’t go down, though.”

For much of the contest, and especially in the first half, Stevens and Watkins played exceptional defense against Purdue’s 7-foot-2 center Haas and 6-foot-9 star forward Caleb Swanigan.

Watkins kept Swanigan, a potential first-round NBA draft pick, at bay with only two first-half points. Haas had seven first half points, but the Lions did a great job of keeping a man his size out of the box and coming up with big rebounds.

That style of play gave Penn State the quick lead — going on an 8-0 run to start things — and the team would keep the bend don’t break defensive mentality going until regulation’s final 10 minutes.

Haas eventually gave the Boilermakers their first lead on a dunk. Purdue then went on a 14-6 run to set up Penn State’s 6-0 run that would tie things at 64.

Chambers and Penn State won’t be seen hanging their heads for too long.

“Purdue is a top 15 team because they find ways to win,” Chambers said. “The encouraging thing for me is that we’re not too far off. … If you go back to the first time we played them, we weren’t in the game. That shows so much growth and maturity. It shows where this program and this team is headed.”

Barbour: No PSU players with virus