Memorial Day weekend is typically my favorite time of the year to go fly fishing. The green drakes are normally showing up on my two favorite streams – Pine Creek and Penns Creek. The extra day off from the office means I have an extra night to spend on the water during the peak of the season without having to worry about being sleep deprived the next morning at my computer, since after dark is the best time to hook into a big brown.

This year may have been the best holiday weekend I have ever had fishing dry flies. I fished catch-and-release areas on Friday through Monday evenings for a few hours and caught a lot of big brown trout each time I wetted my waders.

May 24 was the first Fish for Free Day in Pennsylvania this year. I asked my wife, who had never even touched a fly rod before, if she wanted to try and catch a trout on a dry fly.

Ally said she wanted to give it a shot. She made a simple goal for herself of landing one trout. Even though I had been slamming big brownies on Pine, I knew she wasn’t ready for the type of water I usually fish on that river. It requires longer casts, figuring out tricky drifts and wading in fast, deep water. All those things are not what you want to throw at a beginner.

Instead, I knew of another creek with a catch-and-release section where the water was a lot smaller and could easily be waded. I had fished it earlier that weekend had caught a of trout.

She borrowed a pair of hip boots and we were on our way. There were four people fishing within sight of the parking lot I selected, so we walked through the woods until coming to a small corner hole I usually had success fishing.

We went over a few basic things before she made her first cast with a sulphur on the end of her line. Some trout were raising and I was confident that she would at least be able to get a few hits. However, I wasn’t positive she could hook a trout on her first outing.

When a trout would take a bug off the surface, I would show her how to get into position so that she was parallel to the fish. Next she would cast up stream in front of the ripples left on the water.

While her technique wasn’t exactly a thing of beauty, she was able to put the fly where it needed to go. It took some time for her to understand how to get the drift right so there was no drag from her line and the fly appeared to float down the stream like the real thing.

One trout eventually popped at the surface very close to where we were standing. She made a good cast and the fly was heading where it needed to go. Before I knew it, a fish gulped it up and she set the hook.

Needless to say, I was pretty impressed when I realized she had actually hooked it. The small trout went down stream as she excitedly yelled “What do I do now?” Fly reels are not like a spinning version where you can just reel and rely on the drag.

Ally did well and had the fish in front of her rather quickly.

I pulled out my net and prepared to land the fish. But before I did that, I tried to show her to use her off hand as a makeshift drag if the fish ran. In doing so, the brownie popped off and swam away.

“That was my fault,” I said. “You caught that fish. I could have easily netted it, but wanted to teach you how to use your reel in case you hook a bigger one.”

She wanted no part of calling that a catch.

Back to casting she went as a few more trout were feeding on the sulphurs on the water. After a few minutes she hooked another one. This time I did my best to get the fish in my net as quickly as possible.

A big smile appeared on both of our faces as the brownie splashed around in my net. Many anglers spend a lot of time on the water and struggle to catch a trout with a dry fly. She had been able to accomplish this feat within 30 minutes of the first time she ever touched a fly rod.

After a photo, she released the trout back into the water. I told her we had plenty of time that evening to try and catch a few more if she wanted to stay. And just as everyone else who has ever enjoyed the satisfaction of catching a trout on a dry fly has done, she could not wait to do it again.

Over the next half hour she hooked three more trout. One made it to the net, while the other two were able to pop the hook from their mouths during the battle. There were also a couple misses as she set the hook too late.

It was a very memorable night on the stream for us. I think she genuinely felt a sense of pride and accomplishment. There was no doubt I was very proud of the way she listened and used the advice I gave her to catch her first trout fly fishing.

Zach Knepp writes about the outdoors for The Sentinel. 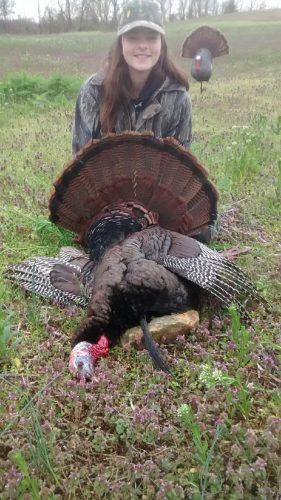