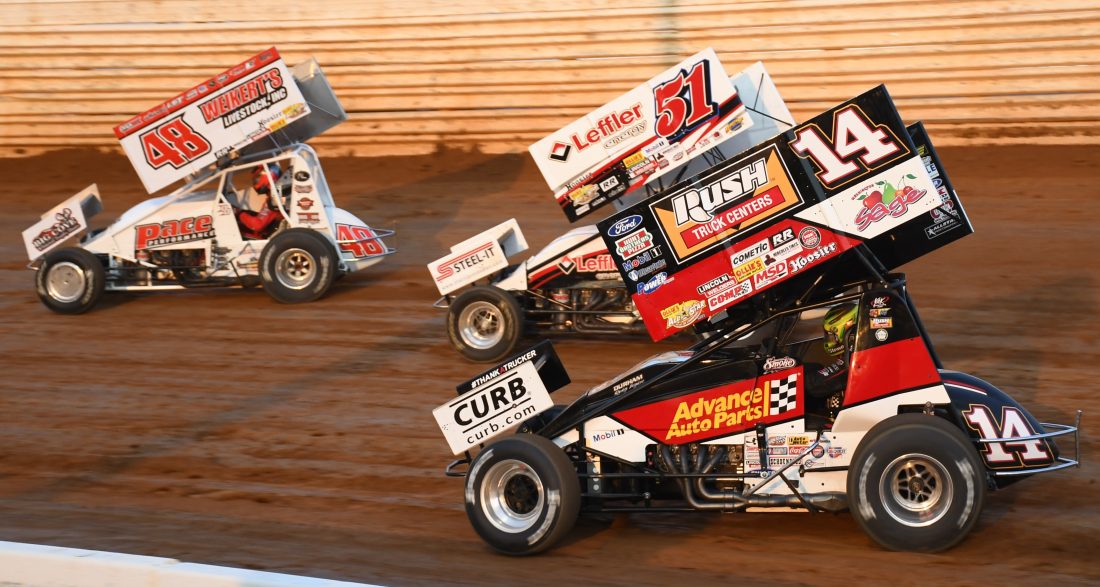 Editor’s note: Due to an early press time for this edition, coverage of Friday night’s race at Williams Grove Speedway will appear in Monday’s edition.

In last year’s inaugural Greg Hodnett Classic, it was Lucas Wolfe scoring the win and securing his fourth Speedweek championship.

The 30th Anniversary of the series has been a huge success with large car counts and great crowds at the first eight events. It appears all nine races will be completed. The weather has been very good for Speedweek in recent years with only two races lost to rain over the past four years during Speedweek.

Kyle Larson, of Elk Grove, Calif., has two wins and two runner-up finishes during Speedweek and held a comfortable point lead (110) heading into Friday night action at Williams Grove Speedway. Larson’s other Speedweek finishes are a third, fourth, and a sixth.

This is the first time Larson has competed in all of Speedweek. He now owns six career Speedweek victories as he did run some races previously around his other racing commitments.

Since losing his NASCAR ride with Chip Ganassi Racing after using a racial slur while iRacing on live television, Larson has returned to his roots racing sprint cars and midgets on the dirt. Since early June, he has four wins against the All Star Circuit of Champions, three against the World of Outlaws and two during Speedweek. He was the Indiana Midget Week champion winning four of those races.

Larson had a streak of 17 straight podium finishes (16 top two finishes) that ended with a sixth place finish Monday at Lincoln.

He won $10,000 at Grandview Speedway Tuesday night, and crushed the field leading all 30 laps at Hagerstown Speedway Thursday night earning $5,000. It was Larson’s first win on a half-mile track in the region.

“The race fans in Pennsylvania are some of the best,” Larson said following his Hagerstown win. “I get the honor of racing all around the world and when we come to central Pennsylvania, I like it because the fans; it’s kind of an old school feel, they have their rivalries they build -the PA Posse versus everybody else. It’s fun to come in here, run up front and win a couple of them.”

The Speedweek champion earns $5,000 thanks to Red Robin and the Lehigh Valley Restaurant Group. Second earns $3,000 and third earns $2,000.

The most points a driver can earn in one night is 185.

Macri, Wolfe, Dewease and Dietrich are the most recent Port Royal Speedweek winners. The super late models join the Speedweek sprint cars tonight. Gates open at 4 with warm-ups projected to start at 7. Anthony Macri, of Dillsburg, has four straight wins in the 410 Sprint cars and another 360 Sprint car win giving him five straight at the track.

Speedweek was underway Friday night at Williams Grove Speedway, but not complete at press time for the early edition of the Lewistown Sentinel. The winner of the Grove’s Mitch Smith Memorial earned $15,000. Lance Dewease won the Speedweek opener at the Grove last week and his next Speedweek win will tie him with Fred Rahmer for most Speedweek wins all-time at 30 and his next Grove win will be number 100 at the Cumberland Co. track.

Dewease was off to a good start Friday night as he set quick time over the 38-car field with a lap of 17.330. Macri had the second-best time at 17.388. Larson had the third-best time of 17.392. Rico Abreu, Lucas Wolfe, Kyle Reinhardt, Sammy Swindell, TJ Stutts, Chad Trout and Brian Montieth were top the 10 qualifiers.

Dietrich was one of the last cars to qualify and the track had sloweddown considerably. Dietrich’s time was only 26th quick and he lost 23 more points to Larson as drivers earn Speedweek points every time they’re on the track including time trials, heat races and of course the main event.