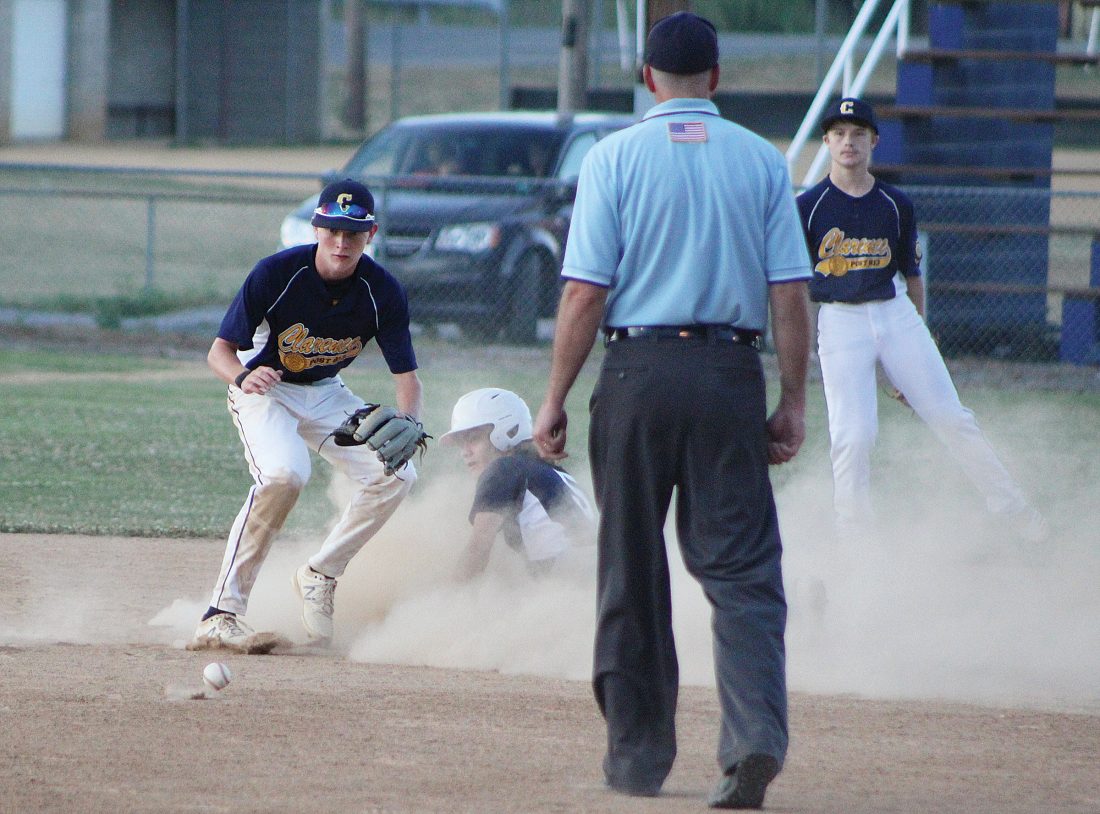 Sentinel photo by WILLIAM WHISLER
Mifflin County’s Drake Schaeffer slides into second base ahead of a throw from Clarence catcher Kyler Cunningham on Tuesday night in Milroy. Mifflin County scored seven runs in the second inning and withstood a late rally by Clarence to win 7-5 on Tuesday night.

MILROY — Mifflin County’s offensive firepower was once again on full display, as Mifflin County batted around in the second inning, creating an insurmountable lead as seven runs scored in the frame in Mifflin County’s 7-5 win over Clarence in an Independent League baseball contest on Tuesday night in Milroy.

Dobson cruised through four shutout innings on the mound, giving up just three hits and striking out five Clarence hitters.

His curveball along with the pop of his fastball kept hitters off-balance in the first half of the ball game.

“Bryce has settled in there very nicely,” Mifflin County coach John McGonigle said. “When you have him on the mound his command is great, he’s out there being a competitor and battling with every pitch. He mixes things up well and he lets the defense work behind him. Hitting wise, he’s the leading RBI guy on the team right now. He’s out there competing every night, putting balls in play and hitting the ball hard. He just picks up where he left off, one game after another.”

Bodtorf drove in the first run of the night with a sharp single into right field that scored Cole Schlegel, giving the home team an early advantage. Mifflin County made the most of the opportunity, as Dobson drove a two-run single into right field, scoring Isaiah Alters and Bodtorf, before Eichhorn drove in a run after he reached on a dropped third strike.

Bailey made Clarence pay for the mistake, as his two-run double scored courtesy runner Drake Schaeffer and Eichhorn to give Mifflin County a 6-0 advantage. Mifflin County added a seventh run on a single to left by Smith.

“I felt like we hit the ball hard all night,” McGonigle said. “We were able to put up runs there in the second inning which was a big seven-run inning for us. I was happy with the at-bats that we had for a majority of the night. We hit some balls hard right at guys. It was a good turnaround from Sunday.”

Mifflin County turned to its bench with a 7-0 lead in the fifth inning, as seven different players entered the game for Mifflin County. The defense behind reliever Cole Knable was shaky at times, but Knable pitched well to get out of a couple tough spots, including a base-loaded jam in the seventh inning after a three-run single by Clarence’s Alex Gavlock made it 7-5, Mifflin County with two outs.

McGonigle was happy with the offensive effort the team put together, but said that the team needs to play better defensively down the stretch. Mifflin County finished with three errors.

“We have to clean things up obviously,” McGonigle said. “I try to get guys in when I can and tonight was a night to do that. Up seven runs I liked where we were at and I liked giving the guys a chance there in the last three innings. These starters gladly give up their spots and they are all about the team. We have to clean up defensively the things that happened in the second half of that game.”

Mifflin County has been at or near the top of the Independent League all season and despite two losses within the past week, Mifflin County continues to find ways to win. Multiple players have stepped up in different situations, whether its the pitching rotation or the production of someone in the lineup.

Bodtorf, Dobson, Pupo and Eichhorn have been huge contributors in the Top 4 spots in the Mifflin County lineup, while Alters has done a great job of setting the table in front of the team’s big bats as a second lead-off bat in the ninth spot. Alters has four hits in his last two games and the speedy infielder has provided multiple runs for the team.

Mifflin County will host Juniata Valley at 6 p.m. on Thursday.

“We have been a little shaky in the middle here, but it’s a long 15 games,” McGonigle said. “It’s a short season, and it’s quick, and everything is on top of each other. We’re going to go out there and battle and play it one game at a time. The next important game is Thursday and that’s all that matters right now.”