Sentinel photo by WILLIAM WHISLER
Mifflin County’s Ethan Eichhorn, right, is mobbed by teammates at home plate after hitting a three-run home run in the fifth inning against Tyrone.

Sentinel photo by WILLIAM WHISLER
Eichhorn celebrates with coach John McGonigle as he rounds third base in an Independent League baseball contest on Tuesday. 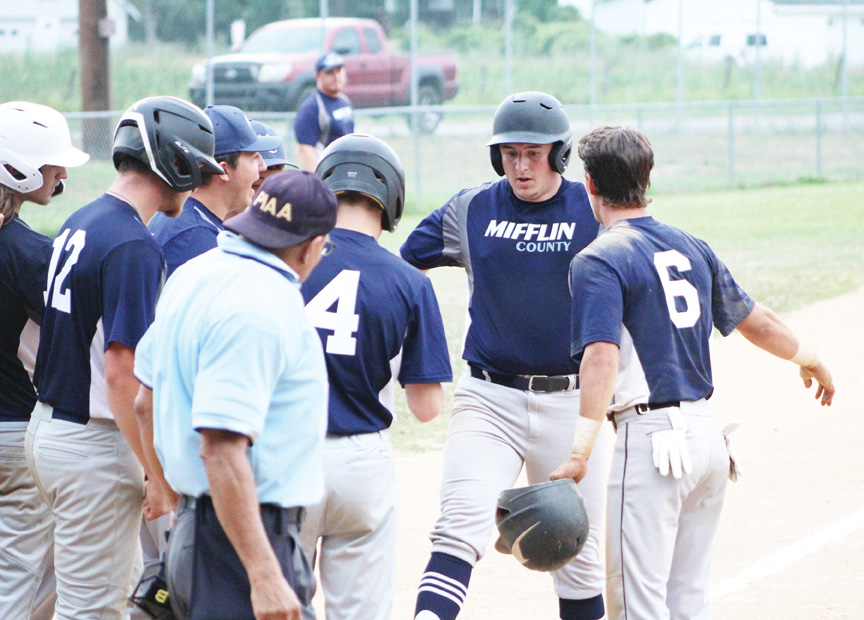 Sentinel photo by WILLIAM WHISLER
Mifflin County’s Ethan Eichhorn, right, is mobbed by teammates at home plate after hitting a three-run home run in the fifth inning against Tyrone.

MILROY — In a game full of ups and downs, Mifflin County had its chance late. Down to its final three outs, Mifflin County pushed two runs across but stranded the tying run at second base to end the game, falling to Tyrone, 8-7, in an Independent League baseball contest on Tuesday night in Milroy.

The loss was Mifflin County’s first of the season.

Mifflin County (7-1) began a rally, trailing 8-5, when Brando Souders led off the seventh with a walk. Colby Bodtorf had an impressive at-bat, fouling off multiple pitches to work the count and reached on a second walk by Tyrone’s Rodney Shultz.

With one out in the inning, Jaxson Pupo delivered a clutch two-run single to left field, scoring Souders and Bodtorf. Shultz regrouped on the mound to get the final two outs, closing the door on Mifflin County’s comeback attempt.

“We definitely battled all night long,” McGonigle said. “We got up on them in the first inning, putting up two runs, but we kind of went stale there for a while. They got up and we were battling back from there, but never could retake that lead. Down three in the last inning, these guys didn’t go away and they put the bat on the ball and had some guys on base, but we just couldn’t get that last run across.” 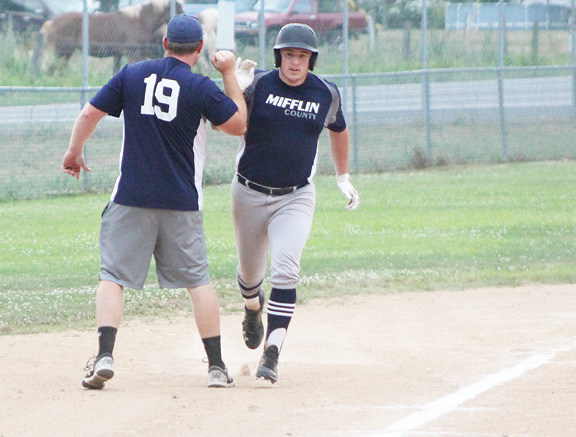 Sentinel photo by WILLIAM WHISLER
Eichhorn celebrates with coach John McGonigle as he rounds third base in an Independent League baseball contest on Tuesday.

Mifflin County scored twice in the first inning after Bryce Dobson delivered an RBI double to score Bodtorf who reached on a double. Mifflin County added a second run on an RBI single to center by Rylan Bailey, which plated Dobson.

Tyrone (7-1) answered in the third and fourth innings, as Tyrone added two on a two-run bomb to left-center by Kevin Lehner, before scratching across three more in the fourth on RBI singles by Zack Lagars, David Lang and Blaine Hoover. Tyrone led 5-2 after four.

Mifflin County’s offense came back to life in the fifth, as Ethan Eichhorn delivered a clutch three-run blast to left-center to tie the game up at five.

“It was definitely a roller coaster,” McGonigle said. “Getting up early, the emotions were high in the first inning and things kind of leveled out and went from there. We got down and tried to keep things moving and staying motivated can be difficult. We’re trying to work on ways to do that. We feel that if we are able to stay motivated that we are going to be able to do a lot with it.”

Tyrone battled back in the sixth, scratching across three runs on a three-run triple by Brandon Lucas to push the lead back to 8-5. Lucas roped a screaming line drive to right field that got away from the right fielder for extra bases and proved to be the difference as the Mifflin County rally fell flat in the seventh.

Eichhorn took the loss on the mound for Mifflin County, going 2.1 innings, giving up three runs on two hits, with five walks and two strikeouts. Lucas earned the win for Tyrone while Shultz picked up a save.

Bodtorf had a stand-out night for Mifflin County, going 2-for-3 with two doubles, including one in the fifth inning that caught the chalk line in left field. Bodtorf later scored on the Eichhorn homer. He scored three runs at the top of the Mifflin County lineup and pitched a scoreless seventh.

“Colby does a great job every night,” McGonigle said. “He battles and you know what you’re going to get every night out of him. He puts his nose to the ground and will do anything for anyone on this team. He’s your all-around team player, no doubt about it. He did a great job today at the top of the lineup, scoring three runs. He puts the ball in play and makes the defense work.”

For fans who love National League rules, Tuesday night’s contest featured two home runs and a triple from players batting as a pitcher in the lineup.

McGonigle hopes that Mifflin County will continue to produce offensively at the same level and will respond well from the difficult finish.

Mifflin County has scored 64 runs in eight contests and the team has a .314 batting average and an on-base percentage of .428.

“It’s going to be a learning experience. I told these guys that we never quit and we never backed down from [Tyrone]. They are a good ball team and they hit the ball well. Kevin Lehner] hit the big home run for them and a couple things here and there, it would have been a different ball game. There are things that we can work on, but I am pleased with the effort.”