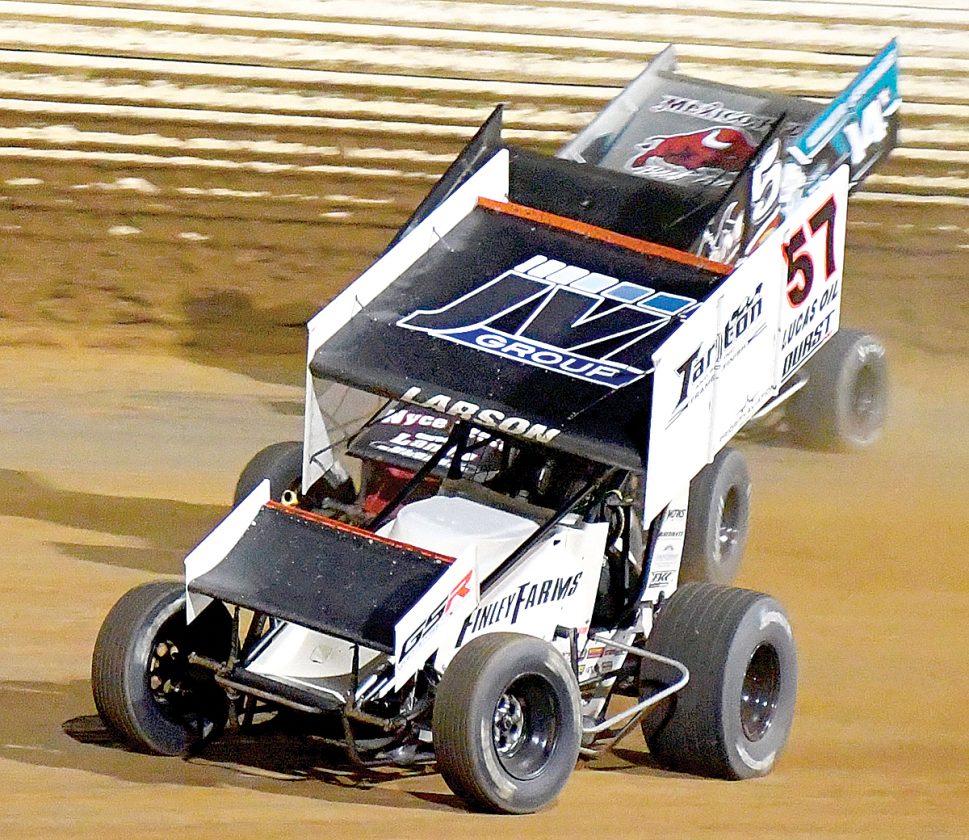 After trading sliders with Brent Marks early in the 30-lap main event, Larson secured the lead and drove off to his first career Port Royal win earning $10,027.

The Elk Grove, Calif., driver won four of nine Speedweek races, had two runner-up finishes, a third, fourth and worst finish of sixth. He earned a total of $57,600 during the week including $5,000 for the championship.

“This place has turned into my favorite race track,” Larson said. “Everything they’ve done to revamp this place and make it so much cooler; probably one of the nicest dirt tracks in the world right now. It builds up the atmosphere for us drivers and seeing the crowd in the stands, too. Just really cool to win at Williams Grove, a place I wanted to win really badly last night, and then to back it up with what we did tonight is really cool as well.”

The Paul Silva 57 is fast whenever and wherever they race.

“What an amazing race car Paul Silva’s prepared,” Larson said. “I had so much grip by myself on the restarts. I could run off the cushion a little bit and keep good throttle, amazing racecar. It was a long week. Cool to win the championship and also cool to end it with a win.”

“It’s tough; it’s grueling; anytime you run any sort of Speedweek,” he said. “When you come to Pennsylvania on these guys home turf it makes it that much tougher. There’s no other race tracks like any of these tracks we go to throughout the country. The locals have a lot of laps around these places and got their stuff figured out. I haven’t always been good in Pennsylvania, but since Paul and I have come through we’ve done a good job and it just shows how smart he is and for us to not really race a whole lot up until this year for us to be as competitive and as dominant as we are right now makes my job a lot of fun. I’m just happy to be doing what I’m doing driving racecars and look forward to the rest of the year.”

Logan Wagner started on the pole and grabbed the lead. Brent Marks shot under him entering turn one. Wagner stayed on the top and in the gas squeezing between Marks and the fence to lead off turn two.

Larson passed Rico Abreu entering turn one for third. The red flag stopped the race for a second-turn flip by Kyle Moody. Jason Shultz also was involved. They were okay.

Wagner led Marks, Larson, Abreu and Anthony Macri for the restart with one lap down.

Marks went after Wagner on the restart. Wagner turned back under Marks’ slider maintaining the top spot off turn two.

The fast groove was right up against the fence with a good cushion. Wagner started lapping slower cars with a 1.7-second lead over Larson with six laps completed.

Larson quickly cut into that lead and made the winning pass with a first turn slider with 10 laps completed. Wagner started to fade as both Marks and Abreu got by.

As they raced through traffic, Marks stayed right with Larson.

The leader had a close call in turn one with a lapped car allowing Marks to pounce. He took the lead as they raced into three. They were side-by-side down the frontstretch with Marks leading by a scant .024 seconds.

Larson put a slider on Marks once again and made it work securing the lead off turn two and down the back stretch.

Larson slowly increased his lead through traffic with Marks and Abreu following.

Danny Dietrich came into the night second in Speedweek points. He had to change engines after his heat race and then won the B-main. He slowed and tried to make it off the track in turn one, but couldn’t get completely off bringing out the yellow with five to go. Larson’s lead was more than one second at this point.

Larson got a good restart negating any slider by Marks, who actually had to fend off Abreu for second.

Anthony Marci, who won the last four races for the 410s at Port, slowed and got off the track in turn one, but officials threw the yellow with two laps left.

Larson had another great restart and Marks had to fend off Abreu once again for second. Larson’s final margin of victory over Marks was 1.556 seconds.

“I couldn’t get it done tonight, but we’ve had a really fast race car all week long, and we only finished outside the top 10 once,” Marks said. “It takes a lot of effort to run this track when it’s like this and it’s a lot of fun. You get runs on guys and slide them and go all over the place. I really like it when it’s like this. I tried to get the lead from Logan and it cost me a spot to Kyle. I don’t think I would have done anything different. Those guys are hard to beat.”

Kyle Larson’s point total was one of the highest in Speedweek history. The top 10 in points were:

Fred Rahmer remains on top the Speedweek win list with 30. Dewease has 29 now. Greg Hodnett has 26. Stevie Smith and Danny Dietrich have 11. Donnie Kreitz, Keith Kauffman and Larson are next with 8. A total of 214 Speedweek races have been held with 46 different winners at 12 different tracks. Macri was the only new winner in the 2020 series.

Some critics see sexism in debate over Biden VP