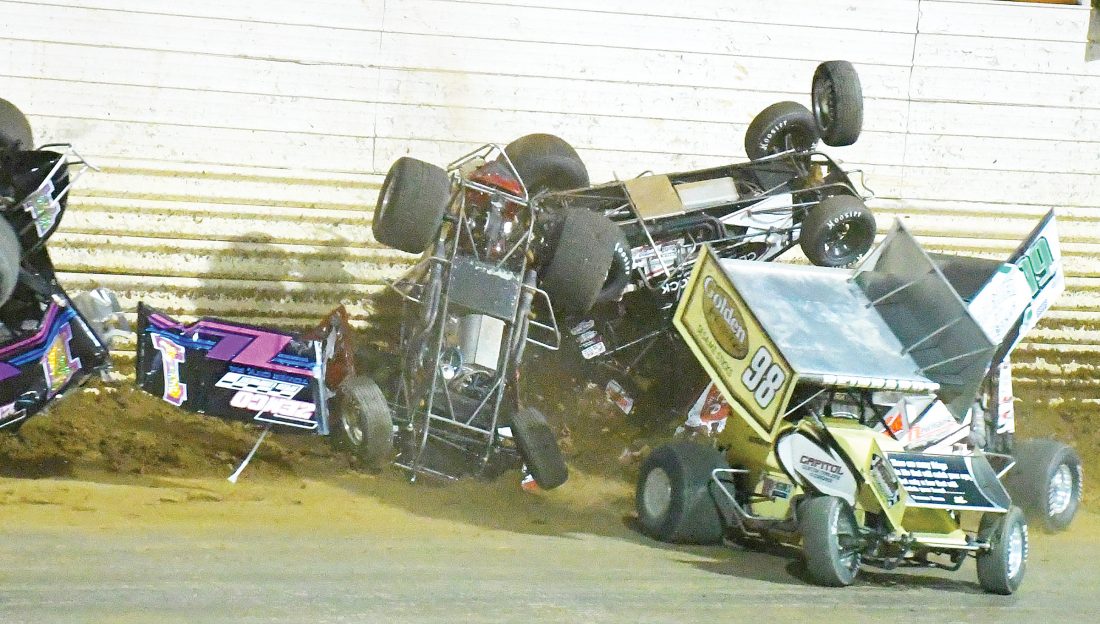 Sentinel photo by MIKE GOSS
A wreck on the first lap of Saturday night’s 410 sprint car feature collects No. 1 Logan Wagner, No. 24 Lucas Wolfe, No. 98 Kyle Reinhardt, No. 1J Kevin Knouse and No. 19M Landon Myers at Port Royal Speedway. All drivers were OK after the accident.

The pair traded the top spot multiple times over the final laps. Halligan squeezed between Cisney and the turn two fence to keep the lead, and twice turned back under Cisney’s slider to stay out front.

Halligan, of Ephrata, raced the bottom lane in turns three and four, but wasn’t getting as much drive off. Cisney got a great run on the final lap as they raced side-by-side to the checkers with Halligan nipping Cisney by a scant .061 seconds. He earned $4,000.

“I was pressing my luck, especially the one time I snuck in by him,” Halligan said. “I knew I was pressing my luck. He could have easily closed the door on me and screwed me up big time. I knew if he was going to keep doing it, eventually he wasn’t going to leave that little hole open, so I started cutting down. The first 19 laps, we were getting such great drive off the corners especially four, but after that, I was really struggling. It’s awesome that we won. We did a lot to the car this week and our hard work paid off.”

“I didn’t think there was room for a car, but he kept sticking it in there,” Cisney said. “I tried to drive in there a little deeper and a little faster and clear him and it took me a couple times to do it. It was good, hard, clean racing. That was a lot of fun sliding back and forth with each other.”

A five-car crash in the first turn marred the start of the Sprint car main event. Kevin Nouse and Logan Wagner made contact as they raced into the corner and started flipping. They slid across the track collecting Lucas Wolfe at the top of turn one with all three cars crashing hard. Kyle Reinhardt and Landon Myers had nowhere to go and got tangled up as well. All drivers were reported OK. Reinhardt and Myers made repairs and returned.

Halligan took the lead from Buckwalter with an inside pass of turn four on lap 10. He pulled away. He began lapping slower cars as Cisney and Marks tried to settle in the third spot. Buckwalter slowed with six to go bringing out the yellow.

Cisney took second from Marks on the restart. The next time into one, Cisney tried a slider, but Halligan stayed on the cushion and never lifted. They were closer yet the next time around.

With a few to go, Cisney cleared the slider, but Halligan turned his car back under Cisney’s maintaining the lead off two. The final lap Cisney got a great run, but Halligan found just enough speed off the bottom of four to nip him at the line.

Heat races for the 30 cars in the 410 Sprint pits were won by Flick, Halligan, Cisney and Marks. Anthony Fiore won the B-main, but his car wouldn’t fire for the A-main.

The speedway hosts the rescheduled Bob Weikert Memorial this Saturday and Sunday with Sprint car features both paying $10,000 to win.

Bryan Bernheisel led the opening lap of the 30-lap main event for the River Valley Builders super late models. Gregg Satterlee used an inside pass in turn two taking over the top spot.

The yellow flew with 13 laps completed as Lee had cut into Satterlee’s advantage.

Sattlerlee controlled the restart and pulled away continuing to dominate the main event.

A yellow with five to go put Lee back on Satterlee’s bumper erasing a 3.7-second lead. Ross Robinson passed Lee on the restart, but had nothing for Satterlee as he scored his third Port Royal win of the season by 1.5 seconds.

Tim Wilson set quick time over the 32-car field with a lap of 19.811 seconds. The heat races were won by Flinner, Satterlee, Robinson and Bernheisel. Jason Miller won the B-main.

Heat races for the 28 limited late models were won by Shoemaker, Yoder and Hart. Drew Weisser won the B-main.