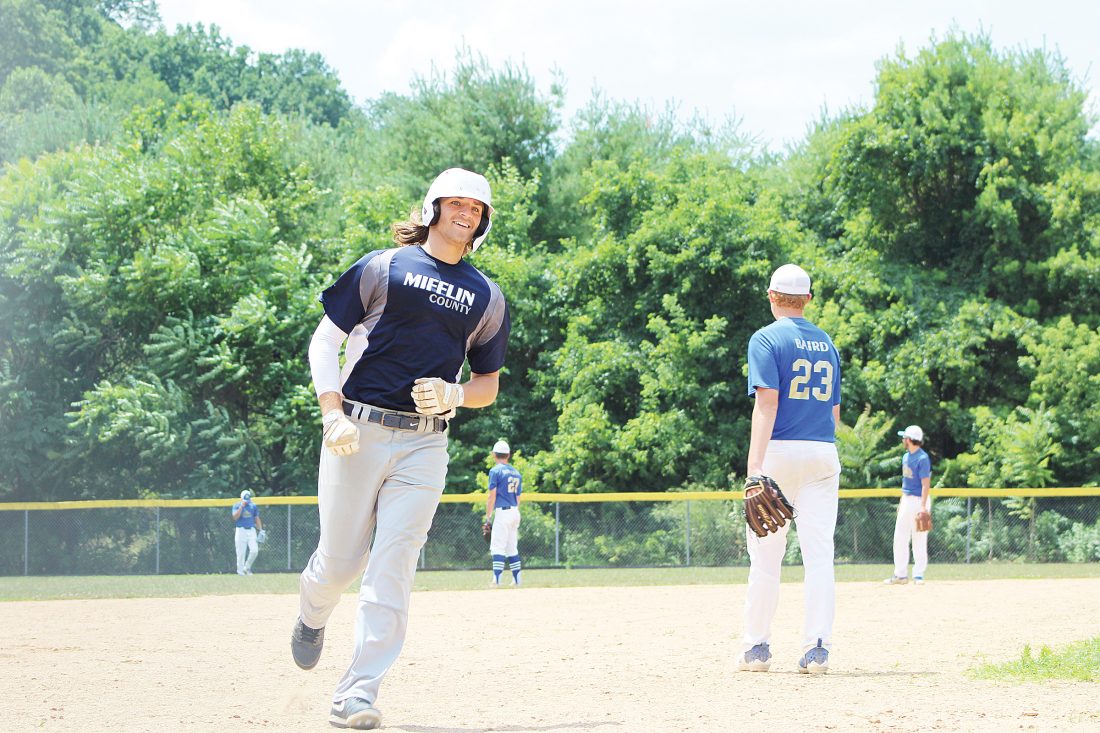 MOUNT UNION — It didn’t take long for the Mifflin County bats to get rolling on Sunday and when they did, it was a beautiful sight to behold.

Mifflin County (14-3) executed the hit-and-run to perfection and used four long balls to push past Mount Union, 12-11, in a Central Penn Division Semifinal game that was a rematch of Thursday night’s regular season finale. The win for Mifflin County ties the season series, 2-2.

Evan Smith, Rylan Bailey, Jaxson Pupo and Cole Schlegel all homered for Mifflin County. Smith’s three-run shot in the first added on to Mifflin County’s early lead while Pupo, Bailey and Schlegel’s home runs in the sixth gave Mifflin County the cushion it needed for the victory.

The win puts Mifflin County one win away from a spot in the Independent League Regional Aug. 7-9 in Hollidaysburg.

“You saw a lot of good approaches out there today,” Mifflin County coach John McGonigle said. “The guys came to play today and they hit the ball well all day long. They were patient, hit what was given to them, and they hit the mistakes. That’s the key.”

Mifflin County had an 8-1 lead through two innings, as Smith’s three-run blast, RBI singles by Bailey, Pupo and Bryce Dobson, along with another single by Bailey that scored two more, provided the early offense.

“The confidence in the bats is through the roof,” McGonigle said. “They believe in themselves and they know they can hit, we know they can hit, and we have a really solid ball team here when everything is put together and we play to our potential.”

Pupo started things off with a shot to right field that was a no-doubter off the bat. Bailey’s home run was just as impressive, towering to center field to make it 10-3, Mifflin County.

“We definitely had something going,” Bailey said. “We started hitting the ball well and the ball was carrying well. We started putting runs together and we need to keep doing that.”

Schlegel broke out of his slow start in the ball game with a blast of his own to left that brought in two runs to push the lead to 12-3 through the top half of the sixth.

“Going into the at-bat I was 0-for-3, so I knew I just needed to put the bat on the ball,” Schlegel said. “I knew [Evan] Smith was on first base and we needed a few more runs. You can never have enough runs and that’s what I was thinking. We came into this game really hungry.”

Mount Union (13-4) had an impressive comeback attempt in the final two innings, scoring eight times, with most of the damage coming on a three-run shot by Grayson McClain and a solo-homer by Zach Baird. Mount Union batted around in the final inning, but Baird flew out to left to end the game. Vince Lear added a three-run double in the sixth but was thrown out trying to stretch it into a triple to end the sixth.

“I told them that this is the last one before regionals, because we are going to forfeit out [of the Central Penn Division Tournament],” Mount Union coach Marty Walter said. “We aren’t playing anymore until then. This is the last one, have fun. Grayson came through. He just came back from the beach and he wanted to hit. I’m proud of them.”

Bailey came on in relief to put out the fire in the seventh, getting a flyball to end the rally with the bases loaded.

“The last inning was definitely scary, but I knew we could get it done,” Bailey said. “We got out of it with the flyball to left field to end it.”

Walter said that Mount Union used the game as a tune up, since the team had already earned a spot in Hollidaysburg by winning the regular season title.

“We were just having a practice day today basically,” Walter said. “These guys didn’t really want to play, but I told them to just show up and that it was better practice than what we could have with anybody. I respect all of the kids on [Mifflin County’s] team, so I really didn’t care what happened. We showed up and these young kids came through. They played well and we had fun. No tension, it was a nice game. We had fun.”

Mifflin County now awaits the winner of the Loser’s Bracket matchup between Mount Union and Tyrone in the Central Penn Division Final — if Mount Union decides to play. That game is currently scheduled for 10 a.m. Saturday at Armagh Field in Milroy. The championship game would be played at 12:30 p.m. It is a double elimination tournament. Mifflin County is the only team remaining without a loss in the postseason.

Mifflin County needs to win the tournament in order to earn a spot in the Independent League Regional.

“It’s really fun and it’s great to be with the team and everything,” Bailey said. “We just hope to keep things rolling and see how the finals go.”

Schlegel said the team is ready for the opportunity.

“We’re ready for next weekend and we’re going to go in hungry,” he said. “We’re looking for good at-bats and quality pitching. We will be ready.”

McGonigle’s message to his team is simple.

“Just go play baseball and have fun,” he said.

On the flip side, Walter said that Mount Union’s focus has shifted to preparing for the Independent League Regional.

“We’re confident,” Walter said. “We will have everyone back from the beach for Hollidaysburg. We will be ready and we will be strong.”

LEWISTOWN — It was winner-take-all Friday night when two friendly foes took the field to battle for the Mifflin ...