Sentinel photo by WILLIAM WHISLER
Mifflin County’s Colby Bodtorf was sharp all evening, but a three-run third for MU was too much to overcome. 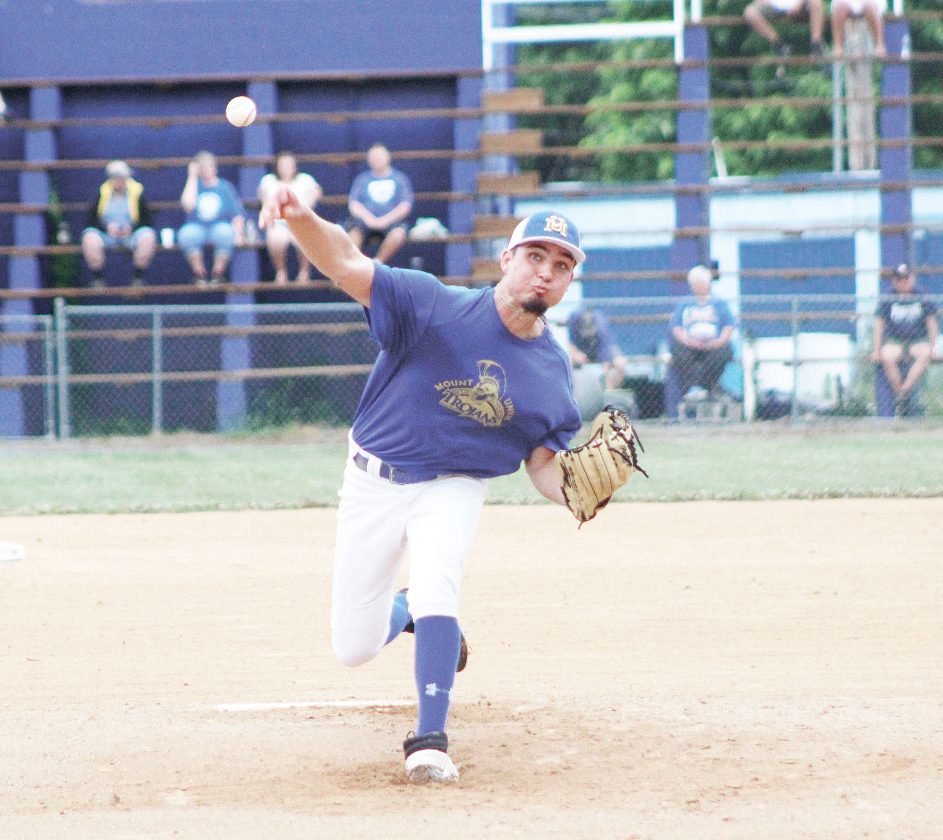 The two stars on the mound mowed down hitters all night and at times cruised on the mound, sending players back to the dugout shaking their heads.

In the end, Gearhart’s star power was too much to overcome, as the Mount Union alum dazzled hitters with an electric fastball and a sweeping bender, throwing a complete-game shutout to give Mount Union a 3-0 victory over Mifflin County in an Independent League baseball contest on Sunday night at Armagh Field.

Gearhart used his fastball to get ahead often and mixed in his curveball effectively to rattle hitters. Gearhart racked up the strikeouts all night, punching out 12 batters while allowing just four hits.

“It just felt like I was back to normal and like I was pitching in college ball again,” Gearhart said. “I just felt like I was sharp all over again. I worked myself into a couple full counts which made it tough, but I don’t look to get strikeouts, I try to get groundouts, pop-ups and get outs any way I can to win a ball game. Strikeouts come, and a good bit of them came tonight.” 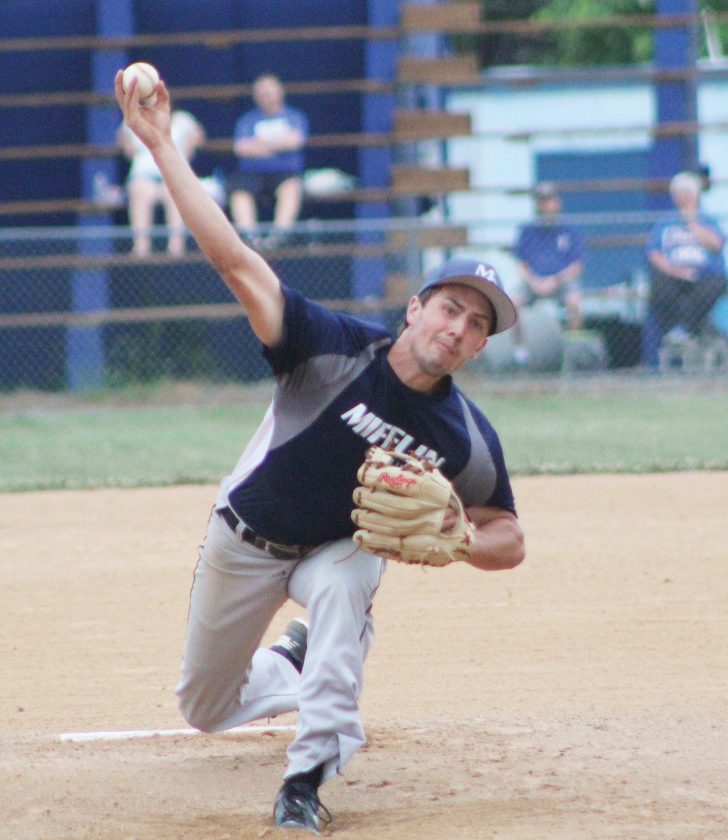 Sentinel photo by WILLIAM WHISLER
Mifflin County’s Colby Bodtorf was sharp all evening, but a three-run third for MU was too much to overcome.

Mount Union coach Marty Walter was elated with the performance he received out of his star player.

“I asked him how many he could go and he said ‘I’ll let you know,’ so he was going to be there until he was done,” Walter said. “He’s the leader of the team and everybody follows him. We knew if he was on, we just needed to score some runs to support him.”

Bodtorf had energy on the mound and seemed to have a little extra zip on his fastball, commanding his pitches well. He managed to avoid tough situations throughout the evening.

“I really felt like I was keeping the ball on the corners and not letting much over the plate,” Bodtorf said. “I was mixing up speeds a good bit.”

The lone blemish came in the third inning, as walks to Tyler Renninger and Cael Walter, and a base hit by Grayson McClain put Gearhart up with the bases-loaded and two outs for Mount Union (7-3). Gearhart worked the count and drove a two-run single into center field to score Renninger and Walter. McClain later scored on a wild pitch to score the third and final run of the night.

“I played every situation imaginable in my head before the [at-bat],” Gearhart said. “I don’t know. He grooved me a fastball and I was able to put a barrel on it.”

“Colby was ready to go from the start and he pitched a heck of a game,” Mifflin County coach John McGonigle said. “We’re really happy with his performance tonight. He’s the first one we’ve let go seven innings and run up the pitch count this year, as we’re getting to the point where we have to do that. He showed what he’s all about. He’s a competitor all around and he gives us his all every single night.”

Mifflin County (8-2) had a chance in the first inning, as Bryce Dobson singled up the middle, stole second base and advanced to third on a wild pitch with one out in the inning. Jaxson Pupo delivered a high flyball to deep left field that landed right near the foul pole, but was ruled a foul ball. Pupo struck out and Ethan Eichhorn grounded out to third to end the threat.

“We had a chance to turn the ball game in the third inning with first and second with nobody out,” McGonigle said. “You can’t do that against a pitcher like this. You have to take advantage of those opportunities and Dylan threw a great game for them. We just couldn’t find those key hits tonight to get the ball rolling in our favor. You’re going to play games like that. These are two really good teams and it’s going to be a battle the rest of the way.”

Alters was the only hitter in the game with two hits on either side.

“Isaiah Alters at the bottom of the lineup did really well tonight,” McGonigle said. “It was a battle tonight at the plate, no doubt about it. We have to come back, reset and get the bats rolling again on Tuesday night against Clarence.”

Mount Union wraps up the week with victories over the top two teams in the league in Mifflin County and Tyrone.

Walter said the approach is still the same.

Mifflin County returns to action on Tuesday when it hosts Clarence, while Mount Union will travel to Huntingdon. Both games are scheduled for 6 p.m.