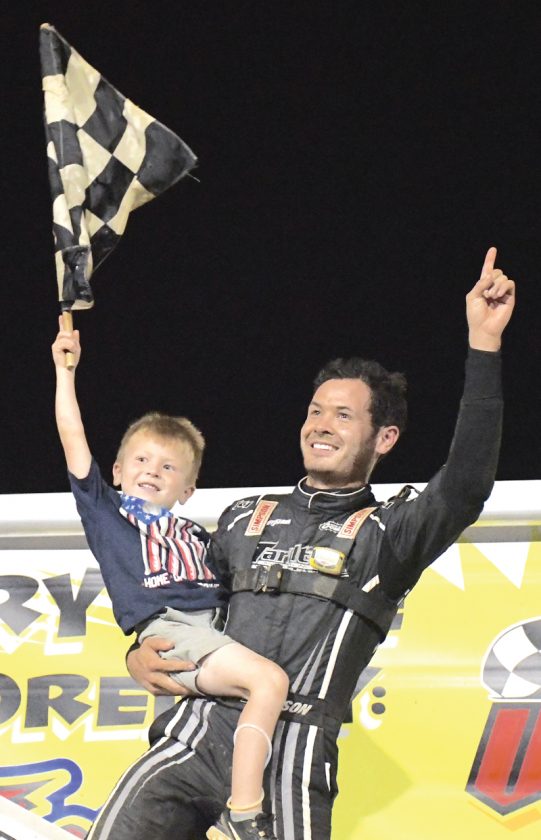 PORT ROYAL — The second half of Pennsylvania Sprint Car Speedweek belonged to Kyle Larson as he won four of the final five races leading to his first PA Speedweek crown.

Larson had an insurmountable lead heading into the Port Royal Speedway finale Saturday night. It’s the first time since Stevie Smith’s title in 2015 that the champion was decided before the final main event.

“It has been good and really fun,” Larson said. “I hoped to come here and have good speed and win. I feel like we had the week I expected. I felt like we’d be consistent and challenge for wins most nights and get a few. It has been good.”

He earned $57,600 total including $5,000 for the championship. He owns eight career Speedweek wins now, which ties him for fifth all-time. He’s the ninth different driver to win a Speedweek title.

Larson, of Elk Grove, Calif., kicked off his week with two runner-up finishes at Williams Grove and Lincoln. He finished third in his first-ever visit to Selinsgrove Speedway.

Larson’s worst finish of the week came at Lincoln’s Monday race where he finished sixth. He won Grandview’s race for the third time in the last four years. He finished fourth at Port Royal. He dominated Hagerstown for his first win there and then the big one for him.

A win in the Mitch Smith Memorial at Williams Grove Speedway. While the $15K winners share was big for Larson winning at the historic track meant a lot to him.

“To get a win at Williams Grove last night was something I wanted to do now for a long time,” Larson said. “You don’t have many starts there either, so it’s nice to get it early in my career.”

He capped it off with a win at Port Royal in the Greg Hodnett Classic.

Larson really doesn’t have many starts at any tracks other than in his home state of California and Indiana where he was the 2020 Indiana Midget Week Champion in June.

“I have a lot of fun with bouncing around and hitting a track once a year,” Larson said. “I think that also says a lot about Paul (Silva) and his ability and mine of just being able to adapt quickly to different tracks and surfaces and competitors, too. I think that all is really tough. Not a lot of people can do that. For our small team to be able to do that against tough competition says a lot.”

Larson is a true Outlaw showing up wherever he wants and many times leaving with the most money.

“I like that,” Larson said. “I’ve had a lot of fun getting to do what I’ve done so far in this short month and a half since we’ve been back racing. It’s cool to be able to pick and choose what we want to do and not be so committed to one thing and I feel like that makes us better being able to venture out and race more than say the Outlaw guys are going to do right now.”

“It helps us play a little bit of catch up since we only get to race — in the past — 20 races a year. We’ve done that in a couple weeks. We’ve needed it. I feel like we’ve gotten behind with out race car the last couple years and for us to get to race a lot has helped us get our car better.”

Larson and Silva have tremendous chemistry.

“I’ve raced with Paul since the end of 2012,” Larson said. “Really ever since we started, we only ran maybe 20 races tops a year together. We’ve got a great relationship. He managed KLR for a while. To get to race his equipment is a lot of fun. I have the most confidence in him that I know my racecar is going to be competitive each and every night and I know showing up to the race track, I’m going to have a shot to win. That definitely helps.”

“We work well together because we have that trust in each other, and I think we both believe that we’re each not as good as we are without each other. I think that’s a big part of any relationship.”

It’s safe to say Larson has forgotten about his miserable first Speedweek appearance back in 2012.

“That was one to forget,” he said. “Thankfully I have forgotten. It just didn’t go good. We had a good Ohio Speedweek and came here with some confidence and struggled. I don’t even remember the races. I wrecked lap one at Lincoln and went to Grandview and finished third. It was not fun. I didn’t enjoy PA at all for a while until the last few years.”

Larson planned to take Sunday night off before joining the All Stars and Ohio Speedweek.

“We’re going to go straight to Ohio from here,” Larson said. “We were planning on racing Fremont, but we’re going to take that off and get caught up on some sleep and get caught up on a lot of things. After Ohio Speedweek, we’ll do the Brad Doty Classic and right now, unless something bigger pops up, we’ll come back to Pennsylvania and do Williams Grove and Port Royal.”

Penguins even series with Canadiens

Phillies fall to Yankees in their return to play, 6-3