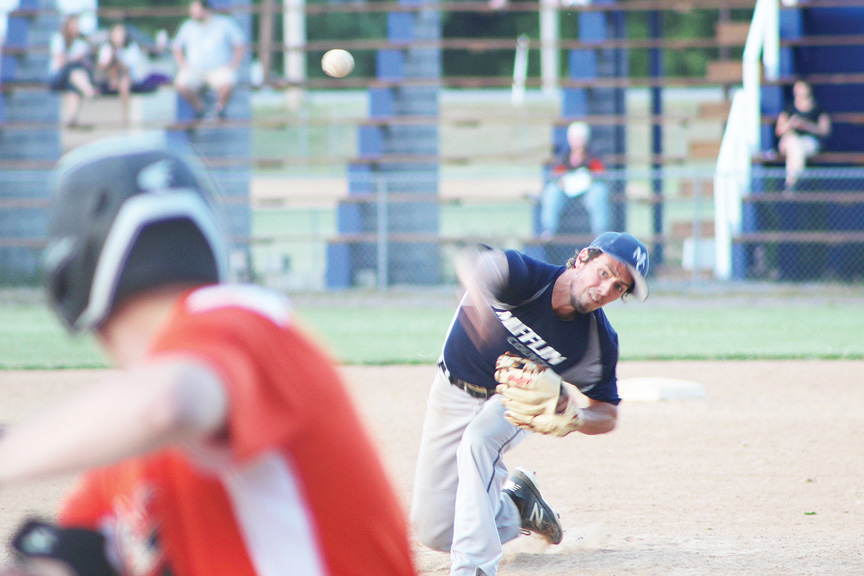 Sentinel photo by WILLIAM WHISLER
Mifflin County’s Colby Bodtorf threw 6 2/3 innings in relief to pick up the win over Tyrone in an Independent League baseball contest on Thursday in Milroy. Bodtorf also scored after hitting a leadoff double to start the game. Bodtorf yielded just one run and walked none.

MILROY — Baserunners were easy to come by for Mifflin County on Thursday evening, but driving in runs was a different for story.

After a three-run first inning, Mifflin County’s offense cooled off substantially, but a late rally that included a bases-loaded walk by Rylan Bailey to score the go-ahead run proved to be the difference for Mifflin County as it topped Tyrone, 5-3 in extra innings, in an Independent League baseball contest in Milroy. Cole Knable added an insurance run, reaching on a dropped third strike.

Mifflin County (3-0), playing as the road team at Armagh Field since Tyrone does not currently have a field to play on, plated three runs in the first inning on a sacrifice fly by Ethan Eichhorn, a wild pitch by Tyrone starting pitcher Aiden Coleman and a base hit by Bailey.

The Mifflin County hitters recorded just three hits in their final 36 at-bats following Bailey’s RBI single that scored Colby Bodtorf, who led off the game with a double — the only extra-base hit of the night.

Tyrone got a run back in the bottom of the first as Bryce Hunter got hit by Eichhorn’s first pitch of the night, before coming around to score on a throwing error.

“It was definitely a hot start and things sizzled out there pretty quickly after the first inning,” Mifflin County coach John McGonigle said. “Five hits in the game, and to put up five runs — it was a battle. We’re happy to come out on the winning side.”

Eichhorn worked well with the lead before handing the ball over to Bodtorf, who pitched 6 2/3 innings in relief on his way to the win. Bodtorf had good control of his pitches and was the only pitcher in the game to not walk a batter.

“I was just trying to throw strikes,” Bodtorf said. “It’s always great to know when I come in that my teammates are going to pick me up and tell me to keep my head up to keep going out and keep battling.”

Bodtorf scattered eight hits but never ran into serious trouble. He gave us his only run in the seventh inning when a sacrifice fly by Rodney Shultz scored David Lang to tie the game at three. Tyrone’s second run came in the fourth inning on an RBI single by Lang.

Bodtorf’s command of the corners allowed him some room for error.

“I really felt like I was working around the zone and was able to leave them on the corners and didn’t put much over the plate,” he said. “It definitely was a confidence boost to know that I could reach out to the corner as far as I needed to.”

Lang relieved Coleman on the mound for Tyrone in the sixth and dazzled Mifflin County hitters, striking out the side after a lead-off walk to Eichhorn. Lang retired 12 straight batters before Mifflin County’s Isaiah Alters laced a line drive into left field to start a rally.

“We needed that,” Bailey said of Alters’ hit that started things in the ninth. “Chuck came off the bench and came up big. When players can come off the bench do something like that, it’s big.”

McGonigle was proud of how Alters has came through when they’ve called on him.

“Every time Isaiah gets his chance in these last two games, he has hit two rockets,” McGonigle said. “You can’t take anything away from him, he’s working hard every chance he gets and is taking advantage of his chances. He comes in and works hard every single day.”

Alters advanced to second base on a balk before coming around to score the go-ahead run on a bases-loaded walk that Bailey drew after working a 2-2 count.

“I just knew I needed to pick out good pitches,” Bailey said. “I knew it would be big for the team to get the run, so I just picked out good pitches, battled a little bit and was able to work out the walk.”

Knable reached first after striking out on a pitch in the dirt. Drake Schaeffer scored on the play.

Bodtorf retired the first two batters in the bottom half of the inning before giving up back-to-back singles to Blaine Hoover and Hunter. Bodtorf got Shultz to fly out to right to end the game.

McGonigle was especially pleased with the fight the team showed despite struggling to drive in runs. Mifflin County stranded 10 runners in the game. On the other side, Eichhorn and Bodtorf stranded 12 Tyrone baserunners.

“These guys, they battle hard every single day,” he said. “They come here ready to go. Even though they don’t get the results that they want every single at-bat, they keep on pushing themselves. I give them all the credit in the world for their resilience.”

Mifflin County was never rattled when Tyrone tied the game and fighting back in the ninth was a special moment for the players.

“These are the special ones, because everyone is always in the game and pumped up, ready to get that next run,” Bodtorf said.

Even though it was ugly at times, Mifflin County keeps on finding a way to win. Mifflin County will continue play on Saturday when it travels to face Huntingdon at 10 a.m.

“It’s good to get off to a hot start here,” McGonigle said. “We have some things that we need to do a little bit better but I think if we can keep going the way that we are going right now I’ll be excited to see where we can end up. If we take care of ourselves and play within ourselves and we’re able to reset after a bad cut or a bad pitch, things will take care of themselves.”