Wildcats’ grad finished with over 900 points 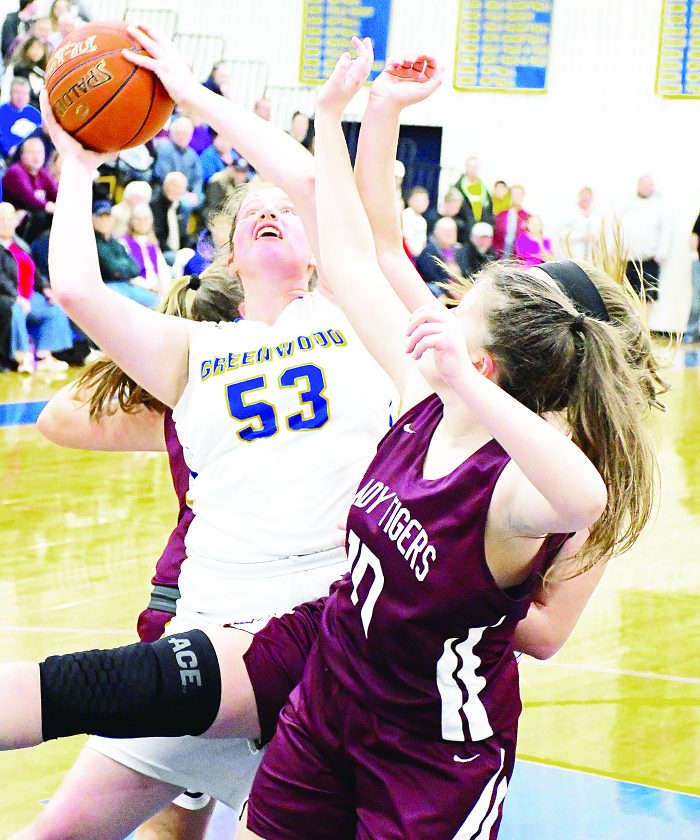 Sentinel file photo
Greenwood’s Alli Walton pulls down a rebound against East Juniata in April. Walton will be playing basketball for the Penn State-Harrisburg Lions in the fall.

Walton grew into one of the top players in the Tri-Valley League, earned recognition as a first-team All-Star and became one of the leagues’ top rebounders in her final two seasons. As a senior, Walton helped lead the Wildcats to a 21-8 season, a District 3 title game appearance and a PIAA tournament berth while averaging 10.9 points and 7.75 rebounds per game.

Walton finished her playing career with 909 career points and 811 rebounds in 106 games.

The work she put in paid off late in her career, as Walton began to shift her focus from softball to basketball in her junior season. Walton signed her letter of intent to continue her academic and basketball career at Division III Penn State-Harrisburg next season.

“In my junior year, I was always thinking of playing college softball and not basketball, but then Mr. Deitz came up to me and my parents at a summer league game and was like hey, the Penn State-Harrisburg coach wanted to reach out,” Walton said. “I went on a visit and I loved the campus and the coach, he was so nice. Pretty much after that, it was really where I wanted to go. The coaches were really nice and the professors I met that day were nice and supporting. That helped me make my final decision.”

Walton had initially explored the possibility of playing at Lycoming College before deciding on the Penn State branch campus.

“Lycoming was my other one,” Walton said. “I really loved Lycoming and I visited there first. I was set on it and I loved the campus and the coaches. I was thinking about it and went on my visit to Penn State-Harrisburg and it offered so much more and was a better community. That knocked Lycoming out of the picture.”

The Wildcats advanced to the District 3 championship game this season and lost a heartbreaker to Lancaster Country Day in Hershey, before advancing to the second round of the PIAA tournament.

“We wanted to go further and that was disappointing, but it was a great feeling to just play the game of basketball and get back out there,” Walton said. “It was probably just one word – satisfying. We didn’t win a district championship, but we did get to that part and we reached our goal, but we didn’t finish our goal. It was satisfying to get there, but we didn’t finish it.”

Greenwood coach Jeff Deitz saw Walton progress as a four-year starter and was proud of the player she became.

“The cool thing was that Alli kind of paid her dues a little bit,” Deitz said. “As a freshman she probably was our third option as a big and in her sophomore year she was our No. 2 option as a big. She grew into that role her junior and senior year and as a junior, she led the league in rebounds and averaged 13 points a game. As a senior she ups her assist total, she rebounds for us and is second on the team in scoring.

“When you are fortunate enough to have a good point guard and good players on the outside, a good post player really completes that package and I felt like that was what she was able to do for us. She drew a lot of attention which opened the perimeter up for our guards. Alli was the vocal leader that we needed on the floor.”

Walton said that it was hard to grow into the leadership role at first, but once she realized that her teammates fed off the energy she provided on the court, she was able to grow into the role.

“At times I didn’t take it very well because my coaches would tell me at practice that the team would follow me and my energy and if I was down, they would say the team was down,” Walton said. “At times I didn’t take that very well because I wondered why they would be following me because I was just one person, but toward the end I got better and realized if my energy was high, there’s was high too. It helped me to move into a role and keeping that high energy.”

Walton also led off the court, helping with the team’s youth program, along with her teammate Kenedy Stroup who is continuing her playing career at Mansfield.

“Both Alli and Kenedy helped with our youth program this year,” Deitz said. “They both did some community service in this year by helping to get to know the younger kids in the program and letting the younger kids know them. We have some kids in the elementary programs who know who Kenedy Stroup is and know who Alli Walton is and hopefully know what they’ve done on and off the court that will foster a love for the game and push some younger kids to put a ball in their hands.”

Walton plans to major in kinesiology and minor in business. She hopes to become a physical therapist.

She also thanked her family, teammates and coaches for helping her earn an opportunity to play in college.