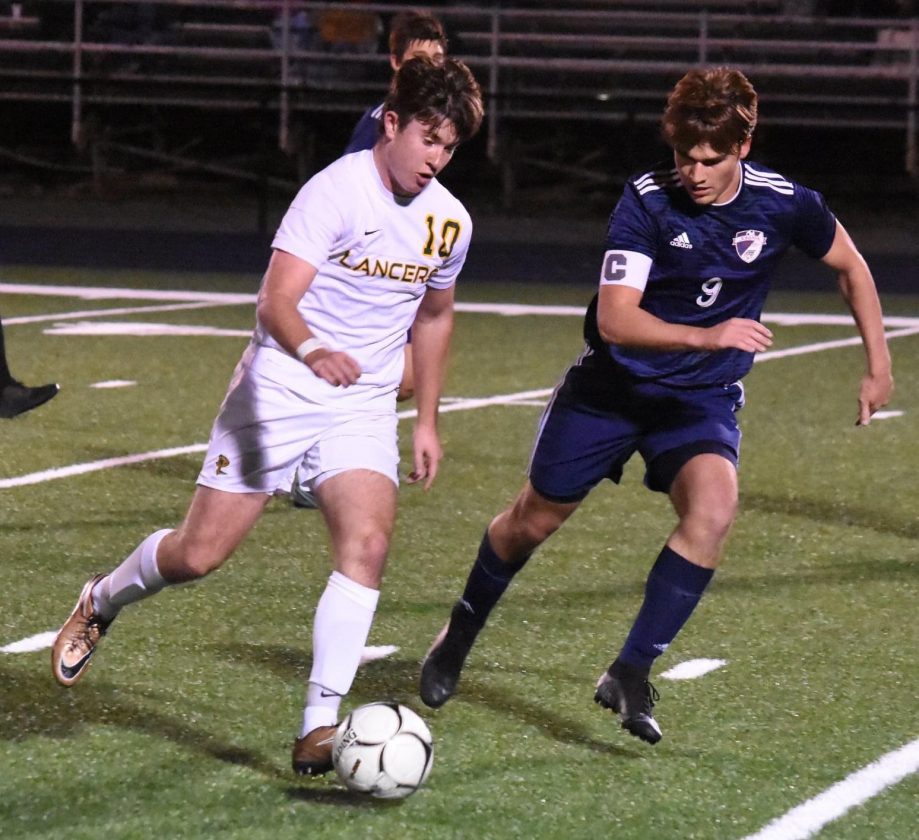 Sentinel file photo
Juniata’s Barrett Walters, right, was a senior defensive captain for the Indians and will continue his career at Juniata College.

MIFFLINTOWN — Juniata High School’s Barrett Walters was a standout dual-sport athlete in his four years in an Indians jersey and after a lengthy recruiting process, Walters earned the opportunity to compete in soccer and throw the javelin at Juniata College.

Walters, a senior team captain for the Juniata boys soccer team, helped lead a talented Indians team to its first District 6 Class 2A championship with a 2-1 victory over Huntingdon. The team finished with a record of 15-8 and earned a PIAA tournament berth.

“It was pretty stressful leading up to the championship final,” Walters recalled. “The game before we were able to get into the district final. Being able to get through and get the win was a huge accomplishment, and to be the first team to do that at Juniata High School. It felt great to be a captain and a team leader and be able to lead those boys to a district final and have a good record. That felt really good.”

Walters was recognized as a Tri-Valley League First-Team All-Star for his ability on the defensive side of the ball. Walters was an elite defender on the soccer field for the Indians, who excelled at winning back possession and creating turnovers.

His main goal on the soccer field was simple — rack up as many shutouts as possible.

“A goal I set for myself usually is to see how many shutouts the backline can get in order to keep a zero on our side,” he said.

His favorite memory on the field was beating rival East Juniata twice in his senior season.

“Beating East Juniata at home and away was a pretty memorable moment,” he said. “It’s been a long time since a Juniata team had been able to do that.”

On the track, Walters excelled as one of the team’s top competitors in the javelin. Walters continued to progress throughout his high school career and unleashed a career-best throw of 161 feet, 8 inches at the 2019 Mountain Lion Classic at Altoona’s Mansion Park. He finished first in the javelin at the Tri-Valley League meet last spring as well.

Walters was bummed that he lost his senior season of track due to COVID-19, especially since track was a sport he enjoyed as his secondary sport.

“I was really disappointed,” he said. “Track is kind of my fun sport where I can sit back and relax. I have all of my friends there and we come together. We are all on the track team, even when we play different sports in the fall. The spring is a fun time to get to do that. It was pretty disappointing to not be able to have a final season with them.”

Getting the opportunity to continue his career in both sports was important to Walters, and something that allowed him to choose Juniata College over Elizabethtown College.

“I was looking at Elizabethtown and I was going to try to do both there too, but that kind of fell through and that was a little stressful,” Walters said of the recruiting process. “I moved my attention toward Juniata and that’s when the new [men’s soccer] coach there offered me to come play and the track coach wanted me to throw for them as well.”

Walters said that he chose Juniata College because it offered him a chance to continue competing in both sports while being able to enroll in Juniata College’s environmental science program that offers students various opportunities at Raystown Lake.

His opportunity came as the Juniata soccer coach offered him a spot, followed by the Eagles’ track and field coach.

Walters said his goals for his college career include just bettering himself on the soccer field and beating his personal best from the Mountain Lion Classic.

Walters thanked his family, his junior high, high school and travel coaches, as well as Mike Elder for helping him earn a spot with the Eagles’ men’s soccer and track and field teams.

Overall, he’s just ready to take advantage of the opportunity to keep playing the sport he loves.

“It feels amazing,” he said. “It’s great to have more chances to play soccer.”—