Indians’ hurdler to compete for PSU-Harrisburg 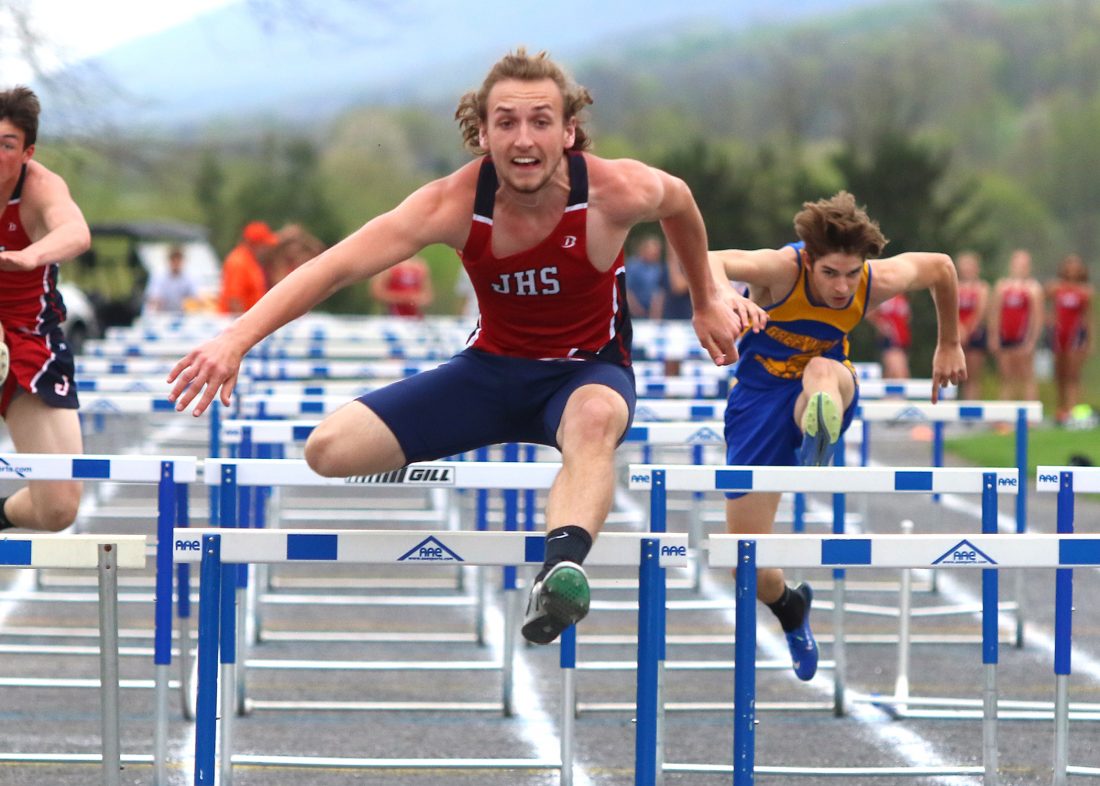 Sentinel file photo
Juniata’s Will Tyson, center, will continue his track career at Division III Penn State-Harrisburg. Tyson specializes in the 110-meter and 300-meter hurdle events, competed at the 2019 PIAA Track and Field Championships after a stellar performance at the District 6 championship.

MIFFLINTOWN — Juniata’s Will Tyson paid his dues in his high school hurdling career. Each season, he dug a little bit deeper, with the ultimate goal of competing at the PIAA Championships there from Day 1.

Each season, Tyson grinded away at his goal before he finally reached the PIAA Championships as a junior, qualifying in both the 110-meter and the 300-meter hurdle events on the state’s biggest stage.

“It was amazing. I just remember, even at districts where I lost the 300 hurdles by such a slim margin, all of my friends — Barrett Walters, Garrett Baublitz, Clay Yeager, Tad Shellenberger — they all pushed me and told me that I was fine and that I was going to states,” Tyson said. “When I went there it was my first time being [at states]. Those guys all told me that I’d be fine and that I would tear it up and to just be me and to run what I know. Even though I had a sickness at states, I am still proud with what I ran and was hoping I could do it again this year.”

Tyson’s work paid off as he earned a chance to compete at Division III Penn State-Harrisburg — the school he wanted to attend from the beginning and the only school he gave major consideration.

“What set the school apart was when I went to visit, all of the coaches and the kids made me feel welcome there,” Tyson said. Just the way that [Juniata graduate] Alex White, helped me meet the coaches and some other runners — they all were really nice and told me that I would have an awesome time here and it’s a lot of fun.

Tyson remembered the beginning of his career in the hurdles, coming in as the one of the lowest guys in the pecking order. He decided that if he was going to accomplish his goal of making it to states, he was going to have to put in the work.

“My freshman year I was the last man on the totem year and in my junior year I was going to states,” Tyson said. “It was something that I had dreamed of doing and when it finally came true, I was so happy. I didn’t really know how to handle it. I was so excited.”

Losing his final season of track was disappointing for Tyson, especially in what could have been a stellar season for a talented group. He had big goals for the 2020 season, including re-writing the record book in both of his main events.

“I was very disappointed. I am not a track star to say the least, but I was still very disappointed, and I was hoping that maybe this year I could get the school record in both of the hurdle events,” Tyson said. “I was hoping I could get all my friends — we were all going to push each other to get to states and have one great senior year. We were hoping to go undefeated again and when we got the news that school was closed and that all of the sports were done, it was kind of a heartbreaking moment for myself and a lot of my running mates that I know.”

In spite of a lost season, Tyson reflected on the things that his team was able to accomplish and looks back fondly on the camaraderie of the Juniata track team.

“Definitely the people that I was surrounded by,” Tyson said of his favorite memories. “Those guys helped me even when we were together after track, and during the offseason, we were working together. Just the work ethic that everybody had and wanting to be at the top. If you run and you push yourself, you can pretty much do anything and it was my favorite thing. I would just run until I could like hardly do it anymore, and to look back and say I did all of these things in my junior year, when I was the last man on the team my freshman year — I was amazed.”

Tyson’s main goal at Penn State Harrisburg is to make qualify for NCAAs.

“I would like to show up to a championship race,” he said. “Even though the school is D3, just to say that I was able to have a chance to run against the best of the best in college, that’s definitely my top goal. My other goal is to just be me, run what I know, hit some new PRs and tackle some new events.”

The Juniata hurdler plans to major in kinesiology and find a career as a physical therapist or an athletic trainer to stay in sports after graduation.

Tyson thanked his friends on the team, his coaches and family for helping him reach what he thought was unattainable.

“I definitely want to thank my friends, Tad, Barrett, Garrett, Clay,” Tyson said. “Those guys pushed me to do the unthinkable and pushed me to get to where I did. I couldn’t have done it without them.

“My family was a big help. They always taught me that hard work and dedication could get you anything and get you anywhere, and that definitely showed up in the end. I want to thank Kim [Hart] and all the coaches. They did an amazing job of handling everything at practice and handling everything with running. They also taught me that if you work hard you can achieve your goals and that was definitely the case.”