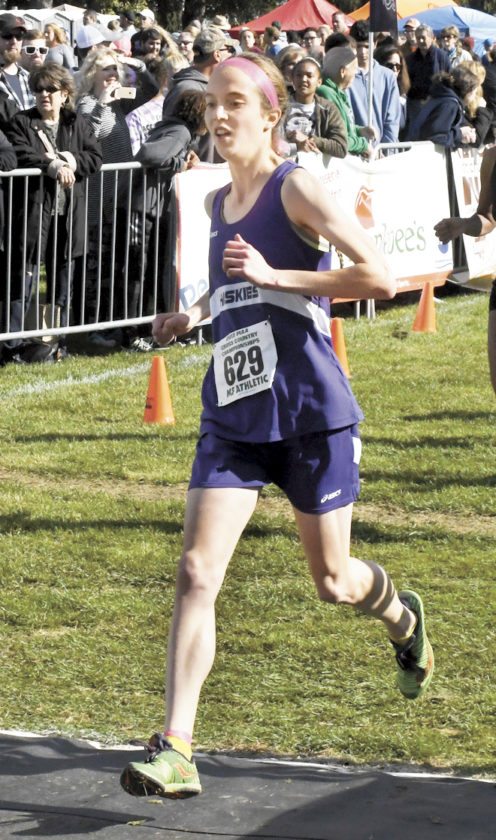 MECHANICSBURG — Former Mifflin County High School distance runner Joy Galbraith had all the makings of a top athlete early in her career but needed a little guidance to get there.

Galbraith made some adjustments and began lifting with coach Dick Yearick, setting her sights on the 2017 PIAA Cross Country Championship meet.

The hard work and determination paid off for the Huskies’ runner, as Galbraith advanced to the PIAA Championships and had a stellar career in a purple and white uniform.

“During my sophomore year, me and Dick Yearick began lifting together,” Galbraith said. “Our very first time lifting, he had me set some goals, one of these goals was to qualify for the PIAA state championship next cross country season since I had missed it my sophomore year. I honestly didn’t think I would ever make it there, but Dick Yearick believed I could and with his help and guidance I did make it, this is by far one of the biggest accomplishments of my high school running career.”

Running at Hershey was an unforgettable experience for Galbraith.

“Competing in the PIAA state championship in high school was always a fun and exciting experience,” Galbraith said. “The start of the race was by far the most intense I had ever experienced in my high school running career. The day before, we would always go down to Hershey and run the course and go to chocolate world, which always made it special.”

Galbraith made two appearances at the PIAA championship meet and earned herself an opportunity to compete in college for Messiah. Galbraith had a stellar debut season in which she finished in the Top 20 at the MAC Championships, 52nd at the regional championship and earned an All-MAC second team selection.

“These honors meant a great deal to me, but without the help from my coaches and teammates it wouldn’t have been possible,” Galbraith said. “Now that I am running in college, I put less pressure on myself in races and somehow with that pressure lifted, I perform better and I also don’t have as much time to be nervous before races. Coach also puts us in running packs by time which has improved my racing as I always have a teammate there to push me.”

The opportunity to compete for the Falcons came as a surprise as the coach had reached out to Galbraith about competing for them before she had expressed interest in the school. Her decision was a lot easier to make since the school had her major and was close to home.

“I choose Messiah College because I wanted to attend a small Christian school that was close to home, and it was one of the few that had the major I wanted and a cross country and indoor and outdoor track program,” Galbraith said.

Galbraith’s freshman indoor season was a challenging one, as she dealt with injuries following the regional cross country meet that forced her to miss most of the season. Despite facing adversity early, Galbraith still found a way to compete late in the season and qualified for the MAC championship in the 3K and the 5K.

“Running the 5K on an indoor track was quite a unique experience,” Galbraith said. “Twenty-five laps is a lot of laps on an indoor track, but I like a good challenge. Even though I was out for most of the season, I was content with my performance at MACs. We have a really strong and talented track team and getting to see them compete at MACs was a great experience. We had several girls qualify for nationals as well, one of which was a defending national champion in the mile.”

Galbraith’s first spring season was taken away with the cancellation of spring sports due to COVID-19. It was difficult to take at first, but she felt empathy for the senior class and hopes to just make the most out of her final three seasons.

“I was very disappointed when I heard that the spring season was canceled, but I have three more years left of running,” she said. “The seniors are the ones I felt bad for, especially the ones who had qualified for nationals.”

In the meantime, Galbraith has been continuing to do core exercises, while running and biking, along with finishing classes for the spring semester.

Her goal for next season is to improve in the 5K and earn a top finish at the MAC championship meet.

Her favorite memories at Mifflin County included earning a 4×800 relay time that beat the Harrisburg High School boys team, competing in invitationals and continuing to work through hardships.

Galbraith thanked Yearick for his help in allowing her to reach her potential.

“I would like to thank Dick Yearick for all he has done and still is doing for me and for believing in me even when I didn’t believe in myself,” she said.