Three-sport athlete excels on the field 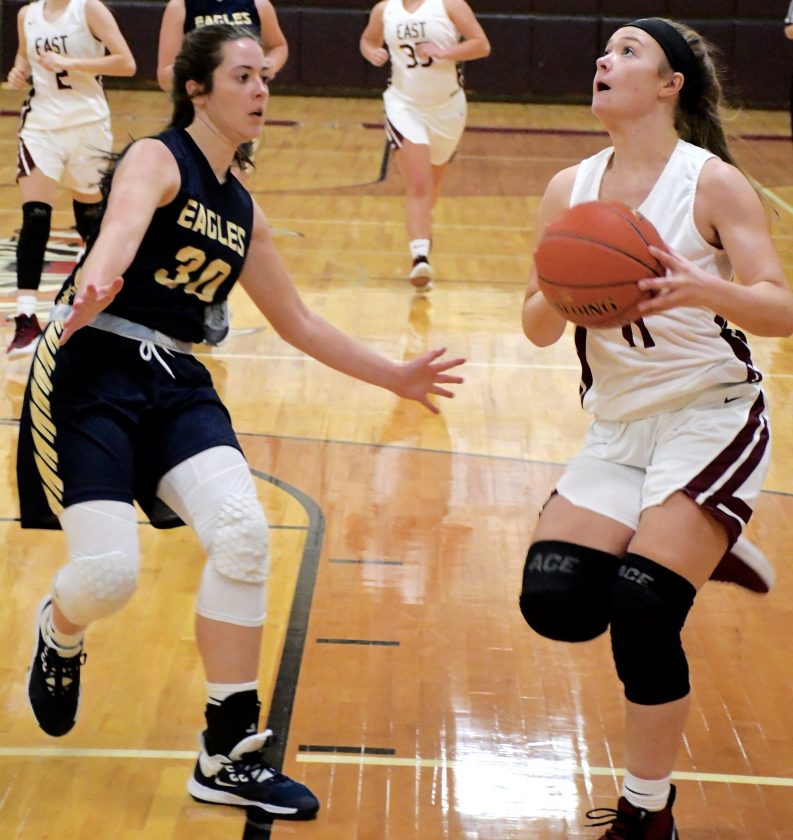 Sentinel file photo by MIKE GOSS
East Juniata’s Clarye Guyer, right, drives to the basket for a layup. Guyer led the Tigers in scoring and was a TVL All-Star this season.

COCOLAMUS — East Juniata senior Clarye Guyer has faced more than her fair share of obstacles in her athletic career.

After battling through a broken leg early in her high school career, the three-sport athlete for the Tigers became one of the school’s top athletes and she was recognized for her efforts when she was named a Tri-Valley League Second-Team All-Star for the Tigers girls basketball team this past winter.

Guyer led East Juniata in scoring and averaged 10.19 points in league play, while also leading the Tigers in 3-pointers in TVL play (23). She finished second in steals with 49.

Her relentless attitude and ability to fight through adversity is what led her to success in every sport she plays.

“She led us in scoring, she was a great rebounder and a great defender,” East Juniata girls basketball coach Travis Quici said. “Coaches always say that they have kids that would run through a wall for you, and I believe I had 12 or 13 of them and Clarye would’ve been leading the charge. She would’ve broken down all of the barriers. I’m really proud of her and what she has accomplished this year.”

Guyer broke her leg following her freshman year and was forced to sit through soccer season before trying to come back for basketball. She was uncertain in what her future would hold on the court, but encouragement from Quici helped lead her back to the hardwood.

“I sat down with her in the library and said ‘I know your game from junior high, and I know what you are capable of. I think you could have a good impact on our program and really leave your mark on East Juniata girls basketball,'” Quici said. “She came back from the broken leg and as a junior and a senior, she really stepped up. She had a phenomenal season for us and was one of our go-to players.”

The comeback period was grueling for Guyer, but a rededication to athletics helped transform her into a stellar competitor.

“It was long. It was painful,” Guyer said of her recovery. “I broke my leg at the end of my freshman year, and I was out the whole summer and most of soccer season. I just started coming back around basketball season and it was really hard at first. I wasn’t in shape like I was, and I wasn’t as quick as I was. I really had to work that whole season to get back.

“The next summer into my junior year I ran every single day and I changed my diet habits and began to work harder for basketball, soccer season and track season,” Guyer continued. “It was just a continuous journey of obstacles that I had to overcome in order to get back to where I left off.”

Guyer was just as successful in soccer where she was named a Tri-Valley League All-Star following the Tigers magical 1-0 District 4 championship win over Bloomsburg. Guyer excelled as versatile midfielder on the soccer field.

Some of her favorite memories include winning the title and beating rival Juniata on the basketball court.

“For soccer my favorite memory this year was winning the district championship,” Guyer said. “In basketball, it was beating Susquenita and beating Juniata by a lot. Those were two great highlights from basketball season.”

Guyer also loved the time she got to spend with her teammates, who like her, played multiple sports.

“We usually travel, and we spent a lot of time together on my sports teams and that brought a lot of us closer together too,” she said. “A lot of my teammates and I spend all year together because we are all three-sport athletes. A lot of us have played soccer and basketball together since third grade and when high school came around we were playing these sports throughout the year. It really brings us closer.”

Guyer mentioned that her coaches, parents and family have been big supporters in her athletic career but a special relationship with her grandmother, Judy Peachey, meant the world to her.

“My grandma was probably the biggest influence on my basketball career,” Guyer said. “She was a basketball player herself and I always wanted to be like her, because she was a great athlete when she was younger and was such a good basketball player. When I would have a rough practice when I was younger, she would tell me to just keep working hard at basketball. She sometimes shoots with me and is really encouraging.”

Guyer competes in track in the javelin and earned a personal best at the District 4 Class 2A championships last season with a throw of 116 feet, 5 inches. She medaled at districts the last two seasons, finishing sixth as a sophomore and fifth as a junior.

Guyer was five feet short of qualifying for the PIAA championships last season and hopes to get an opportunity to do so this year, as she has been spending her down time preparing for the season at home.

“I do a lot of javelin work in my backyard because I have a good enough yard to do that,” Guyer said. “I’m not allowed to go to the school, so I work from home on the javelin and I go for some runs on back roads. I try to stay in shape as best as I can, and I keep my skills up to par as much as I can.”

Regardless, Guyer plans to attend Penn State main campus in the Fall to study geological engineering and is elated with how her career to this point has panned out.

“I’ve been blessed to be able to do these things,” Guyer said. “I’ve been playing sports forever. My parents always wanted me to play sports to get involved with other people. It shows you teamwork, makes friends — it’s truly a blessing to meet people through sports and meet coaches and learn how to be coachable. It shows you how to work together.” 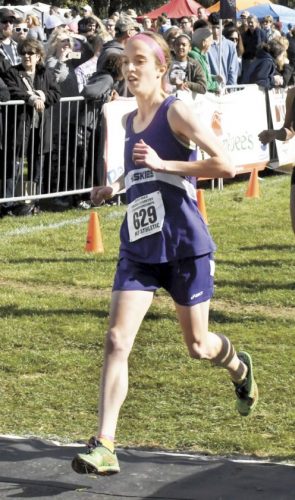