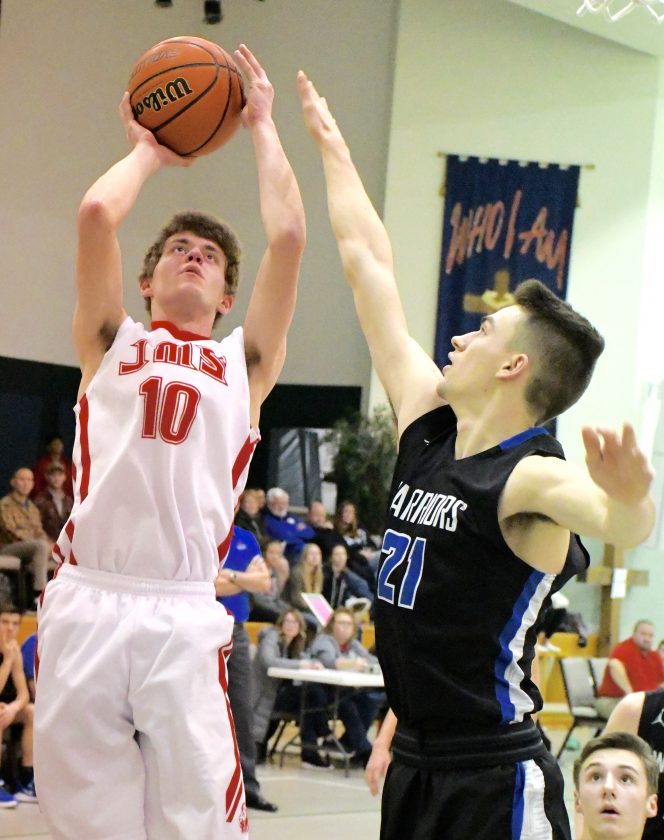 MIFFLINTOWN — Despite a strong second half, Juniata Mennonite could not overcome its mistakes in the first half in its 72-48 loss in its final game of the season to Northumberland Christian in an Allegheny Christian Athletic Association boys basketball over at Cedar Grove Church on Friday.

“Our team played really well tonight, the effort was there,” Lions coach Joe Tusing said. “We’re not playing for a playoff spot, I challenged the men to play hard tonight and they came out and did that.”

The Warriors came out running and gunning in the opening quarter of the game. As soon as a Northumberland Christian player got a hold of the ball, the Warriors immediately went on a fast-break. Juniata Mennonite was outscored 23-13 by the end of the first quarter.

The Lions’ defense continued to have fits with the crushing pace of the Northumberland Christian offense in the second quarter. Even when Juniata Mennonite managed to slow the tempo of the game down, the Warriors took to the boards creating second and even third chance opportunities behind the efforts of Jack Garvin.

Northumberland Christian took a 42-24 lead at the half.

“(In the) first half, we got ourselves in a little bit of a hole. We were down 18 at the half and against a good team, it’s hard to comeback,” Tusing said. “But we fought and clawed, it pretty much was an 18-point game the rest of the way and that’s a compliment to these young men.”

The Juniata Mennonite defense turned up the intensity a bit in the third quarter not allowing easy looks at the basket as well from the beyond arc.

“We made some adjustments on how we rotated, we did a better job rotating,” Tusing said. “Offensively, we made some buckets and like I said we hung with them just hard to comeback from 18 down.”

The Lions then turned that into offense going neck-and-neck with the Warriors only being outscored 30-24 in the entire second half.

That spark of offense came especially in the fourth quarter including Trey Tusing going off from the three point line where it seem like he couldn’t miss a shot. Tusing had nine points in the final frame and led the Lions in scoring with 15.

“Trey has been struggling shooting throughout the season… he waited till the last game to do it,” Tusing joked. “Yeah, he shot the ball well but, he also found the open man as well too. We had some guys underneath that made some nice buckets, as well.”

Tusing is very proud with how his team handled themselves both on and off the court and hopes that his players will apply what they learned to the rest of their lives.

“I said at the beginning of the season it wasn’t about wins and losses, and at the end of the season I’m saying the same thing it’s not about wins or losses it’s about growing young men,” Tusing said. “And I hope they got something out of this season because I enjoyed being here and I enjoy coaching these young men.”

Did not score: Nathan Klinger

From staff reports PORT ROYAL — After discussions with the various touring series that support us and in ...

COCOLAMUS — During the 2019-20 season, East Juniata earned a District 4 playoff spot and finished third in the ...

MILLERSTOWN — Greenwood capped off a strong basketball season, as both the boys and girls basketball teams ...

MIFFLINTOWN— In the 2019-20 season, Al Ream and his Juniata Indians finished second in the Tri-Valley League West ...