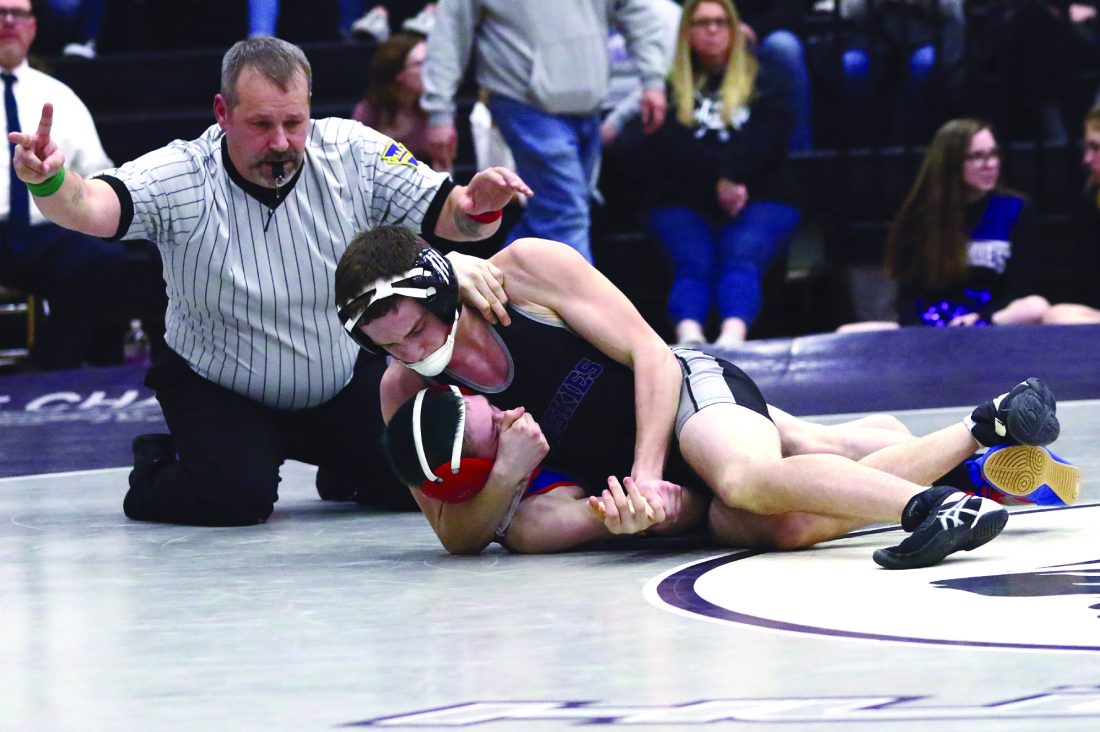 Sentinel photo by MATT STRICKER
Mifflin County's Adin Thorpe, top, gets take down points while wrestling St. Marys’ Tanner Quackenbush at 113 lbs. on the way to a win by pin Thursday in Lewistown. This was Thorpe's varsity debut.

LEWISTOWN — If the dual meet with Saint Marys is any indication of the focus and intensity Mifflin County brings into the post-season, the rest of District 6 better look out.

The Huskies ended the dual-meet season with a dominating 62-3 non-league victory over the Flying Dutchmen on Thursday.

Mifflin County (15-2) won 13 bouts, scoring bonus points in 10 matches. One of those bonus wins came at 113 when Adin Thorpe, making his varsity debut, built up a 6-3 lead before decking Tanner Quackenbush in 3:22.

“When Hunter Johnson went down we started looking at descent plans to see if anyone was actually eligible. Unfortunately, he wasn’t for district duals but he was for this match,” Mifflin County coach Kirby Martin said. “He said he wanted to get a varsity match, so we set the plan in motion and he got a varsity match. He was super nervous and very excited to have the opportunity and then the ultimate, to get the pin, it doesn’t get any better than that. He’s a kid who shows up every day and never complains. We are just super happy for him.”

The Huskies kicked things off with Kyler Everly and Ethan Kauffman bumping up to 138 and 145 respectively. Everly (25-10) collected three takedowns en route to the 12-1 major decision over Logan Mosier at 138. Kauffman (19-9) had a takedown in the second and third periods to hang a 5-1 loss on state-ranked Tylor Herzing at 145.

“I knew we were going to get some quality matches and I’m very proud of the kids and their toughness tonight. We haven’t had competition for a week, week-and-a-half, so this was a good tune-up,” Martin said.

Saint Marys (6-7) recorded its only win of the dual meet when Nick Crisp defeated Trey Shoemaker 7-2 at 160-pounds. Mifflin County followed with 10 consecutive wins to close out the victory.

“That was the intention of having a match this late in the season, to get us ready for districts. You want to keep that competitive edge. Overall, I’m very pleased with the matches and we had some good ones. I’m very happy with how we performed tonight,” Martin said.

After Thorpe’s win at 113, Derek Burk (17-8) kept the victory parade moving with a 14-2 major over Isaac Dellaquilla at 120. The Husky senior blew open a 5-0 lead with a nine-point third period with three takedowns and a three-point nearfall.

Lucas Sheetz took out Connor Gausman by fall in 1:16 at 126 and Marshall Maidens won by forfeit at 132 to close things out.

The Huskies won the takedown battle,19-2. Mifflin County travels to the Altoona Fieldhouse for the District 6 Class 3A championships on Saturday, February 22.

“I’m really happy with the practices. This time of the year we have learned to taper and make them shorter. It seems to be keeping them fresh and the effort in practice is great,” Martin said. “We want to go to districts and make a statement. We’re not satisfied with how district duals ended. We want to make a lot of noise at districts.” 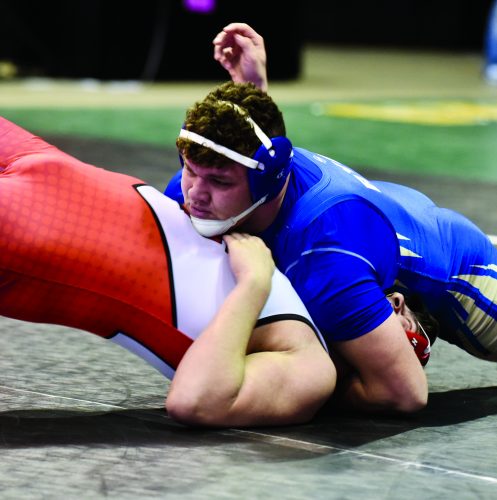