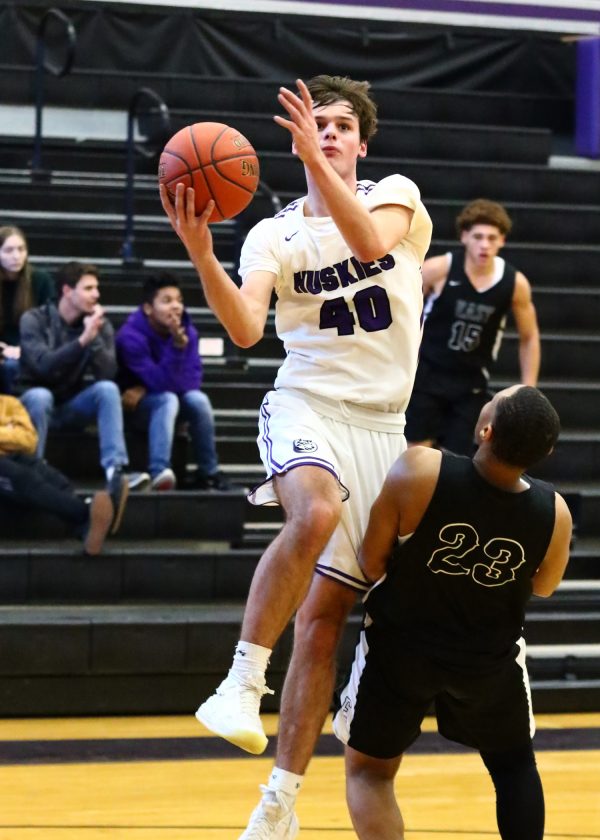 LEWISTOWN – The Mifflin County boys basketball team, minus leading scorer and rebounder Connor Cherry, had no answer for Central Dauphin East in a Mid-Penn Commonwealth matchup on Monday.

The Panthers dominated the glass with a 38-11 rebounding edge and shot a torrid 11-for-14 from three-point land to hand the Huskies the 84-37 defeat.

“It definitely hurts us when we struggle to score and you lose your leader in points per game, it makes it doubly hard,” Mifflin County coach Scott Gaffey. “I thought early on we handled the pressure a little bit, got some good shots. We missed a ton of foul shots and we missed a bunch of easy shots early in the game. Credit to them. They played hard, they played good defense, they sped us up, and they shot the ball well.”

In a strange twist, Panther coach Don Ross apparently lost his job early in the day and former Tampa Bay Buccaneers linebacker Danny Lansanah took over as coach. Not a bad debut to say the least.

“I played for the Buccaneers, so I’m used to stepping in and making things right. It really wasn’t a surprise. Coach Don Ross molded me in the coaching aspect, so once it went down it was easy for me to step in and make it happen,” Lansanah said.

CD East took control of the game early with an 8-2 run at the end of the first to take a 16-6 lead. Shawn Lewis led the Panthers (5-4, 4-3) with eight points. Jace Shoemaker had four of his eight points in the quarter to lead the Huskies. Shoemaker and Xavier Vega paced Mifflin County with eight points each.

It was more of the same in the second quarter with the Panthers erupting on a 14-2 run led by Jones and his seven points. When the dust settled, CD East won the quarter 19-5 to take a commanding 35-11 lead into the half.

Jackson went off in the third with four 3-pointers during a 16-2 run as CD East won the third frame 28-9 to own a 63-20 lead heading into the final eight minutes. The Panthers channeled their inner Houston Rockets with six treys in the third quarter.

“We focused on rebounding a lot. We were on a four-game skid and we were getting out-rebounded by teams. With the threes, a lot of our guys were knocking them down and hopefully, it will take off from here for us,” Lansanah.

Lansanah brought in the reserves and won the fourth 21-17. Tyler Metz had five in the quarter for Mifflin County.

“We have to get a little better of using all 32 minutes of the game. Let’s face it, we can’t mimic the pressure in practice that we see in games, so for us, this is a chance for us to get better,” Gaffey said. “I was proud of our kids for not giving up and playing hard. High school sports is about a lot. It’s about teaching kids life lessons and more important things than just basketball.”

Gaffey admitted that Cherry will miss the whole week – bad news for a struggling team that has three more games left in said week.

“Connor gives us some rebounding around the rim and we struggled in that department tonight. He’s a good finisher around the basket and he gives us another added scoring punch and rebounder that we sorely missed tonight,” Gaffey said.

Did not score: Quinton Hepner.