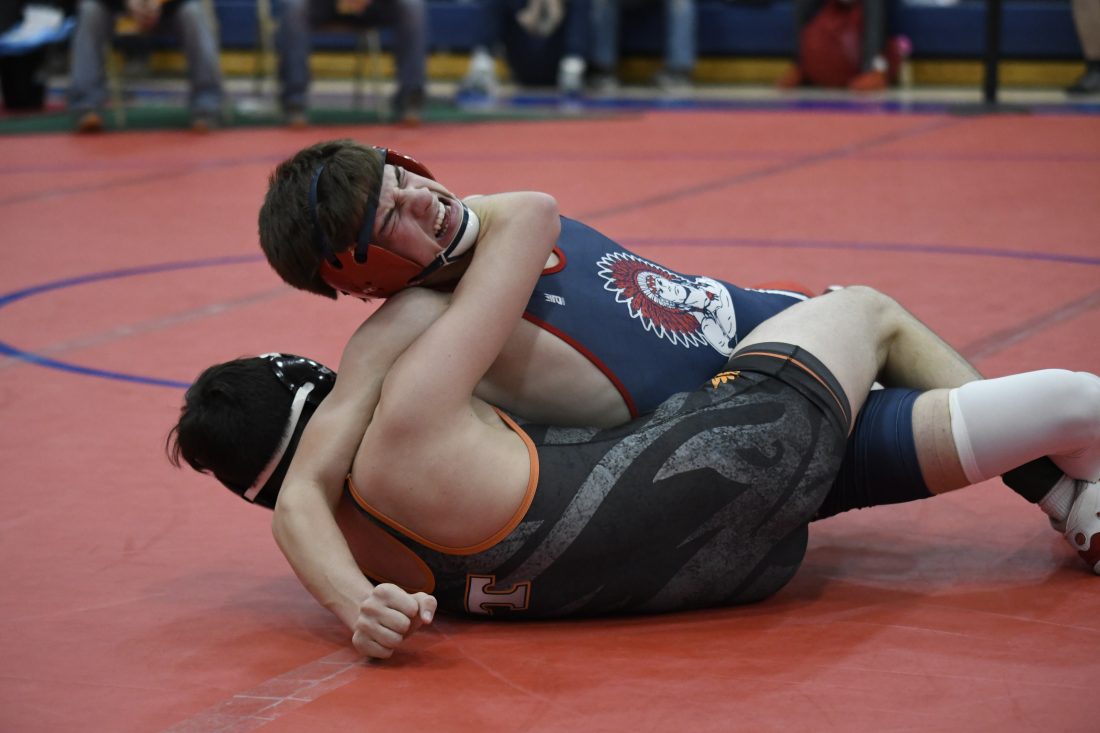 Sentinel photo by JEFF FISHBEIN
Juniata’s Josh Bomberger gets the reversal with a Peterson on his way to a fall over Dom Maloney of Tyrone on Friday at the Ultimate Warrior Tournament in Allport.

ALLPORT — Nine area grapplers advanced to the semifinals during Day 1 of the Ultimate Warrior Tournament at West Branch High School on Friday.

Mifflin County put six in the semifinals and Mount Union had three move through into the championship bracket. Juniata did not have a semifinalist.

A more physical and aggressive Allison moved a step closer to repeating as Ultimate Warrior champion with a fall in 2:30 over Toren Cooper of Southern Columbia and a pin in 3:09 over Tristyn Keefer of Shippensburg in the quarters. Allison faces Korry Wells of Tyrone this morning at 9 a.m.

“I was pretty successful today. I went into these matches wanting takedowns and had some decent throws as well. I had a few different moves today. You have to be good in every position if you want to be a successful wrestler here,” Allison said. “The kids that I wrestled as a freshman who were familiar with me knew what was coming, so it made it harder. This year, I’ve been working on new stuff, I’m stronger and quicker and I’m more comfortable this year.”

Burk advanced with a 12-1 major decision over Jake Barr (Moshannon Valley) and a tough 3-2 decision over Shippensburg’s Jeff Russell. The Husky senior meets top seed Kole Biscoe of Southern Columbia in the semifinals.

Kauffman scored a takedown with two seconds left in regulation to defeat Richland’s Allen Mangus in the quarterfinals. The Husky senior stopped Gary Emerick of Ridgway 7-2 in the round of 16. He gets top seed Zack Witmer (St. Joseph’s Catholic) in the semifinals.

Kibe, returning Warrior champion from a year ago, was his dominant self – cruising to the semis with a pin in 45 seconds over Diesel Koser (Shippensburg) and a 1:43 clamping of Isaac Zimmerman of Johnsonburg. Kibe meets third seed Cade Linn of Southern Columbia.

“When I went out there (quarterfinals) he (Zimmerman) was being a little passive…kind of stalling a little bit. I had to create ways to score and I got him with a snap down I’ve been working on,” Kibe said. “It was a pretty good day. Tomorrow will be a bigger day and that’s what I’m looking forward to.”

Hassinger reached the semis with a pin in 22 seconds over Wyalusing’s Alex Hunsinger and a 7-3 decision against Corey Boerio of Greater Latrobe. Next up is top seed Alec Snyder of Wilson Area.

Davis disposed of Parker Allen (Tyrone) in 35 seconds and Seth Hess (Shippensburg) in 1:17. The Husky senior tangles with second seed Marvin Beatty of Marion Center in the semifinals.

Mount Union’s Beatty opened with a fall in 1:29 over Jordan Carlucci of Altoona before gaining a 5-1 win over Marion Center’s Liam Cornetto. Beatty, the second seed, faces third seed Mark Palmer of Brockway.

Morehouse reached the semifinals with a 6-1 victory over Lucas Sheetz of Mifflin County and a fall in 1:12 over Lucas Laktash of Bradford in the quarters.

Ryan looked smooth and comfortable at 220 with quick falls in 21 seconds over Ryan Boose of Altoona and a 1:03 over Blairsville’s Gabriel Kennedy-Citeroni. Ryan, the top seed and returning champion, takes on David Close of Bald Eagle Area in the semifinals.

“I feel faster. I feel healthier. I think I look good and when you look good, you feel good and you wrestle good,” Ryan said. “I feel good. After my first match, I took a quick nap, woke up, got some food and was ready to go.”

Clayton Arnold (195) made it through the first day for the Trojans and is still alive in the wrestlebacks.

Still alive for the Indians in the consolations are Cameron Sweigart (120), Daniel Painter (126) and Chase Willis (182). They all lost their round of 16 match but survived through the first day of competition.

“We’re young and this is a learning experience for us. We had some matches we should have won but our inexperience hurt us in places,” Juniata co-coach Adam Barrick said. “We have a lot of freshman and sophomores and this is a good tournament that will help these guys down the road.”

Mifflin County leads the pack after day one with 108.5 points, a half a point ahead of Southern Columbia.

“We’re doing well. Almost every guy is still going. We have to pick it up a notch tomorrow and keep going,” Kibe said.

Medical marijuana seminar to be held

We are all imperfect, and that includes Politifact