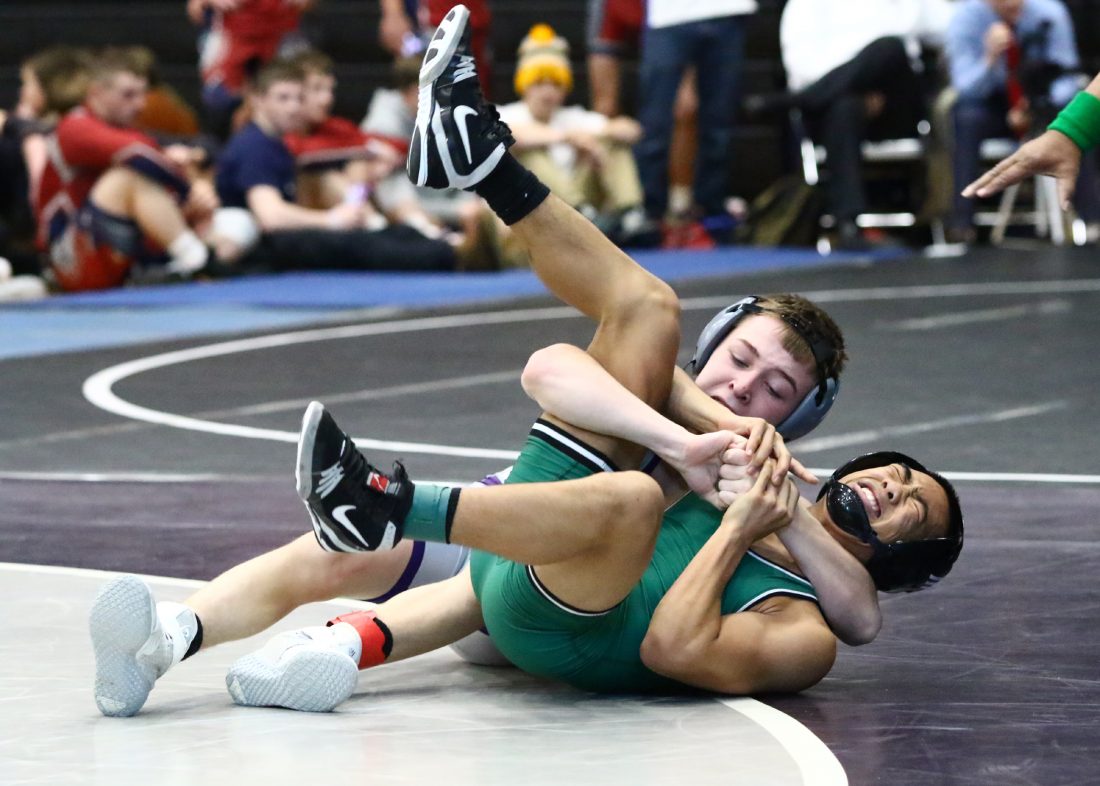 Sentinel photo by MATT STRICKER
Mifflin County's Nic Allison, top, locks up a cradle for back points on the way to a 14-3 win over Carlisle's Taylor Hebenstriet at 106 lbs. Saturday in Lewistown.

LEWISTOWN–Mifflin County put on a dominant display of wrestling at its own Husky Duals on Saturday.

The Huskies breezed through the competition, including a 49-15 victory over New Oxford in the finals for their second straight championship after a five-year hiatus of the Duals.

Mifflin Count went 30-12 in bouts with 22 wins of the bonus variety. The Huskies (8-0) beat Carlisle 44-21 in the quarterfinals, Philipsburg-Osceola 60-15 in the semifinals and the Colonials in the finals – outscoring their opponents 153-51.

The Huskies improved to 3-0 in the Mid-Penn Commonwealth with the victory over the Thundering Herd.

“Three wins and all very convincing. There were some individual matchups today I’m very proud of how we wrestled the tough kids,” Mifflin County coach Kirby Martin said. “There wasn’t anybody that went out there and didn’t go hard. We continue to ask these kids to give everything they’ve got. Our motto is Husky tough and so far, that’s what we’re getting out of our kids.”

In the finals, the Huskies broke open a 9-9 tie with New Oxford, reeling off eight straight victories to blow the meet open at 49-9.

Wagner started the win streak with a fall in 56 seconds over Lane Nitchman at 152. Shoemaker followed with a pin over Hunter Shaffer in 3:23. At 170, Kibe built up a 7-0 lead before flattening Dominick Grieco in 2:46 to make it 27-9. The Husky junior ranked No. 1 in the state, won all his matches by fall.

“The first match I wish I had it later in the day. My first match is always a bit slower. The next two, my second match, I saw the opening for the cradle, stuck with it and got the six,” Wagner said. “The last match was okay. I’m more comfortable and confident out there. I have more strength and my training partners are excellent. I’m much better this year. Our team is much better this year and we’re going to go far this season.”

Mifflin County kept the momentum going when Hassinger downed Dylan Forbes 12-9 in a battle of state-ranked wrestlers at 182. The Husky junior had two takedowns in the first, a reversal and two nearfall points in the second to build a 10-5 lead before fighting off a late charge by Forbes for the victory.

At 195, Krepps majored Isaac Byers 15-3 with two takedowns, a reversal and eight back points. Crum broke a 3-3 tie with an escape in the third to beat Dylan Smith.

Mifflin County closed out the win streak with back-to-back falls by Davis and Allison.

Davis took out Josh Getz in 30 seconds of their heavyweight bout. Not to be out done, Allison decked Trent Uhler in 10 seconds at 106.

“We emphasize that before every dual meet. If you have a chance get a pin. We have some kids their job is to keep it to a regular decision and we had those situations today – kids keeping matches to regular decisions instead of giving up bonus points,” Martin said.

The Huskies got a huge win early in the match when Sheetz, down 4-1, reversed Jacob Pope to his back in the second and recorded the fall in 2:34.

“It’s a mindset and we keep trying to remind the underclassmen that you’re never out of a match if you continue to grind away,” Martin said. “That was definitely the case in the last match for him. He never stopped wrestling. I hope wins like that keep coming his way to build his confidence.”

Big wins were the rule of thumb on the day – the main one being Kauffman and his 4-2 victory over state qualifier Chase Chapman of P-O.

The only bad news for the Huskies was Johnson re-injuring his shoulder after getting back into the lineup recently.

“Unfortunately, it’s probably going to be something that will continue to be nagging. Hopefully, it’s nothing serious and he can get some mat time in,” Martin said. “It stinks because you want to put out all the quality kids you can each match.”

“We worked a lot on chain wrestling off the bottom and we are doing a much better job with that. I’m still not happy with where we are on our feet. Our hands are busy, but not busy enough and we still aren’t attacking at a high enough pace,” Martin said. “I want to see us continue to get better and we’ll work on it. There are always a lot of little things to work on, but the kids wrestled great today. I’m proud of them. We have to keep grinding away.”