Wildcats fall short to Wyoming Seminary in Class A semifinals

DANVILLE — In the battle between the last two PIAA Class A field hockey state champions, it was current defender Wyoming Seminary that came away with a 4-2 win in Tuesday’s semifinal clash with Greenwood.

The Blue Knights’ opportunistic offense and swarming defense propelled the reigning champions to a spot in the finals and a chance to defend their crown.

The two teams played each other tough, using the past two seasons to prepare for Tuesday’s matchup. Early on, play hovered around midfield with neither side able to keep the ball in the opposition’s territory. Greenwood was able to earn multiple corners in the first few minutes but did not capitalize on its chances.

The game remained scoreless until the 17-minute mark when the Blue Knights struck their first blow. Wyoming Seminary scored on its third consecutive corner as Ella Barbacci fired a long shot which got past goalie Kelsey Sheaffer, giving Seminary a 1-0 lead.

Greenwood responded a few minutes later to tie the score. On a second consecutive corner, Leah Bryner made a great pass to Kenedy Stroup who was wide open and fired a shot past Wyoming Seminary’s goalie Mia Magnotta.

The Blue Knights added a second goal courtesy of Hannah Maxwell with just five minutes left in the first half, halting any momentum Greenwood was looking to build on.

Coming out of the break, Wyoming Seminary went on the offensive, looking to add onto its slim lead. Just seven minutes into the second half, the Blue Knights did just that, when Maxwell scored her second goal of the game.

Greenwood scrambled to get back into the game but the Blue Knights’ defense held strong. The Wildcats created opportunities for themselves but struggled to make the most of their chances.

“I thought we did a pretty good job of getting it down there,” coach Kent Houser said. “When we would get the ball across, we’d either miss the ball or foul.”

Four minutes later, the Blue Knights took a 4-1 lead. Maxwell got the ball behind the Wildcats’ defense and beat a defender, prompting Sheaffer to come out of the goal. Maxwell made a crisp pass across the net to an awaiting Emma Watchilla who finished the play for the Blue Knights with a shot into the goal.

Despite being down three goals to another great team, Greenwood refused to quit. The Wildcats worked hard and continued to get corners, but the Blue Knights turned them away each time.

“Our corner game wasn’t sharp” Houser said. “There in the second half when you’re behind, you’ve got to create good corners and we weren’t doing that.”

It took until the 10-minute mark for the Wildcats to get back in the scoring column. Again, it was Stroup who scored for Greenwood, finding the bottom of the goal to cut Wyoming Seminary’s lead in half.

In the home stretch, Greenwood forced a few more corners but was unable to complete the comeback, falling in the semifinal round to the Blue Knights for the second year in a row.

Houser knows that his team gave it their all but did not play their best hockey of the season.

“They outplayed us,” Houser said. “I just thought we really made uncharacteristic mistakes tonight.” 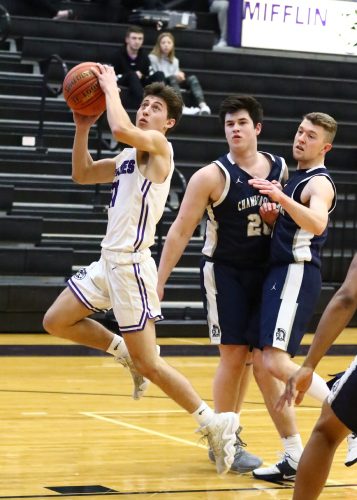 Herd too much for Huskies

LEWISTOWN — An offensive surge in the second half carried Carlisle over Mifflin County, 70-41 in a Mid-Penn ... 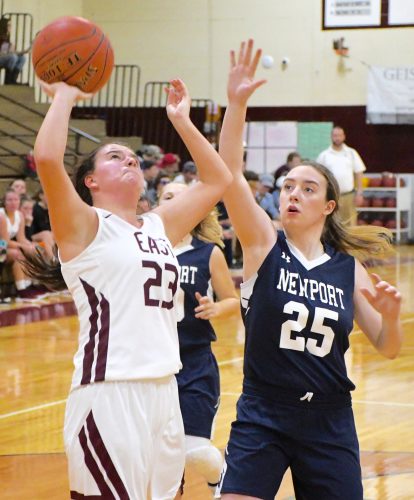