Third time’s the charm for EJ 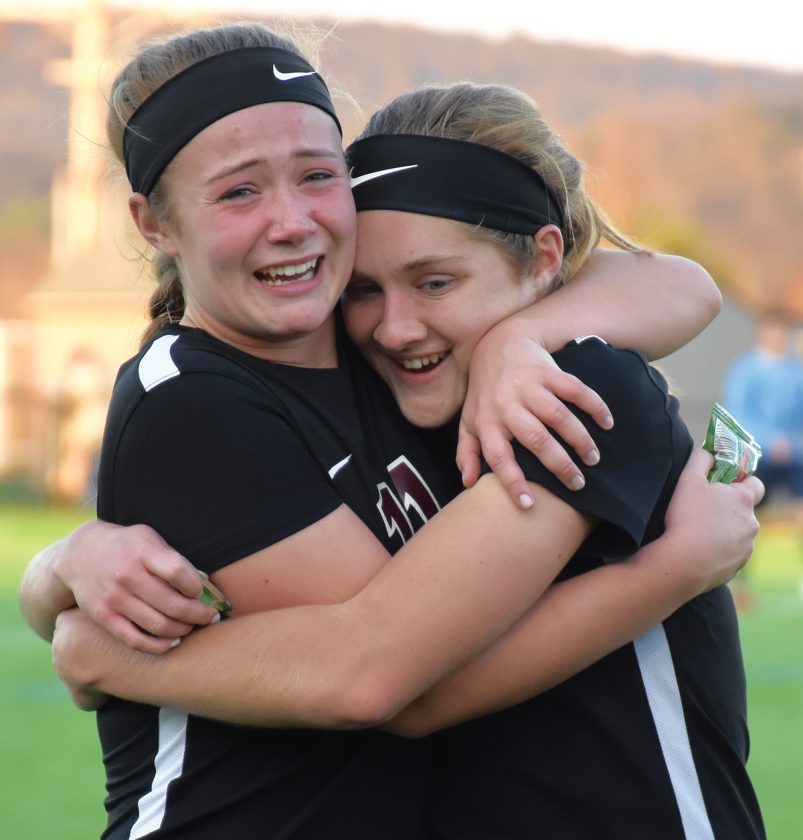 MIDDLEBURG — East Juniata went into its rematch against Bloomsburg with the District 4 Class A girls soccer championship on the line.

The Panthers played incredibly well against a Tiger team that made light work of its opponents in the first two rounds of district play. But it was East Juniata that came out on top of the hard-fought battle, by a score of 1-0.

This is the third straight district title game that East Juniata and coach Val Dressler have been to. They lost two years ago to Bloomsburg and last year to Southern Columbia. So, when the clock hit all zeroes, the emotion poured out from the East Juniata players who finally cleared a hurdle that had been in their way multiple seasons.

It was worth the wait.

“It was. It really was,” Dressler said. “Three long years but they really deserve it.”

Feeding off of the adrenaline, both teams came out fired up, keeping play around midfield. The Tigers’ offense eventually broke into Bloomsburg territory, putting a few shots on goal. But the Panthers’ defense was swarming, making the Tigers settle for shots from long range and uncomfortable shots closer to the net.

The Tigers were up to the challenge defensively as well, limiting Bloomsburg to only a few shots in the first half. East Juniata’s offense was aggressive, choosing to challenge a solid Bloomsburg defense head on. They weren’t afraid to take long shots, especially since goals were going to be hard to come by.

Leah Sankey, Thea Neimond, Cypress Feltman and Kierstyn Fogle each fired off a few shots in the early stages of the game, but none of them were able to put East Juniata on the board.

Around the 14-minute mark, Neimond took a shot from long range that bounced of the crossbar and straight into the air. Bloomsburg’s goalie, Abbey Gerasimoff, kept her head in the play and caught the ball as it came right back down into play.

With under a minute left in the half, the Tigers tried to get on the board when Leah Sankey ripped a shot from long range. Like Neimond’s earlier shot, Sankey’s, too, hit the crossbar. This time, the ball bounced directly down and was cleared by the Panthers. The East Juniata fans believed that the ball crossed the line but the referees did not and the game went into the half a scoreless tie.

Coming out of the break, it was Bloomsburg that turned on the intensity, pushing the ball into East Juniata territory. The Panthers held the ball on the Tigers’ side of the field for a few minutes but could not send it into the net.

For most of the second half, it was the defenses that dominated. Neither team was able to advance the ball forward as time slowly ticked away.

The lone goal of the game came with just 5:34 remaining in the contest. East Juniata’s Neimond received a long pass from Clarye Guyer that gave her a chance to make a play.

Neimond took the ball, squeezed through two Bloomsburg defenders and fired a shot, just as Gerasimoff rushed out to block it. Neimond’s shot found its way around Gerasimoff and into the back of the net.

“I think everything went into slow motion,” Dressler said about Neimond’s goal. “It just came down to Thea’s hard work. I mean, bodying those girls up and getting her shoulder in to protect herself and just working hard. That’s all I saw, someone who all she saw was the goal.”

With limited time, the Panthers knew they had to act quickly if they wanted to tie the score. On the other side, East Juniata was doing everything to prevent Bloomsburg from getting back in the game.

After the ball was cleared by the Tigers on consecutive possessions, the Panthers made one last attempt to send the game into overtime. Kailey Zentner found herself with the ball in a position to score. Her first shot was stopped on a tremendous save by Tiger goalie Brianna Henry, who dove to left as the ball bounced off her body. The rebound found its way back to Zentner, who then sent a pass near the front of the goal, hoping it would find its way in, or that a teammate would finish the job.

The ball sailed past the net and out of play.

There were a few tears from the East Juniata players and fans, all proud of what this team has accomplished this year. Many of their games were one-sided, but to win the district title, they had to come together and play a complete game against a worthy opponent.

“It’s everything that we could have imagined,” Dressler said. “I think that was a great district title game.”