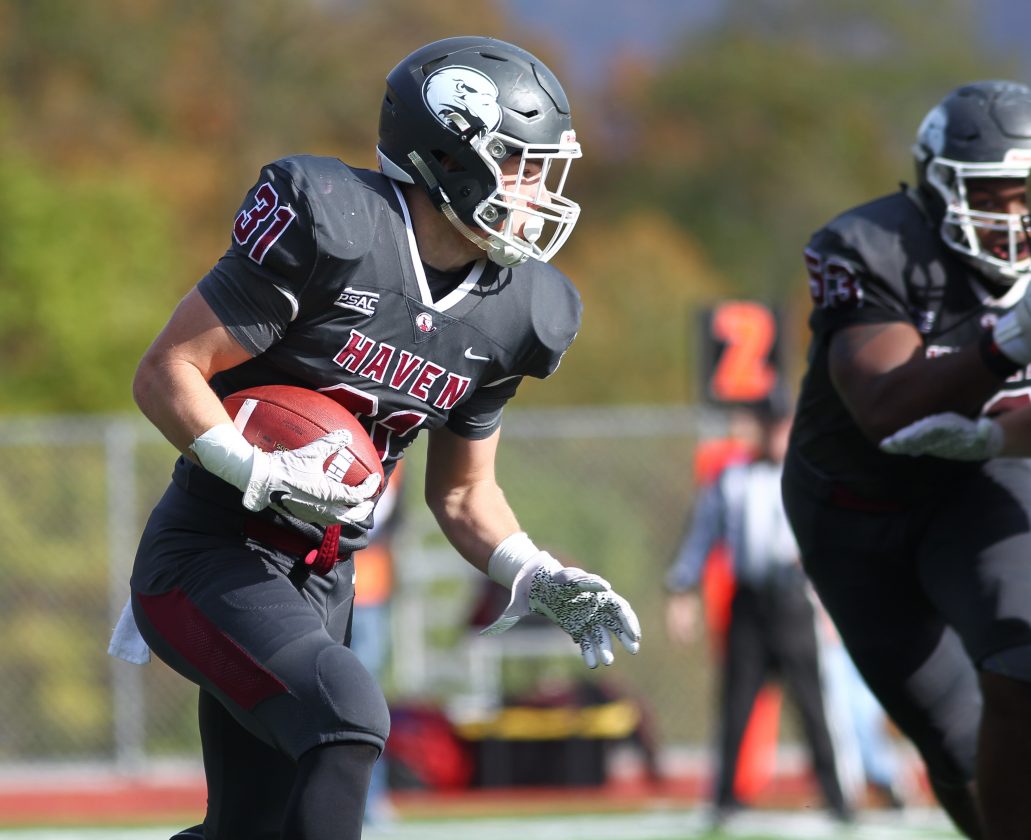 Submitted photo
Lock Haven’s Chantz Swartz emerged as one of the top running backs in the Pennsylvania State Athletic Conference this season, finishing among the league leaders in rushing at Division II Lock Haven. Swartz rushed for 926 yards despite missing two games to injury.

LOCK HAVEN — Chantz Swartz has spent much of his career dodging would-be tacklers on the football field.

The former Juniata High School standout credits his success to hours on the practice fields honing his skills, and even more in the weight room and class room developing both mind and body.

“I’ve always felt like speed was one of my biggest assets,” says Swartz, who just wrapped up his junior season at Division II Lock Haven University. “When I got to college, I saw how the game speed changed (from high school). One cut and you’ve got to go. The decision-making time is way quicker. A lot of times I just lower my shoulder and get what I can.”

Swartz’s 102.9 rushing yards per game led the Pennsylvania State Athletic Conference Eastern Division and finished second overall in the conference during the regular season. Despite missing two games late in the season, he finished with 926 rushing yards in an attempt to become Lock Haven’s first 1,000-yard rusher since 1981.

Swartz also rushed for seven touchdowns and caught another for the Bald Eagles, who struggled through a 2-9 campaign, including an 0-7 mark in the PSAC. He showcased an ability to catch the football as well, finishing the year with nine catches for 89 yards and a score.

Those numbers earned the 6-2, 215-pound back a spot on the All-PSAC East Offensive Second Team this past season, his second All-PSAC honor in as many seasons.

When it comes to accolades, Swartz is the consummate team player and quickly credits teammates and coaches for his success. He brushes off the praise much like he does those would-be tacklers.

“I wouldn’t be where I’m at today without my teammates from high school, junior high and my parents,” Swartz said. “There have been a lot of people who have helped contribute to where I am today. I just want to represent that well.”

However, the words of a coaching legend might just have been enough to stop Swartz in his tracks.

“Every time he got the ball in his hands, he was a threat to go all the way,” said Gary Klingensmith, who coached Swartz at Juniata. “It doesn’t surprise me that he’s doing so well in college now.

“He’s got good speed, he’s tall and can jump,” he adds. “He’s also got amazing hands as a receiver. He can catch the ball as well as anyone I’ve ever seen. He’s just got so much natural talent. He just has it all.”

Swartz graduated as the Indians’ all-time leading rusher with 3,422 yards and 80 touchdowns, marks that might never be broken, according to Klingensmith. As a high school senior, he rushed for nearly half of that total – 1,695 yards. Swartz scored six touchdowns in a single game twice.

From his days playing youth football to this past season at Lock Haven, Swartz’s coaches will tell you he was not always the biggest or fastest running back they’ve seen, but they agree he was the hardest worker – second to none.

“He was undersized as a young kid,” said Scott Clark, who coached Swartz at the youth football and junior high levels. “He used his craft as a young running back to make people miss. Then he became this power runner to knock people over. Yet he still had his breakaway speed. It’s neat to see him develop as a player.”

“He’s like a home-run hitter,” Clark explained. “He’d get the ball and could always make a big play. He was always a hard worker, tough and committed to getting better.”

Swartz has also persevered through trying times. He initially committed to PSAC East Division rival Shippensburg University, but he transferred to Lock Haven after one season.

Swartz has made the most of his opportunities with the Bald Eagles since his arrival in 2017. As a freshman, he played in 10 games and ran for 162 yards. His sophomore year, he led Lock Haven in rushing with 759 yards. He also had 24 receptions for 295 yards.

Four times this season, Swartz topped the 100-yard mark. He gashed Shepherd for 173 yards and two touchdowns on 22 carries. He ripped off 134 yards against Millersville and 135 more against Bloomsburg before ending the season with 125 yards against Gannon. He would have certainly hit the 1,000-yard plateau if he hadn’t missed two games due to a knee injury.

Despite his dedication to football, he has also excelled in the classroom, an accomplishment Clark recognizes.

“I’ve been so impressed with his development academically,” Clark said. “That’s where his future is going to be. He’s worked hard to improve his grades.”

Swartz might have traded some of that hardware for more team success on the field this season.

After winning its opener against Lincoln, Lock Haven dropped nine-straight contests. Swartz returned for the season finale, a 28-27 thriller over Gannon. He ran for 125 yards on 15 carries and put Lock Haven up 20-7 with a 15-yard touchdown run with 1:50 left in the first half.

Gannon rallied in the second half but was thwarted by the Bald Eagles’ defense on a two-point conversion in the game’s final minutes.

“My goals are to rush for 1,000 yards and be consistent all-around,” Swartz says. “I shoot for 10 rushing touchdowns. But I’ll do anything any way I can to help my team win. I’ve made a bunch of great friends and teammates here (at Lock Haven). We’re all playing together, giving it everything we’ve got on Saturday and during the week at practice.”