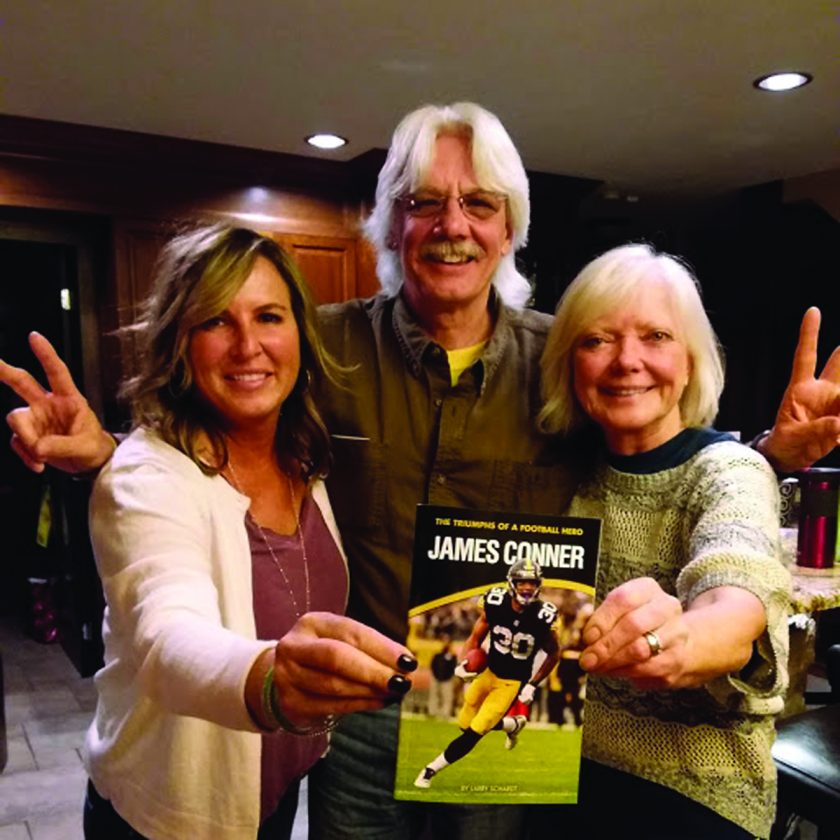 When Schardt was given the opportunity to write a book on a Steelers’ player it was a dream come true.

“I’m originally from Pittsburgh and my mom and dad raised me on the Steelers,” Schardt said. “It’s black and gold all the way. This was a blessing. It was an amazing experience that endeared me to the Steelers even more, and it certainly endeared me to James.”

In his writing career, Schardt has written multiple chapters in the Chicken Soup for the Soul book series. Schardt eventually found that the Greater Lehigh Valley Writers Group wanted someone to write a book about the Steelers. He initially applied for the job and found out that the book would be a biography on James Conner. The book was published by Lake 7 Creative on Sept. 10th.

The match couldn’t have been more perfect for Schardt, who has traveled the country giving motivational speeches and lectures. Conner’s journey through high school football, his victory over cancer and journey to the NFL are chronicled in Schardt’s book.

Conner started his high school career in Erie as a defensive end, before switching to running back and breaking multiple records on his way to playing college football at the University of Pittsburgh. He was drafted in the third round of the 2017 NFL Draft by his hometown Steelers.

Schardt’s book was the first book other than a textbook for a class he teaches at Penn State that he has written from cover to cover. Writing his first book was a challenge in and of itself, especially given a short deadline.

“It was a great experience,” Schardt said. “I signed the contract on February 14th, and I had to have the first draft to them by April 15th. I didn’t realize that to do all of the research and everything — I lived and died James Conner at that time. Other than my class I teach at Penn State, it was the only thing I did. It was pedal to the metal and a great learning experience.”

Schardt’s favorite part of the book included learning about the perseverance and character of Conner in his battle against cancer.

“My favorite part was just the determination, the kindness and the humility of James Conner,” Schardt said. “He overcame cancer and went right from chemotherapy straight to practice. How much more determined can you get? What a role model. His kindness and humility are exemplary.”

Schardt has received a lot of local support from the community with his book, something that he is very grateful for.

“I have received a lot of support and people have been very kind,” Schardt said. “I was in the Crooked Shelf Bookshop the other day where I will be doing a book signing and a woman came in looking to buy two copies of my book. It was an amazingly beautiful experience.”

The book has received some high praise as it was ranked as one of the 24 best sports biographies of all time by BookAuthority.

“That totally blew me away,” Schardt said. “It was just a shocker. Putting it out right now, it’s the perfect gift for a Steelers fan or any football fan. James’ story is motivational for anyone and it’s great to experience that motivation, humility, kindness. I hope that it is a big inspiration.”

Schardt’s book is available for purchase at bookstores and gift shops across Pennsylvania, as well as many popular online retailers.