Title to Kish in debut 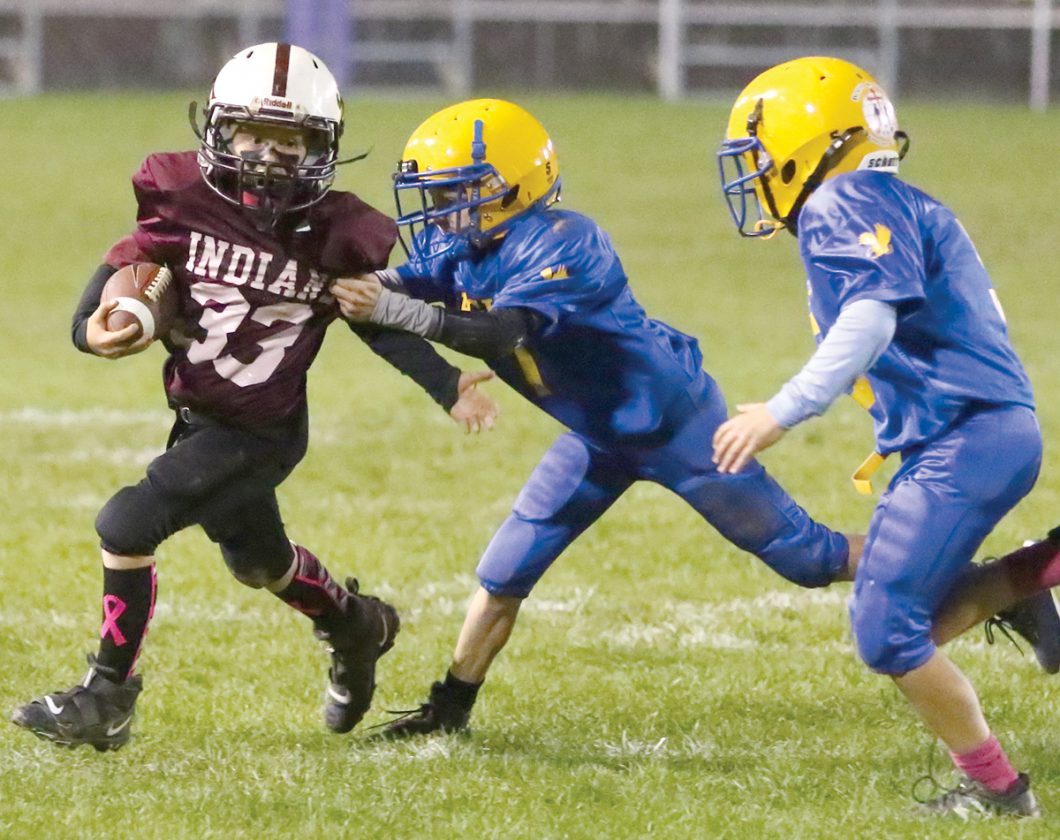 LEWISTOWN — What a debut.

In its first year of playing under the banner of the Central Keystone Football and Cheer League, the Kish peewee football team captured the championship Saturday against a very tough McVeytown team, posting a a 41-14 victory.

“I am super proud of how they played tonight. Since the beginning of the season they fought. I wouldn’t take any other 27 kids,” Kish coach Eddie Rhodes said. “Every week we work on the offensive line. That’s most important for kids this age is that they get the good fundamentals of coaching to be an offensive lineman. “

The offensive line did its job as it opened holes for running backs like Jaxson Strohecker and Darius Crawford, who spearheaded the Indians’ ground game.

Strohecker finished with more than 200 yards rushing while Crawford had one of his teams biggest runs, breaking free to a 70-yard touchdown run.

McVeytown was led offensively by Bo Benny and Cullen Busch.

Busch had his team’s biggest run from scrimmage, breaking loose on a 60-yard end around for an Eagles TD.

Benny was the workhorse busting his way through for a 50-yard night on the ground.

“I told the kids afterward that there were four other teams that didn’t get a chance to play in the Super Bowl. Second place wasn’t what we were striving for but it’s better than third, fourth, fifth or sixth,” McVeytown Coach Dustin Benny said. “So all in all it was a good season for us.”

McVeytown started with the ball but was forced to a three-and-out.

Kish wasted little time getting on the board, scoring a touchdown on its first touch from scrimmage.

Strohecker blazed his way to a 35-yard touchdown run, making it 6-0.

The Eagles marched down the field on its second possession but when they got down to the Indians’ 19 the drive stalled there.

Kish held McVeytown on a fourth-and-6 on the Indian 24, getting the ball back to its offense.

With the ball on his own 30, Crawford blazed his way downfield for the 70-yard touchdown run. With a successful 2-point conversion, Kish upped its lead to 14-0 with time running out in the first.

The Kish defense was a force to be reckoned with as it held McVeytown once again — this time the Indians got the ball at midfield.

This time it took two plays to score.

The McVeytown defense held tough , forcing the Kish offense to go on a 10-play drive.

On first and goal from the four, Zook called his own number and put his team up 27-0.

However, the Eagles would not go down without a fight as they battled back by scoring 14 unanswered points.

Trailing by 27, McVeytown quickly scored on a Busch 60-yard end around for the touchdown. They also converted the 2-point conversion, cutting it to 27-8.

McVeytown’s defense held Kish on the Indians next drive, putting the ball back in their offenses hands.

With just 11 seconds left in the half, Busch hit Gatlin Kauffman on a 35-yard TD pass, cutting the Indians’ lead to just two touchdowns at 27-13.

But the 11 seconds was enough time for the explosive Kish offense. On second down and just six seconds left, Strohecker broke loose and scored on a 46-yard TD to end the half giving his team a 34-14 advantage.

In the second half, Kish got a touchdown from Kade Fisher, ending the scoring at 41-14.

The Kish defense held the rest of the way, giving the Indians Super Bowl victory.