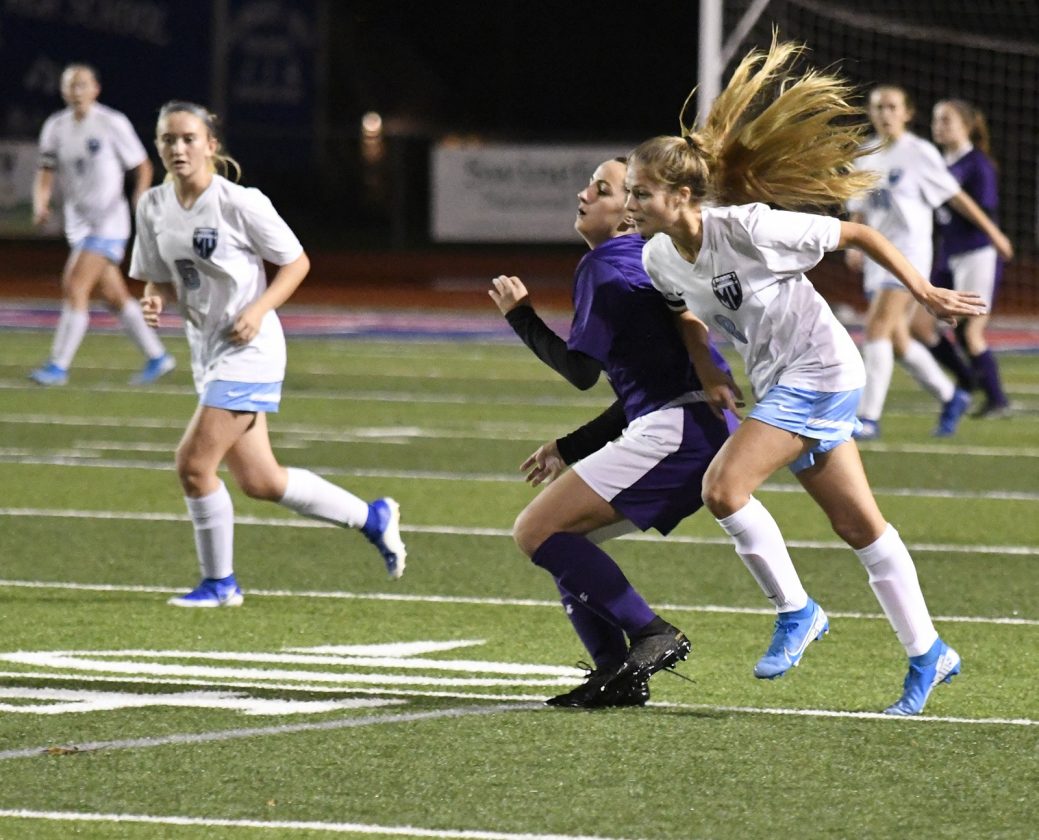 Sentinel photo by JEFF FISHBEIN
Shamokin's Emma Tomcavage, center, reacts as Midd-West's Erin Tompkins heads a ball past her during a District 4 Class 2A girls first-round soccer game Tuesday in Selinsgrove. Midd-West's Rylee Shawver (5) is alongside the play.

SELINSGROVE — Coming out of a first half in which Midd-West scored every other goal, the push after the break was to invest in an insurance policy.

Naturally, the Mustangs turned to the one player who had made the biggest impact in the first half: Erin Tompkins.

Midd-West was in good hands. She cashed in in the 46th minute of play to cement a 4-2 victory for the Snyder County team in a District 4 Class 2A first-round girls soccer game at Selinsgrove’s Harold L. Bolig Memorial Field.

The halftime pep talk, Midd-West coach Andrew Zechman said, was pretty basic — find success in the midfield and it will be reflected on the scoreboard. And he was right.

“We tried to shore some things up and then we actually did a little better linking through the midfield and trying to find our forward,” he said. “That’s how we got the insurance goal in the second half.”

And it really was a game of hide and seek in front of the goal. Tompkins got a foot on it in traffic and buried the game’s final goal.

“When Erin wants to go after the ball and go past the defender, when she has the mindset to do it, she’s tough to beat,” Zechman said. “She’s done well for this team for four years. She picked us up and put us on her back like I expected her to do and got us through it.”

Tompkins became the only option after the Mustangs lost speedy forward Arianna Rich to an injury in the last game of the regular season. Her pairing with Rylee Shawver proved fatal for the Indians; Shawver had one goal and added an assist.

The Mustangs also got a supporting role worthy of an Oscar from freshman goalie Rylee Weaver, who made her debut midway through the season when Midd-West traveled to Central Columbia — coincidentally, the top seed in this bracket and the Mustangs’ next opponent. Weaver made gutsy — perhaps terrifying — moves well outside the comfort zone of most goalies, and Shamokin was stymied by her game.

“She’s young — there’s a learning curve there — but she’s been solid and picked it up down the stretch,” Zechman said. “This is her first playoff game ever — she stepped in there and she did a solid job for us.”

Shamokin was no picnic for the Mustangs this season, either. Midd-West held a 3-0 lead on the Indians in their first meeting, but the Indians came back and tied it up. The teams traded leads in a loss for Midd-West later.

“We knew they could attack. We knew that going toe to toe with them could be dangerous,” Zechman said. “They are very dangerous on free kicks and we knew that. That’s how they scored in the first half. And they finished on us.”

The game was barely a minute old when Tompkins scored first, on a free kick. Her second, on a delivery from Shawver that she was able to tip over the head of Shamokin goalie Olivia Haupt.

In between those two, Shamokin’s Sadie Komara picked up a free kick drilled by Kaitlyn Dunn. Those two teamed up again after the second Midd-West goal — this time a breakaway — to make the score even with seven minutes left in the first half.

Not two minutes later, Tompkins passed the ball to Shawver in front of the goal for a go-ahead score that eventually stood as the game winner.