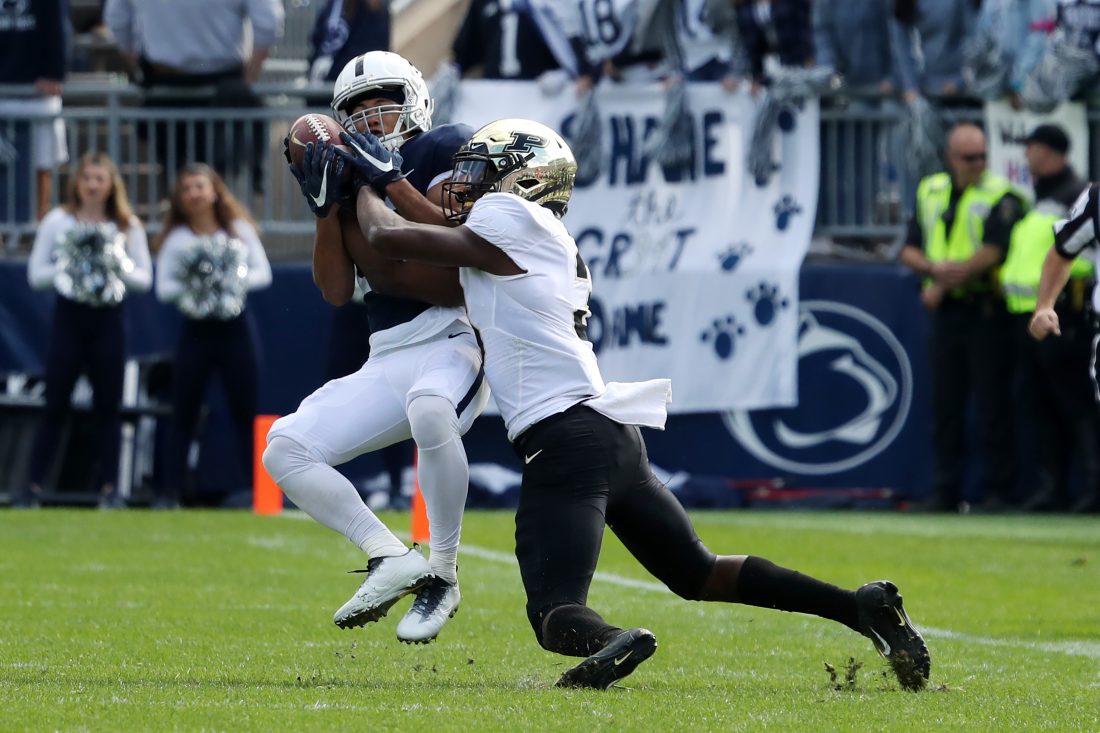 Sentinel photo by Christopher Shannon
PSU’s John Reid breaks up a pass intended for Purdue’s David Bell during the Lions’ 35-7 victory on Saturday at Beaver Stadium.

UNIVERSITY PARK — Something odd happened during Penn State’s expected rout of Purdue on Saturday, and it’s tough to pinpoint exactly what was going on.

The Nittany Lions exploded out to a 28-0 lead with 14:17 still remaining in the first half. Coming off a 59-0 annihilation at Maryland, this game had the look of another ridiculous final score — like 65-7 or something.

Penn State, which came in averaging 50 points, scored only seven more over the game’s final 44 minutes and posted a 35-7 victory before 106,536 fans on homecoming at Beaver Stadium.

But given the Nittany Lions’ remarkable start in building the quick 28-0 lead compared to how poor the offense looked for the next 2 ¢ quarters, it led to a postgame setting that saw coach James Franklin and the players talking about the need to be more consistent.

“That’s what’s mandatory to being great is just consistency,” receiver KJ Hamler said. “I think in the second half we kind of fell off a little bit, kind of got too relaxed. We’ve just got to get better at that.”

Penn State roared out to the early 28-0 lead thanks to quarterback Sean Clifford slicing up Purdue’s pass defense, which has struggled all year.

“We came out and really started very similar to the way we ended last week,” Franklin said, referring to the blowout at Maryland.

After that, however, the Lions went cold and didn’t score again until Noah Cain’s 2-yard TD run with 5:44 left to play.

Penn State muffed a punt late in the first half, costing it a chance at a late score. One may have assumed the offense would come out like gangbusters in the second half — which PSU often has done — but that just wasn’t the case.

The Lions went three-and-out on the first series of the second half. They converted a fourth-and-1 to keep their next drive going, but failed to get another first down.

The usually aggressive playcalling changed, as well, over the next few series. The Lions stopped looking downfield as much, Clifford was making shorter throws that didn’t net much yardage, and there appeared to be a concerted effort to get the running game going, which didn’t work.

Penn State was so good at Maryland, with 59 points and more than 600 yards, and so good early Saturday that it may have created an expectation that the offense was unstoppable.

Clifford made an interesting point about one possible reason for the mid-game struggles. When it was 28-0, Clifford threw a deep pass to Hamler that was picked off.

“It’s weird because we jump out like that and everybody’s so excited and everything,” Clifford said. “Then we had one drive where we didn’t score that time, and I don’t know if it’s just because we expect to every single time, but we just came off and we need to change our mentality.”

The Lions had every reason to be extremely confident, but the quarterback was alluding to the possibility that getting stopped one time may have created some doubt or a different mindset in some players.

“We stalled out in the third quarter, and that’s unacceptable,” Clifford said.

Clifford also offered up some interesting insight about what he did after the game.

“We have Carl Ohlson in our program who deals with the mental side of things,” Clifford said of the assistant AD for performance psychology. “I already talked to him. That was the first thing I did when I went in the locker room was found him, talked to him a little bit about how we can grow. So I’m going to be in his ear all week.”

“Because we’re going to hit adversity the rest of the season,” Clifford said. “Like, something is going to happen in every game. It’s how you bounce back, how you respond, that’s what makes teams great, and that’s where we can take that next step.”

One theory about what happened to the offense in the middle of the game was that Penn State’s defense was so dominant — holding Purdue to 104 total yards — that the Lions knew they didn’t have to score anymore points and were just running out the clock with conservative playcalling.

Clifford said that was never his thought process and added his goal is “to score every drive.”

Ultimately, the quarterback concluded Penn State’s offense was handed a bit of a reality check and that it can learn from the mid-game struggles.

“Yes, that was definitely good for us,” he said. “I think it was good that we jumped out ahead, obviously. I didn’t have any other plan. But it was good kind of that we got punched in the mouth a little bit.”

Clifford finished 20-of-29 for 264 yards, three TDs and one interception.

The Lions’ running game had issues most of the day, but Noah Cain finished strong and tallied 105 yards on 12 carries. Franklin said the four-man rotation will continue at running back but also noted Cain may have taken a step forward to be considered for the top spot on the depth chart.

Penn State sacked Purdue 10 times, one shy of the school record, and made life miserable for quarterback Jack Plummer, who has taken over for injured starter Elijah Sindelar. The Boilermakers had no running game and, because of all the sacks, finished with minus-19 yards rushing.

Clearly, there have been no issues on the defensive side of the ball so far for PSU.

Special teams had a rough day with a missed field goal, a muffed punt and even Jordan Stout struggling on kickoffs.

Offensive lineman Steven Gonzalez was asked after the game if Penn State is elite, and he responded, “I’d say we are elite.”

But even in a 35-7 win, the Lions didn’t look that way for most of Saturday’s game.

“At this level that’s what it’s about, it’s about consistency,” Franklin said. “You have players who can do it from time to time, but the great programs and great players can do it consistently.”

Penn State 7, Purdue 0: The Lions moved downfield quickly on their first possession, highlighted by a nifty 15-yard keeper from Sean Clifford after a fake handoff. Clifford hit Daniel George for 9 yards to convert a third-and-8 at the Purdue 32, then on the next play Clifford hit KJ Hamler for a 23-yard TD with 10:22 left in the first.

Penn State 14, Purdue 0: KJ Hamler returned a punt 26 yards to the Purdue 33 to start PSU’s second possession. Clifford ran for 5 yards and a first down, and a targeting penalty on the play moved the Lions to the 11. On third-and-2 from the 3, Clifford faked a pass, avoided pressure and scrambled into the end zone with 7:04 to go in the quarter.

Penn State 21, Purdue 0: Clifford hit Jahan Dotson over the middle for a nice gain, then the receiver ran around the left side, got some good blocking from Daniel George and raced to a 72-yard TD with 5:20 left in the first.

Penn State 28, Purdue 0: Clifford hit tight end Nick Bowers for a 48-yard gain to the Purdue 9. The Lions appeared to have stalled on a failed third-down pass, but Purdue was flagged for roughing the passer, giving the Lions first-and-goal at the 4. Clifford found tight end Pat Freiermuth for a 7-yard TD with 14:17 to go in the half.

Penn State 28, Purdue 7: Clifford was intercepted by Simeon Smiley on a deep pass to KJ Hamler, who wasn’t expecting the throw. QB Jack Plummer connected with David Bell for a 43-yard gain to the PSU 18. On third down, Plummer hit Amad Anderson for a 15-yard TD with 7:18 to go in the half.

Penn State 35, Purdue 7: Clifford hit Daniel George for 22 yards to jumpstart a drive. Noah Cain finished it off with a 22-yard run to the 2 and then a 2-yard TD with 5:44 remaining.