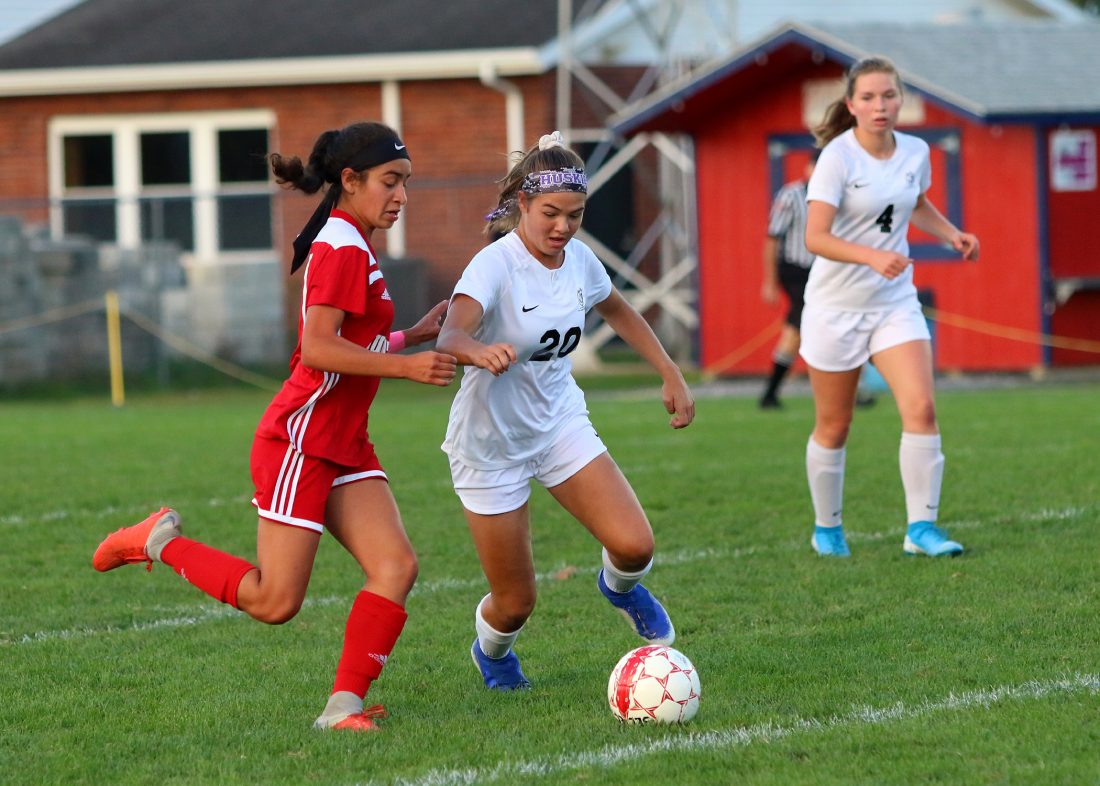 MIFFLINTOWN–Mifflin County is having its most successful season in girls’ soccer and Saturday night against Juniata proved why.

The Huskies bring a never say die attitude into every game. That philosophy paid off when Lily Yoder scored the game-winner 2:03 into overtime leading Mifflin County to the 2-1 nonleague win over a skilled Indian squad in a highly entertaining contest.

“It was an exciting game. Juniata played us tough. We have a lot of injuries right now but that never stops them and that’s what’s great about this team. They don’t give up,” Husky coach Barrett Knepp said. “It was nice to see us not give up there, not to quit on it.”

Indian keeper Hailey Kepner came out of her net for the loose ball in overtime and couldn’t control it. Yoder gained possession and fired it into the back of the net for the golden goal, allowing the Huskies to improve to 6-7-1 on the season.

“I don’t know. The ref didn’t call it so I kept after it and got the goal,” Yoder said. “We played well. The last couple of games we have been really slow. This game, we picked it up and played as one team.”

Yoder led Mifflin County with six shots. Knepp moved her to the outside this season and the decision paid big dividends for the Huskies.

“Lily’s played well for us all year. I like her on the outside. I know she was a little hesitant to go there when I moved her from center-mid, but when we moved her to the outside, she seems to get free into more space and create dangerous chances for us,” Knepp said.

Juniata (11-5) had plenty of chances to score in the game. The Indians, who had 18 shots on goal, had a Victory Frantz shot hit the top of the crossbar early in the first half. Ashlyn and Nylah Pennabaker each had five shots on goal for the home team.

“It stinks because games like that you think about opportunities you missed in regulation we should have capitalized on. We had a lot more opportunities to finish,” Juniata coach Laresa Paden said. “We dominated the ball, a little more, in my opinion, and the girls thought so too. We need to work on our composure and finishing, putting the ball in the back of the net. Somebody has to get hungry and score.”

Both goalies put on stellar performances.

Maddie Finkenbiner, moved from the field because of an injury to starter Bailey McNitt, had 11 saves for the Huskies.

“Maddie is one I knew she could play there. She’s played keeper awhile. She hasn’t worked there for us this year with Bailey coming up,” Knepp said. “I like Maddie on the field; she gives a lot out there. Needing her here (keeper) tonight, she’s done a nice job since we moved her in.”

Kepner, who finished with 10 saves, was just as solid in goal. She stopped an Ella Kammerer penalty kick and made a diving save off a hard strike from Sarah Henry in the first half.

“Hailey played phenomenal. The PK save. She’s been a brick wall for us this year. She’s smart and knows when to come out of the box and when not to,” Paden said. “That one at the end was unfortunate. It was bad timing and the ball bobbled around. It shouldn’t have been a goal but we’ll pick ourselves up, move from here and keep working.”

Mifflin County opened the scoring when Henry got the ball, dribbled it up from midfield and ripped a shot into the right corner for the 1-0 advantage with 6:56 left in the first.

“Juniata is a good team. I knew it wasn’t going to be an easy game. I knew if we played well we could get what we came for, a win, and that’s what we did,” Knepp said. “An area we’ve struggled in lately is getting shots off and creating opportunities, so it was good to see us moving forward tonight and getting opportunities again.”

Juniata answered with a goal 1:07 later when Nylah Pennabaker took the pass from Ashlyn Pennabaker and put it in the back of the net for the 1-1 tie.

Both teams played with emotion and tenacity the rest of the way, setting up the thrilling overtime.

“We looked good tonight, but it definitely could have been better. We need to work on our touches. Toward the end, Mifflin County came fired up, for sure,” Paden said. “We lost our shape a little bit in the back. We’re kind of making some adjustments because we have one of our starting back four off right now because she’s injured. We have a lot of young girls back there we’re trying to shape and work with.”