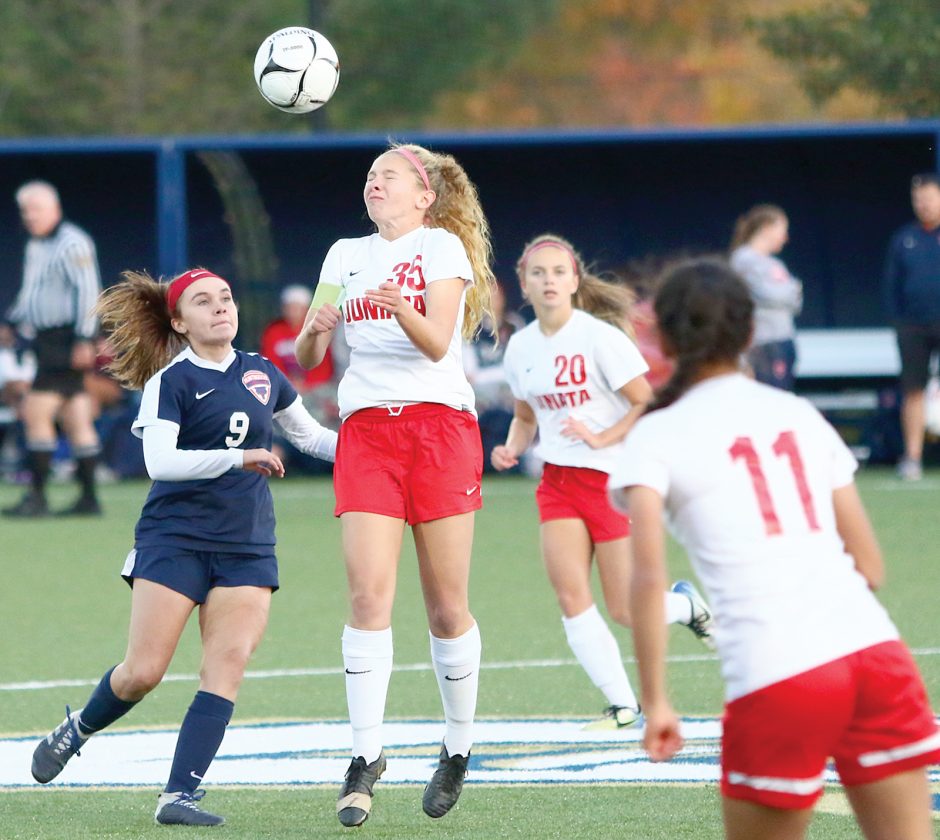 HUNTINGDON — The Juniata girls soccer team scored less than four minutes into the game and that was all it needed in a 3-0 victory over Huntingdon in the quarterfinals of the District 6 Class 2A playoffs Wednesday at Juniata College.

The Indians, seeded fifth, scored all three goals in the first half against the fourth-seeded Bearcats. Juniata advances to the semifinals on Monday against the Bald Eagle Area-Cambria Heights winner at a site and time to be determined. That game will be played today.

“I’m pleased with how we played. Scoring early, especially in a district game, is something that’s important to do,” Juniata coach Laresa Paden said. “We moved the ball well, we moved off the ball well and that was the reason we won. We attacked our space, we played the feet, we played our game. The girls played great. They kept their heads up and gave 100 percent.”

As they’ve done all year long, the Pannebaker sisters got things going for the Indians when Nylah fed a sharp pass to Ashlyn, who ripped a hard shot into the left corner for the first goal of the game just 3:58 in for her 14th goal of the season.

“Ashlyn did really well. She received the pass from her sister and with her speed up top took it in and finished,” Paden said. “She had great composure on a one-on-one chance with the goalie and she placed it great. It was a power shot to the corner and there’s no stopping that.”

Juniata (15-6) made it 2-0 on a Liseth Montoya steal off a lazy Bearcat pass. The Indian senior grabbed possession of the backward pass and shot the ball into the right corner post past the goalie at the 23:25 mark. The tally was Montoya’s 10th of the year.

“She took it from outside the top of the 18 and her speed did the rest. We weren’t sure it was going to go in at first, but it was a back-post shot and there was no getting to that,” Paden said.

Katy Martin staked Juniata to the 3-0 advantage with a score at 8:09 of the first. Martin connected on a hard shot from outside the box into the left corner for the commanding lead at the break. Nylah Pannebaker picked up assist No. 2 of the game on the goal.

The Indians clamped down even harder on the defensive end in the second half, limiting Huntingdon (12-6) to only two shots.

“We did good job on defense. Our back four stayed compact and our outside backs did a good job of staying in the play,” Paden said. “They supported our offense and made us more dangerous up top.”

Juniata kept up the pressure on offense but couldn’t capitalize on their six second-half shots. The Indians owned time of possession in the second 40.

“We need to capitalize more on our shots. As much as we possessed the ball, we should have scored more, but I’m happy with how we moved the ball and we kept great possession,” Paden said. “The biggest thing we need to improve on from here is cleaning up our touches and finish our shots.”

The Indians outshot the Bearcats 13-6 with the corners all even at 5-5. Nylah Pannebaker led Juniata with six shots, while Greta Staley and Sydney Sellers had two shots each for Huntingdon.

Mallory Woodward stopped seven shots for the Bearcats and Hailey Kepner turned aside four for the Indians.