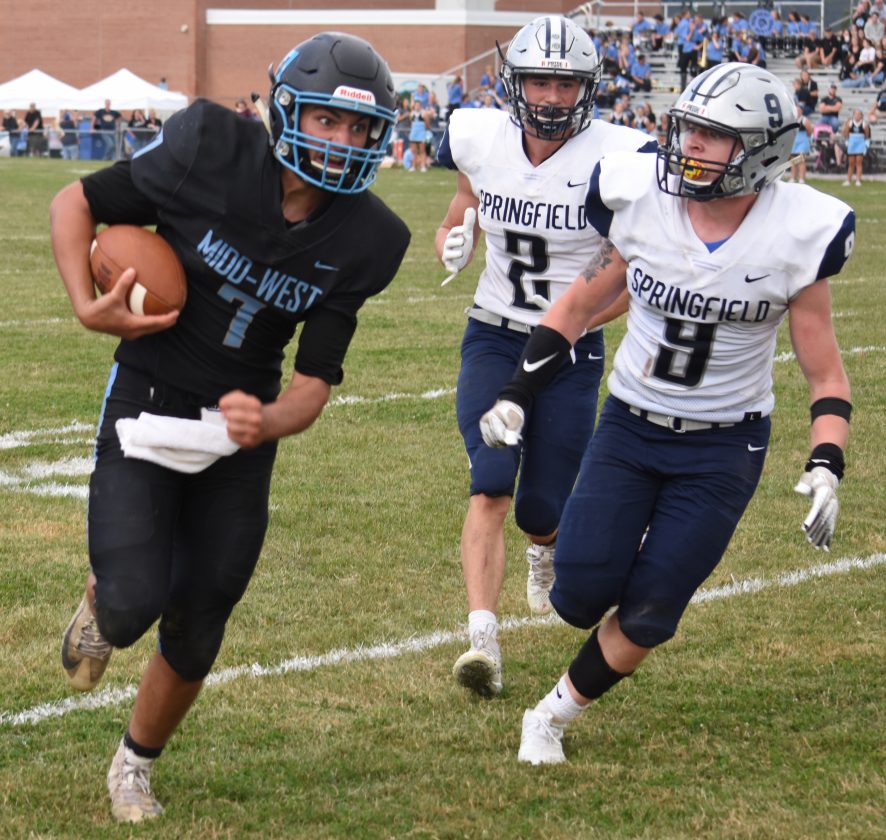 BEAVER SPRINGS – Midd-West football coach Brad Hatter took a gamble, a roll of the dice between victory and defeat, but came out on the short end of a 20-19 contest with Springfield Township on Saturday afternoon.

The Mustangs scored on a 9-play, 56-yard drive when quarterback Oakley Bennett connected with Hunter Wolfley on an out route for the 11-yard touchdown with 6:01 left in regulation.

Instead of kicking the extra point for the tie, Hatter went for two and the potential win. Bennett took the snap from the shotgun and tried to find Gabe Regester or Trey Lauver open on the right side of the end zone. Spartan linebacker Jack O’Malley read the route and stepped in front for the pick and the failed conversion.

Springfield Township (3-0) drove down the field, winding down the clock, to pick up the victory by taking a knee at the Mustang 4-yard line.

“We felt at that point we had momentum and we thought we would get that and maybe it changes their play calling and we could make some stops,” Hatter said. “It’s what we felt we should do and we did it. We have to execute better. They have some athletes and we knew it would be a challenge for us. Credit to them. They made the long trip up here and were ready to play.”

Spartan quarterback Gabe Franczyk was the backbreaker for Midd-West. The junior was 19-of-30 for 201 yards and a touchdown. He was even deadlier on the ground – rushing for 157 yards and two scores.

“We did had some stops, but we didn’t make enough plays, defensively. We couldn’t solve their quarterback,” Hatter said. “They had a good game plan. They ran some misdirection on us. We have to get better playing disciplined football and that starts with me getting them ready to go each week. We have to fix that.”

The Mustangs (1-2) took the early lead when Joe Rodriguez broke through the line, going up the gut for a 30-yard TD scamper. The PAT made it 7-0 with one second left in the first quarter.

Franczyk and Springfield Township got on the board twice in the second quarter to take a 14-7 lead.

The first score was an 8-play, 70-yard drive capped by a one-yard shovel pass to Cam Dennis, who had a monster game with 13 receptions for 115 yards. The key play of the drive was a 4th-and-5 conversion pass that went for 28 yards.

Springfield took the lead when Franczyk broke loose on the quarterback keeper for a 24-yard touchdown with 4:48 left in the half.

Midd-West scored 49 seconds before the half when Wolfely caught the first of his two TD receptions, this one from 16 yards out. The PAT failed and the Mustangs went into the break trailing 14-13.

“We played hard. There was no quit in our team and that is something to build on. We had some adversity, but they kept battling and fighting,” Hatter said. “For us, it comes down to execution and taking care of the ball a little better. It’s all about the fundamentals.”

The Spartans extended the lead to 20-13 when Franczyk started inside, busted it outside and streaked down the left sideline for an 85-yard touchdown run. And from there it came down to the two-point conversion attempt to decide the game.

Bennett was 13-of-18 for 144 yards and two touchdowns, while Wolfely had four catches for 61 yards from his tailback spot to pace the Mustangs offense. Brayden Swineford led the defense with eight tackles, two sacks and a pass deflection that resulted inan interception by Thane Treaster.

“We got some things going in the passing game. Our pass protection has been great for us so far this year,” Hatter said. “We need to make a couple more plays and execute better.”

Midd-West hosts Shenandoah Valley on Friday, September 13 with the kickoff at 7 p.m.