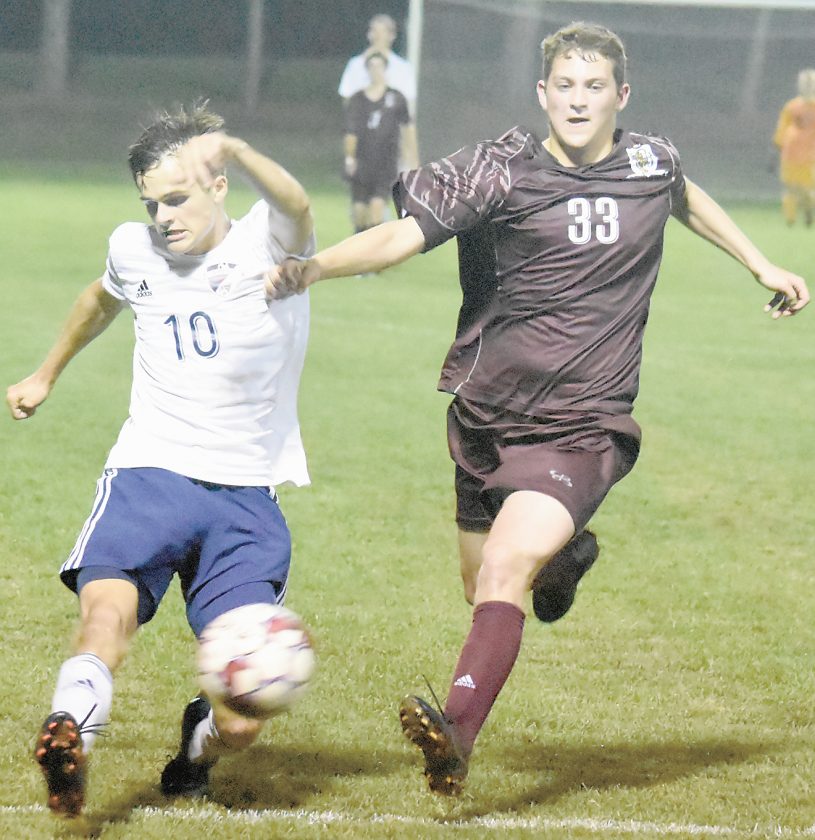 COCOLAMUS — Heading into a schedule that has them playing nine games in 13 days, the Juniata boys soccer team began the stretch against rival East Juniata.

The Indians were hoping to get things started on a positive note. They did just that, surviving a hard fought first half and then dominating the second en route to a 3-0 victory.

Juniata was led by a two-goal evening by Stuart Dare. Dare notched one in the first and one in the second.

Icing things for the Indians was a breakaway goal by Tad Shellenberger with 5:37 remaining in the game.

After a back-and-forth first half, Juniata was able to push the ball back into the Tigers’ back third numerous times and outshot them 17-5 in the second.

Despite the more dominant nature in the second, Juniata coach Jared Byler didn’t have to make many adjustments at the half.

“We just told them to keep playing like they were. Myself and other coaches were thinking to correct or tactical changes but to be honest we didn’t feel we needed to make any,” Byler said. “We likes the cards we were playing. The guys were playing hard and working hard for their teammates. So we really didn’t tell them much at halftime.”

As with most rivalry games, the East Juniata versus Juniata game started in a back-and-forth frenzy in a battle for field position, momentum and tempo.

After the first 10 minutes wound off the clock, the Indians started to stay more on the Tigers’ side of the field.

East Juniata posted the first shot of the game on a bullet by Ethan Roe but it was stopped in its tracks by Juniata goalie Johnny Dessin. Dessin notched seven saves in the game.

To the Tigers’ credit, its defense was cutting off everything the Indians were throwing at them for the first part of the half.

But at 21:23, Juniata’s Dare found a rebound off a previous shot and sent it past East Juniata goalie Andrew Hunter, making it 1-0.

That did not discourage the Tigers as they revved up the intensity in the final part of the half, trying to knot the score.

But the Indians also brought with them a very strong defensive back line to go along with Dessin’s clutch catches.

Juniata outshot East Juniata in the first half by a 6-4 margin. The Indians also held the advantage in corner opportunities 2-1.

“We came into the first half with a lot of intensity. They putting somethings together. I thought they held a majority of the possession that half,” East Juniata Coach Mike Ryan said. “With the goal going in, it kind of knocked the wind out of our sails a little bit. They started losing the large forward guys and tried to do a little too much, too quickly.”

East Juniata opened the second with a quickly blazed ball deep into the Juniata end.

The Tigers were able to get a quick shot off but the ball hit the horizontal bar on the goal, turning them back empty handed.

From there, the Indians seemed to regain its composure and spread out the Tigers’ defense and started to push the ball and pressure the goalie.

At 5:37 left in the contest, Juniata added the insurance goal on Shellenberger’s breakaway.

In JV action, the Indians muscled out a 1-0 victory over the Tigers.