Kahley’s goal in second is difference 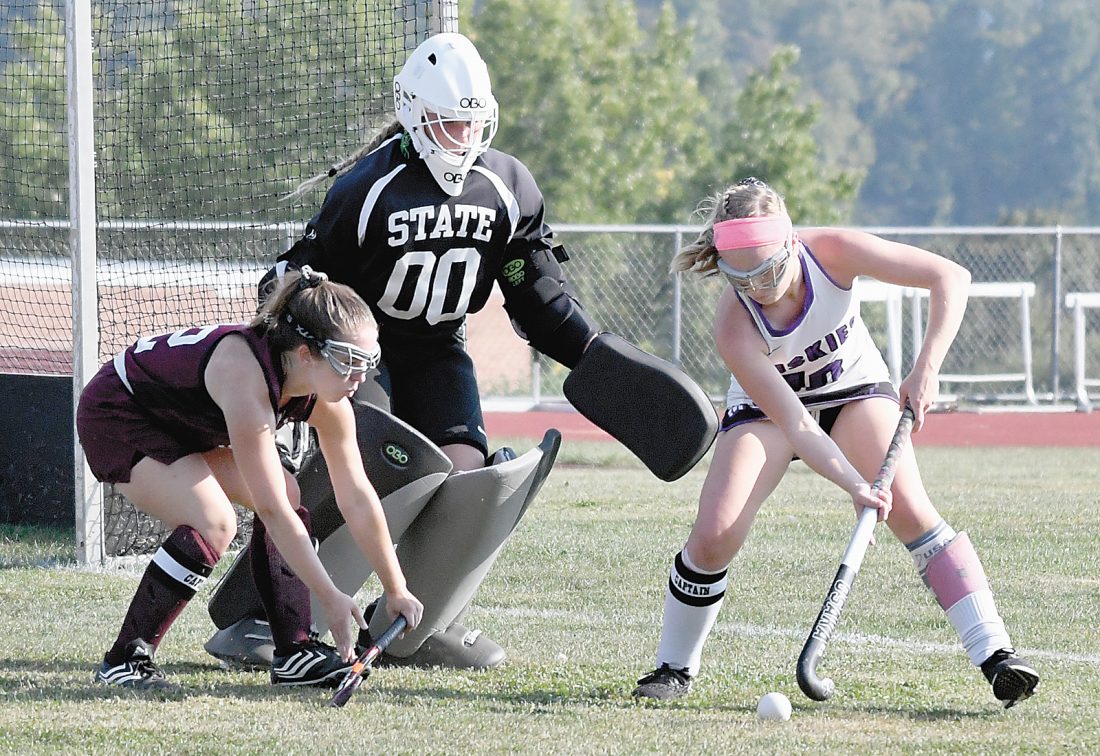 The Huskies (4-1, 2-1) were confident and ready to play against a Little Lion squad that beat them twice last season. The victory also makes Mifflin County eligible for the postseason based on won-loss record within District 6.

“State College is a fabulous team. They are well-coached and skilled. To get a win was important, especially to try and get to districts. It was huge to beat them on our field,” Suydam said. “No question, this is a big win for us. We’re excited, but we aren’t trying to get ahead of ourselves. Today was really important, we wanted to win, we were focused and now we move on to our next game.”

Mifflin County scored just over six minutes into the second half when senior Keni Kahley fought for control of the ball in the circle, drew the keeper out of the cage and lofted the ball into the upper left corner for the unassisted goal at 23:22. Kahley led the Huskies with five shots.

“This is Keni’s first year as a forward. She has a great shot. She’s very tenacious in the circle. She wants to score,” Suydam said. “She pulled the goalie like we wanted her to and she stayed on it and was able to finish. It was the perfect time. We needed it.”

The Huskies fought off a late State College charge in the final three minutes of the contest. All the hustle and effort in the heat didn’t go unnoticed by Suydam.

“We’ve been conditioning a lot because we have to. We don’t have many girls on our bench to sub. We conditioned hard in the preseason, so we were ready for games like this,” Suydam said. “We tried to sub a little more than usual because of the heat. Most of the girls we didn’t have to sub. They were able to stay in. Our girls are in good shape.”

Neither offense was untracked in the first half. The Little Lions (1-3, 0-2) had two shots on goal and the Huskies had four. The only legitimate scoring chance came from Mifflin County on a Kahley breakaway with her shot going wide right at the 19:02 mark.

Lydia Hidlay, Alyssa Lynch and Jordi Attick all had strong games on both sides of the ball. Hidlay finished with three shots, while Lynch and Attick collected two each.

“The girls were excited and psyched up. They’ve meshed so well as a team so far this season. Better than I thought,” Suydam said. “They get each other pumped up and encourage each other and that makes all the difference.”

Despite the solid effort, Suydam saw things her girls need to work on to get even better.

“I was disappointed with our marking in the circle and getting the ball out wide, keeping it from being in the middle so much. Those are two of the things we are going to work on in practice,” Suydam said.

Mifflin County outshot State College 12-5 and won the corners 6-3. Keeper Bayla Furmanek had 10 saves for the Little Lions and Coletta Beeler turned aside five shots for the Huskies.

Is it true that copper can kill a cold virus?