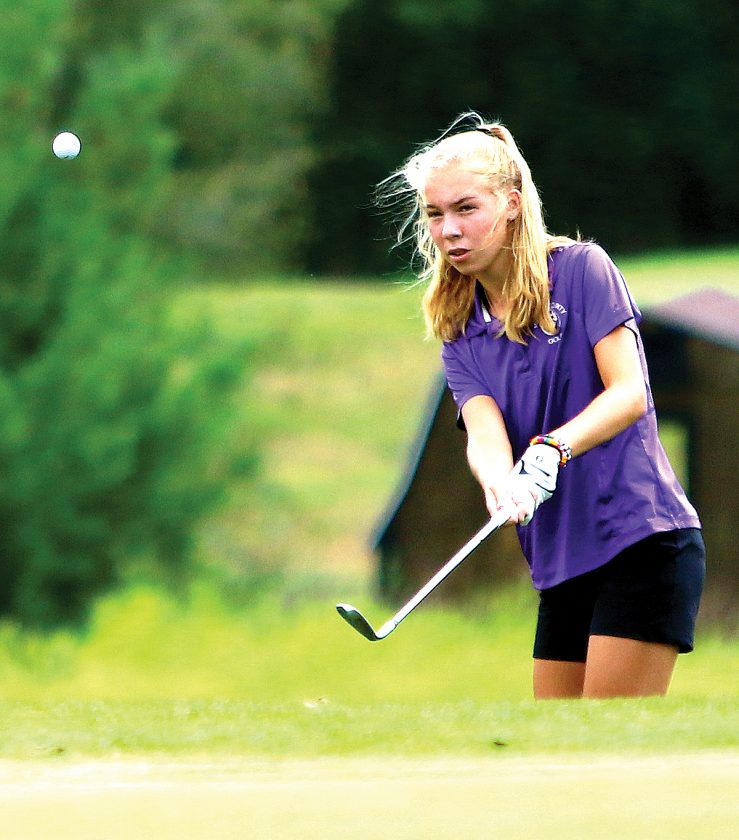 Sentinel photo by MATT STRICKER
Mifflin County’s Kolbi Knode chips to the green during a Mid-Penn golf match held at the Lewistown Country Club in Lewistown.

LEWISTOWN – The Mifflin County golf team is no longer defeated.

After going 0-30 last season with a bunch of greenhorns, the Huskies came out poised and ready to play against the Mid-Penn Commonwealth in the season opener at the Lewistown Country Club on Wednesday.

“We are not defeated. Last year was a rough year, but we had a lot of young, inexperienced kids. The benefit of going 0-30 is they had a ton of playing time, got a lot better and it’s already paying dividends,” Mifflin County coach Aaron Bubb said. “First match of the year to come away with two wins is two more than we had all of last season, so we’re pretty happy.”

Kolbi Knode led Mifflin County with a 95. She started with a rough stretch, settled down and picked up her game down the back nine.

“She got off to a rough start. She triple-bogeyed her first hole and doubled-bogeyed her second hole, but she settled in and did a good job,” Bubb said. “I know she can do better. She knows she has better scores in her. For the conditions today, in our first match, there is nothing for her to be disappointed about.”

Sophomore Cole Chilson finished with a 98, Bryan Chilson shot a 99 and Brayden Eversole rounded out the official scoring with a 104.

“Cole shot our second-best score of the day. He’s an athlete. He plays basketball and baseball. He’s a natural athlete and golf doesn’t always come easily to him, but he works hard at it,” Bubb said. “A 98 on a day like today on a pretty tough course. I’m happy for him.”

“We had four scorers in the 90s, unfortunately, one of them was from our number six player and doesn’t count in the scoring. When we did our qualifying on Monday, there was a 12 shot separation from our number one down to 13,” Bubb said. “We have a lot of athletes, good players that are all close to each other and that’s good. Competition breeds winning. Last year, we didn’t have that competition. People were locked into place. That’s not the case this season.”

The course was hard and balls tended to bounce all over the place. Even so, Bubb had zero complaints about the team score.

“Either this course or Valley Green (Red Land) are the two toughest courses we play on. Our team total today, 396, we can do better than that,” Bubb said. “It was a tough course. The greens were firm today. Balls hit right down the middle of the fairway rolled into the rough because of how fast and firm the course was. I’m not upset at all with our team total. I know when we get on some other courses the total will come down.”

Bubb loves the healthy competition sprouting up with his team. Hard work is key to keep progressing through the season.

“They have to keep the mentality up that you can’t relax. You have to keep working every day to get better because there’s somebody else waiting to take your spot,” Bubb said. “we have 16 kids out and 10 of those are freshmen or sophomores and they are hungry. They’re pushing some of the kids for spots and playing time. I’m happy where the scores are, but I know they can get better.”

Braden Rozell of Cumberland Valley was the overall winner with a score of 79.

Mifflin County travels to Valley Green at Red Land to take on the Mid-Penn Commonwealth on Monday.