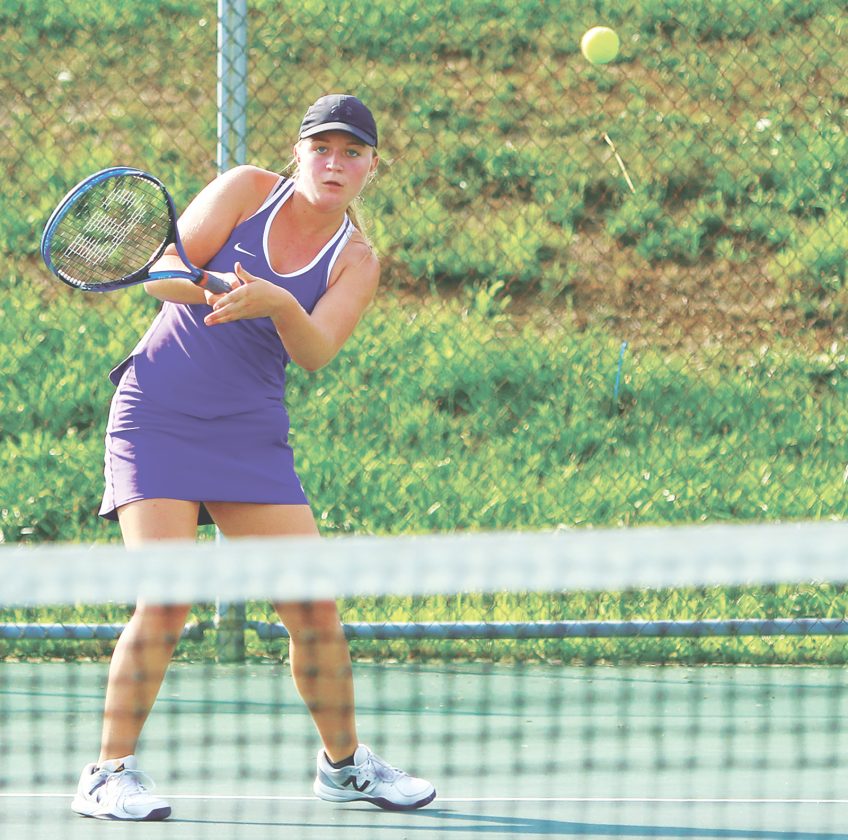 LEWISTOWN — The Mifflin County girls tennis team earned its first win of the young season on Wednesday evening. The Huskies won the match by a score of 3-2 over the Red Land Patriots.

After more than an hour of delay due to rain, Mifflin County played host to the match, which was supposed to begin at 4 p.m. didn’t start until after 5. A group of volunteers were tasked with brushing water off the courts in order to get the match underway. With another threat of rain, it was unsure whether this match would be played. But the rain held off, the courts were cleared of water, and the match began.

“We got out and warmed up, nobody had even started a game and it poured,” Mifflin County coach Glenn Kyle said. “So, we waited and when it stopped raining, we had a bunch of my ex-players from a couple of years ago, they came out and squeegeed it all off and by five o’clock, we were able to get started.”

The match was quiet, mostly due to the focus of the girls playing, but the heat might have played a factor. The air was hot and humid, and each of the players was trying to fight it in order to play her best tennis.

At the high school level, tennis relies heavily on the honor system, with each player responsible for calling what shots are in, and which came close to the line. While each match was played with respect, every so often, one girl would question the call to the other and a discussion would ensue. Due to the nature of the competition, each girl’s desire to win was on display, but it never got in the way of the sportsmanship of the game.

“This team (Red Land) was a lot like us. It was going to be who could outlast the other,” Kyle said of the competitive matches.

Mifflin County was able to take control of the doubles matches, winning both of them handily. The duo of Sky Curry and Kylee Rishel won their match by a score of 6-1, 6-0, while Lily Riden and Isabelle Wagner topped the Red Land team of Ton and Bittner, 6-2, 6-1.

Olivia Kahley struggled against Red Land’s No. 1 player, falling in straight sets, 6-0, 6-1. Jalynn Yoder was able to play well against her opponent, winning with relative ease with a score of 6-2, 6-3.

Sydney Kyle played the longest match of the evening, taking around two hours to complete. Kyle was able to secure the first set, 6-4, but fell to her opponent, 1-6, in the following set. With the match all squared, Kyle went into the final set with a chance to pull out the victory. What happened was a marathon of a set, eventually reaching a 6-6 tie.

With both girls playing well, it was a shame someone had to lose, and it was Kyle who fell in the tiebreaker, 7-2. Despite the loss, Glenn Kyle was proud of his player, who happens to be his daughter.

“She probably played for two hours and it can be that way,” Kyle explained. “But I’m proud of her, she really played and gutted it out until the very end.”

Overall, it was a successful day for Mifflin County tennis as it secured the first win of the season and played good tennis as a team.

“We have a lot of fairly consistent players who will really gut things out. That’s how we have to play,” Kyle explained. “We all have to learn every time we play. That is what I try to emphasize to them.”