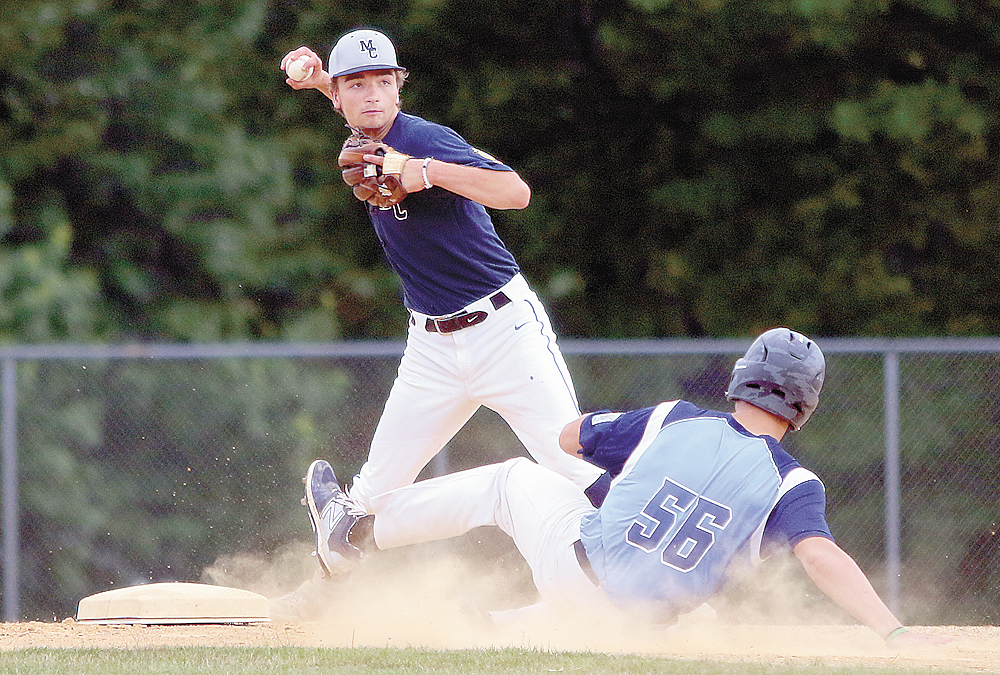 LEWISTOWN — Mifflin County Post 287 coach Bernie Howard loves playing small ball and the evidence of that was on grand display in the opening round of the double-elimination Central Penn League American Legion baseball playoffs on Thursday.

Post 287 scored four times on the squeeze play to rally from a 4-1 deficit for a 11-5 victory over Huntingdon at Mifflin County High School.

Today, the local club travels to Beech Creek. The Crickets defeated Altoona 3-1 in the day’s other first-round game.

“People can say what they want, but small ball is electric. Once we got that rolling, everything else just followed suit,” Howard said. “Guys hit the ball really well. This is the longest stretch in Legion ball I can ever remember of down time, so we were a little rusty at the start. This is a team win. It’s an old cliche but it’s true.”

Colby Bodtorf led off the inning with a double to left and scored when Ethan Eichhorn reached on an error, giving Post 287 a 6-5 lead. Noah Wright went to first on an error and Tyreen Smalley reached on a fielder’s choice bringing home Wright. Jaxon Pupo walked to score Eichhorn. Wright, Pupo, Connor Yoder and Jared King all plated on errors.

Speed kills and Smalley got the comeback going in the fourth with his wheels. Down 1-0, Smalley singled to right, stole second and later came home on the squeeze bunt by Connor Yoder. Smalley had such a big jump he was three steps from home when Yoder laid down the bunt.

“Tyreen is probably as good a base runner as we have, against (Seth) Smith, who has an excellent move for a left hander, he stole second, moved up and scored on the first squeeze. He was a step away from stealing home,” Howard said. “Connor Yoder put down a beautiful bunt and that opened the door for us and we followed through from there. Big win.”

Huntingdon regained the lead at 4-1 with three runs in the fifth. Justin Shetrom brought home two with a double to deep left and Payton Hack singled up the middle to drive in a run.

Post 287 took the lead at 5-4 when Eichhorn scored on an error, Smalley brought home Wright on the squeeze and later plated on an error. Pupo scored the final run of the frame on a wild pitch.

Huntingdon started things off with a run in the first when Matt Harshbarger doubled to left and crossed home on a knock to center by Draven Zook.

Bodtorf picked up the win in relief. He went an inning and a third, giving up one hit with two strikeouts. Connor Cherry started the game and tossed five-plus, allowing five runs, three earned with four strikeouts and four walks. Harshbarger took the loss for Post 24. He gave up three runs, none earned, on one hit.

“Connor Cherry kept us in this. He did an excellent job and he went the maximum number of pitches,” Howard said. “We played excellent defense, we used some power and definitely used the small ball. Colby, who will start tomorrow did a great job of closing the door. We had to keep him under his pitch limit and we did. This was a nice win. It really was. The guys did a great job.”

“We have to go back out and be ready tomorrow. It’s another big game. They all are at this point,” Howard said. “Like they say, it doesn’t matter who you play it’s how you play and tonight, we played a good game.”