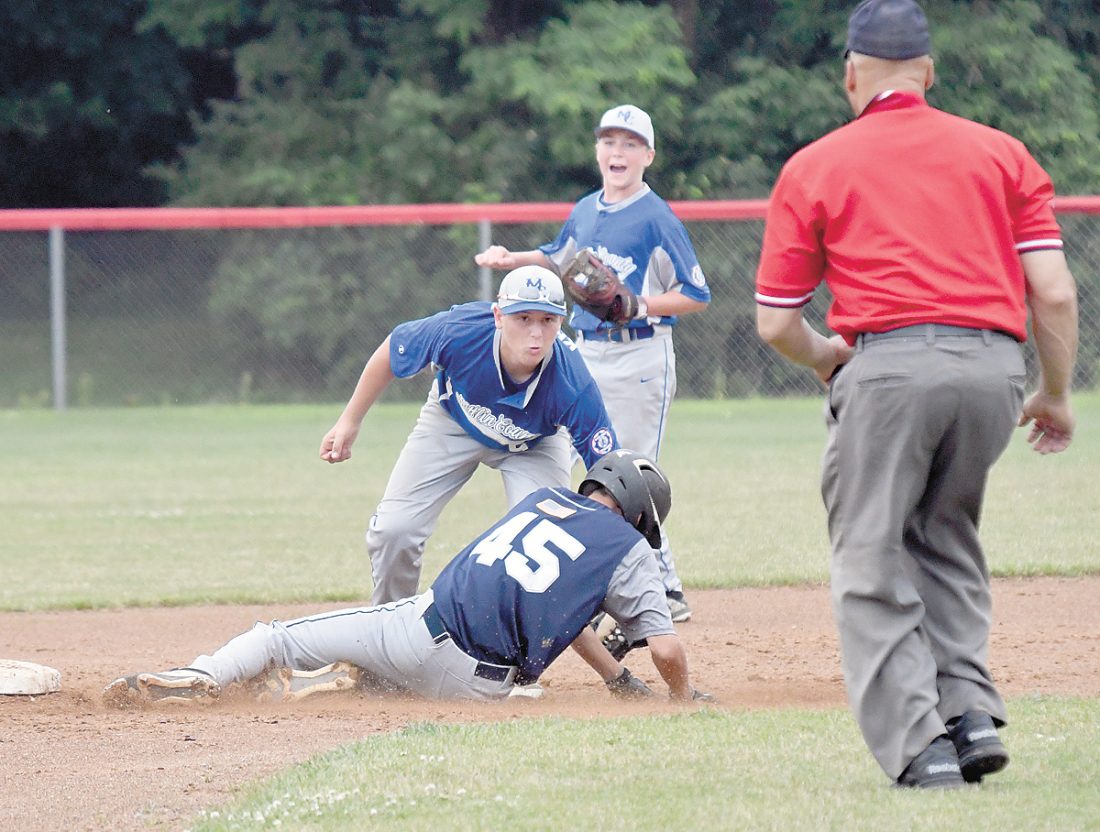 WILLIAMSPORT — Mifflin County has won enough postseason games to know just how difficult it is to win a state championship in Babe Ruth baseball.

On Thursday it was reminded of that, stumbling out of the gate and never recovering against a tough Broomall Newtown team in a 13-0 defeat in the first pool play game of the Babe Ruth 14-year-old state tournament at Williamsport’s Robert B. Logue Memorial Field.

Mifflin County surrendered three runs in the first inning and gave up nine more over the final three frames.

Broomall Newtown was the beneficiary of a dominant pitching performance from Justin Brennan, who threw six shutout innings, needing just 71 pitches. Brennan yielded just three hits in the contest and struck out three, while the Broomall Newtown bats pounded out 18 hits. Mike Cowan worked around two walks and stranded the bases loaded to finish the shutout.

“I thought we were a little laid back today,” Mifflin County manager Justin Yoder said. “This team is a laid-back team and they’re going to need to pick the intensity up.”

Broomall Newtown pushed three runs across against Preston Arbogast in the first inning on three singles and a two-run double by Alex Bruno. Catcher Matthew Weimer helped Mifflin County escape further damage by throwing out two runners attempting to steal second base to end the threat.

“In the first few innings we gave them a few runs,” Yoder said. “But credit them, they’re a great team. They had 18 hits and they had great pitching. In my opinion you aren’t going to see a better pitcher than [Brennan] in this tournament.”

Trailing 4-0, Mifflin County tried to reclaim momentum with a five-pitch inning from Arbogast that sat Broomall Newtown down in order in the third, but the Mifflin County bats failed to answer.

Mifflin County stranded Logan Stimely after a single and Kaden Mitchell, who doubled. in the second inning, and left the bases loaded in the seventh.

“In districts we were that way — we just can’t find the timely hits,” Yoder said. “We only had three hits today. We were in position and I think that if we could have scored in the second or third inning when we had runners on, we could have put pressure on them.”

Broomall Newtown’s Owen Mathes and Jonny Small each had four hits in the No. 3 and No. 4 spot, respectively, while Mathes had three RBIs; Small and Bruno had two. Mathes also stole home on a double-steal to score a run in the seventh.

Mifflin County’s Mitchell had two of the team’s three hits, finishing with a single and a double. Mitchell reached base in all three of his plate appearances.

Mifflin County’s Julian Kraniak made a couple good plays at shortstop, charging into left field to catch a fly ball over his right shoulder. Tucker Crum pitched decently in relief, throwing 1.2 innings in which he yielded five hits and three runs. Zach Snook finished the game on the mound, throwing the final inning and yielding three runs — although two errors extended the inning.

Yoder said that the key for rebounding is a quick start.

“We have to regroup, and we have to play hard,” Yoder said. “We need to start from the get-go. I was telling them if you put pressure on teams in Babe Ruth, good things will happen. We just have to put pressure on the other team.”