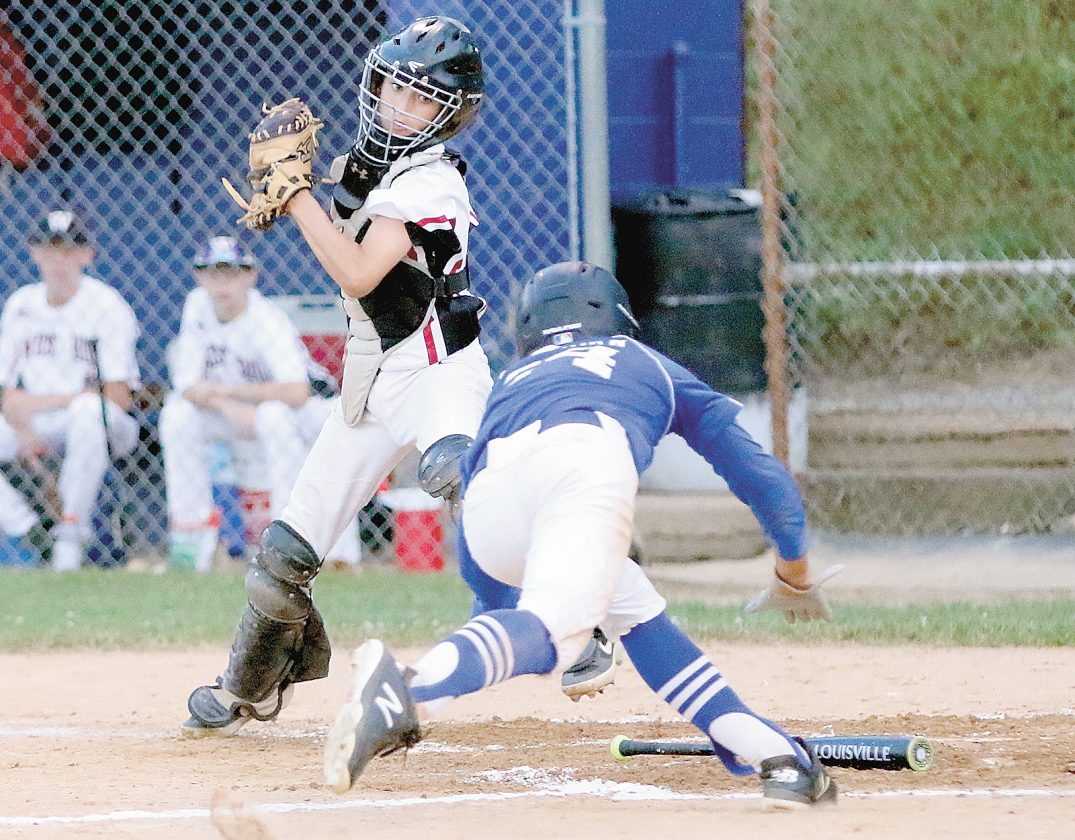 MILROY — Mifflin County took the lead in the second inning and never looked back as it defeated West End 14-4 in the Babe Ruth 13-year-old state baseball tournament Thursday.

The win marked the 700th victory in manager Bill Corbin’s career in Babe Ruth baseball as well as the 700th win by a Mifflin County Babe Ruth all-star team, just days after Mifflin County’s 1,000th game was played on the same field.

In his 37 years as the manager for Belleville, Corbin amassed a 611-342 record. Add that to an 89-38 record as the manager for Mifflin County in all-star play, which gives Corbin his milestone. He already held the state record for wins by a Babe Ruth coach before Thursday.

After Deakon Schaeffer drove home the game’s final run in walk-off fashion, the Mifflin County team and its fans were ready to congratulate their manager on an outstanding milestone. But Corbin was focusing on his team’s next game.

“They’re making a bigger deal of it than I am,” Corbin said, appreciative of the celebration of his 700th win. “It’s just a game.”

Xavier Smith started the contest for Mifflin County and pitched five innings of four-run baseball, three of which were unearned. Smith allowed one walk and three hits while striking out four batters. Landen Eichhorn relived Smith in the sixth inning and pitched a perfect frame.

“I thought he (Smith) pitched really well,” Corbin said. “I think all of the runs were unearned, except for one, which was the dribbler back to him.”

In the bottom of the second inning, Mifflin County got its offense started with two RBI-fielder’s choices off the bats of Tucker Gill and Trace Brought. Mifflin County would add three more in the following inning as Smith drove in Caden Wolfley with a double to left-center field.

Eichhorn reached on an error and stole second base. The catcher threw the ball back to the pitcher, Makai Day, who threw the ball to third, trying to catch Smith offguard. But the ball got past the third baseman, allowing Smith to score. Eichhorn scored on a wild pitch, giving Mifflin County a 5-0 lead.

However, West End rallied for three in the top of the fourth, highlighted by a two-run double from Gage Martzall. A single from Day in the top of the fifth inning would drive in another run for West End, closing the Mifflin County lead to 5-4.

Clinging to a one-run lead, the Mifflin County offense would explode for eight runs in the bottom of the fifth inning. Deakon Schaeffer and Trevor Sheaffer would deliver RBI-singles in the inning while Gill drove in another on a sacrifice fly. Back-to-back walks to Smith and Ryan Kanagy plated two more as Caden Brumbaugh finished the scoring for the inning with an RBI-fielder’s choice.

With a 13-4 lead, Eichhorn came in and shut the door, giving Mifflin County a chance in the bottom of the sixth inning to win the game by the 10-run mercy rule. Schaeffer’s single to center ended the game and got Mifflin County on the right track to start the tournament.

Coming off the district tournament in Williamsport where Mifflin County struggled to score runs, Corbin was pleased to see the 14 runs his team scored.

“It was nice for us to finally find some holes today,’ Corbin said. “We hit the ball hard and they fell.”

Even though they defeated a rival team handily, Corbin knows that West End is a better team than what it showed tonight, playing in close games throughout all-star competition.

“And they’re a better team than us being able to 10-run them. We saw they could beat us, last week,” Corbin explained. “We’re two, fairly evenly matched teams. The wheels just came off for them.”

Corbin expects the team to keep its focus on the remainder of the tournament. In districts, Mifflin County won its first game relatively easily, but lost its next two. Corbin is going to try to make sure that doesn’t happen to them in the state tournament.