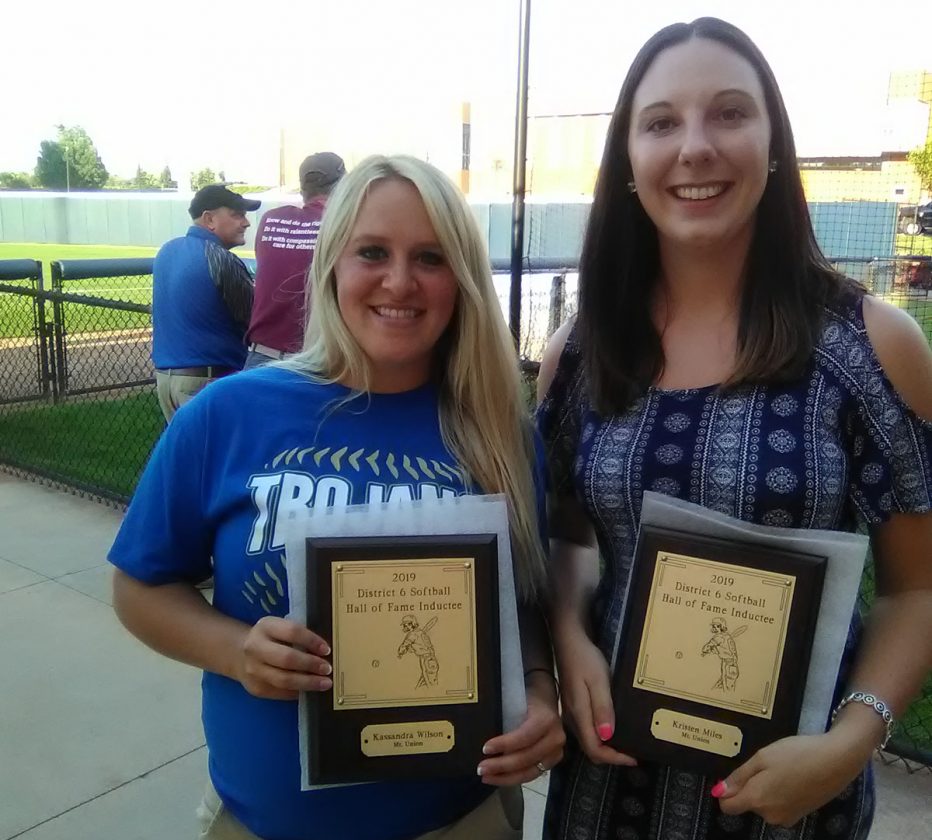 The All-Star contest consists of two games of five innings each allowing everyone a chance to play. The old format was one 10-inning game.

Wilson was a two-time all-state selection who graduated in 2010. She is second on the Mount Union hits list with 101. Renae Hobbs-Suchan leads with 106. Atherton collected 79 RBIs, 36 extra base hits with 26 doubles in her career. She hit .548 as a senior, the best average in the nation that year. She is currently the junior high coach for his alma mater.

“I’m definitely honored to be a part of something like this. To be given credit for all the hard work you’ve done over the years is a great feeling. It’s nice to be a part of it.,” Wilson said. “I didn’t even know it was a thing until last year. It’s an honor. It’s nice to be inducted with Kristen. Her and her sister, you don’t want to be at third or shortstop when they’re hitting. It’s like a rocket. We still play together, so it’s nice to be inducted with someone you still play with.”

“It’s absolutely amazing (to be inducted). I never really believed I would get in. When Dennis (Drake) got a hold of me and told me, I thought it was awesome,” Miles said. “You look forward seeing the other girls who played softball that you looked up to, so it’s good to be nominated for something like this. It’s awesome being inducted with Kassandra. She was one of those girls you looked up to playing ball. She was so good. It’s awesome to be included in something with her,”

District 4 had too much of everything for District 6 to overcome in a 11-2 victory in game one. The pitching of Savannah Doney and the hot bats of District 4 took control of the game early.

Doney went three innings of no-hit ball. District 4 opened up an 8-0 advantage with three runs in the second and five in the fourth.

District 4 kept pouring it on with three runs in the fifth, finishing with 12 hits in the game. Kam Harris (Philipsburg-Osceola) suffered the loss for District 6.

District 6 scored its only runs in the fourth when Harris walked, scored on a triple to center by Emily Claar (Claysburg-Kimmel), who later plated on a sacrifice fly to center by Mount Union’s Madison Harris.

In game two, Emily Snyder and Lynna Robertson picked up where Doney left off – throwing five innings of two-hit, shutout ball as District 4 posted the 2-0 victory.

Mount Union’s Madison Harris was 0-for-1 with a sacrifice RBI in game one. Teammate Payton Low went 0-for 2.

Mifflin County’s Alyssa Schnell was 0-for-2 in game two. Schnell is headed to Lehigh but she won’t play softball for the Mountain Hawks.

“It’s nice, It’s a great way to end my high school career, playing with people who are really good,” Schnell said. “It’s cool to be with girls with the same ability level and to face good pitching. Most of the girls I didn’t know and it was cool to get to know some of them. Some of the schools I never even heard of.”

Only graduated seniors are eligible to play in the all-star game under PIAA rules.